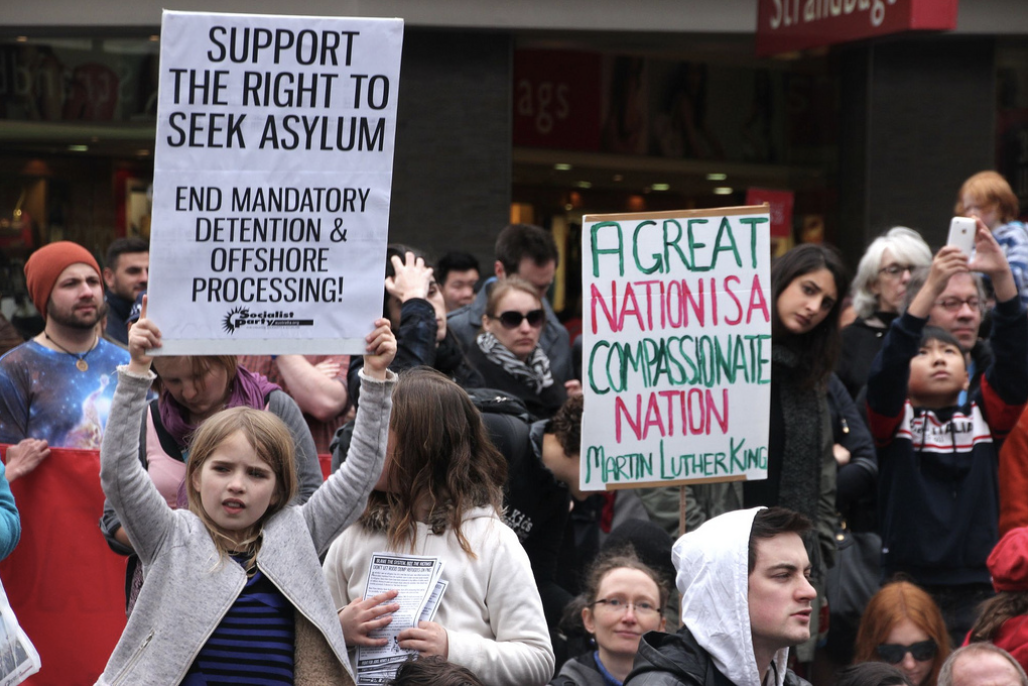 Summary: Civil rights groups have filed a federal lawsuit on behalf of East Bay Sanctuary Covenant, Al Otro Lado, Innovation Law Lab, and the Central American Resource Center in Los Angeles that challenges the asylum ban signed by President Trump on the morning of November 9th. This lawsuit charges the Trump administration for violating the 1965 Immigration and Nationality Act, as well as the 1946 Administrative Procedure Act. President Trump’s invocation of national security powers could overhaul long-standing asylum laws that would lead to the deportation of thousands of refugees seeking protection from persecution.

Less than six hours after President Trump signed a proclamation preventing immigrants who illegally enter the U.S. from applying for and receiving asylum, civil rights groups began legal recourse. The American Civil Liberties Union, Southern Poverty Law Center, and Center for Constitutional Rights filed a complaint in the US. District Court for the Northern District of California. They allege that the Trump administration’s new asylum ban is illegal, because it violates both the U.S.’s immigration law as well as the federal statute that determines how administrative agencies can issue new rules.

Trump’s policy to restrict asylum for people crossing from Mexico and Central America has been implemented incredibly quickly. Just over the last few weeks, Trump’s intense focus on preventing the migrant “caravan” from entering the U.S. has lead to a drastic increase in restrictions against immigrants applying for asylum. Under the current Immigration and Nationality Act of 1965, immigrants who enter the U.S. legally or illegally are allowed to apply for asylum. However, they can still be subject to specific restrictions.

The Trump administration is attempting to use a two-part strategy to legally bar a vast number of immigrants who are attempting to enter the U.S. from Central America. First, the Trump administration added a restriction to who could seek asylum and who was subject to a presidential entry ban, similar to the one signed in 2017. Second, President Trump signed an entry ban on people who attempted to enter the U.S. from Mexico without going through official ports of entry. As a result of these two strategies, anyone who attempts to cross into the U.S. without going through official ports of entry from November 10th, 2018 to February 8, 2019 will not be eligible for asylum. Instead, they’ll only be eligible for an alternative process called withholding of removal or protection under the Convention Against Torture.

Someone who attempts to enter the U.S. from Mexico between official ports of entry would still be granted an interview with an asylum officer, but under Trump’s asylum ban the officer would no longer be required to screen for a “credible” fear of persecution due to race, religion, national origin, political opinion, or membership in a social group. Instead, the officer would only have to screen for “reasonable” fear, which is a much higher standard that requires a determination that persecution is more likely than not, instead of a significant possibility. The use of “reasonable” fear in asylum determinations is incredibly rare, and is only saved for people who have already been deported but have returned again or people who have committed a serious crime in their home country. The impact that the distinction between “credible” and “reasonable” has on people who pass asylum interviews and receive court dates is drastic: 75 percent of all asylum seekers pass credible fear interviews, and only about 25 percent pass reasonable fear interviews.

People who no longer pass the reasonable fear interview will be deported summarily, but people who do pass still aren’t eligible for asylum, only withholding of removal or protection under the Convention Against Torture. Although these two options would both allow the individual to stay in the U.S. legally, it’s much more difficult to receive and it doesn’t present a pathway to permanent residence in the U.S.

Because the number of asylum applicants in the U.S. has soared from five thousand in 2008 to ninety-seven thousand in 2018, a large number of people would be affected by the new policies. Thousands of asylum seekers from Central America could be immediately turned away and sent back to their home country, where they could likely be subject to the exact persecution that they were initially trying to escape.

The Trump administration attempts to justify this new policy by arguing that most asylum seekers are using credible fear screening in order to illegally sneak into the U.S. The administration believes their claims are fraudulent or don’t provide proof of persecution that would reach legal standards of asylum. Instead, these immigrants simply apply for asylum in order to be legally allowed to remain and work in the U.S. as they wait for their court date, then disappear before the date in order to remain in the U.S. illegally.

The Trump administration argues that the low approval rates of asylum applications is evidence that most asylum claims are not only insufficient, but also malicious in its attempts to defraud the system. In fiscal year 2016, the last year for which full statistics are available, 26 percent of all asylum cases decided in court resulted in absentia order, otherwise known as an order of deportation due to the defendant missing court. However, a CLINIC/ASAP report discovered that most families that missed court dates did so due to confusion, bad information, or unclear directions. Families weren’t purposefully missing court dates because they knew that their cases wouldn’t be approved – they were simply lost in the system due to bureaucratic insufficiencies.

President Trump also alleges his new immigration policy is crucial because the current system is overwhelmed; as a result, asylum seekers can wait days, or even weeks at the U.S.- Mexico border in order to present themselves to U.S. border inspectors.

However, despite all of the Trump administration’s arguments for why this policy is necessary, critics argue that President Trump’s asylum ban is still a violation of two distinct U.S. laws – the 1965 Immigration and Nationality Act, and the 1946 Administrative Procedure Act. This is because using the Immigration and Nationality Act, Congress was very specific and clear: entering without inspection is not a basis to categorically deny asylum to refugees. Nevertheless, President Trump’s order categorically denies asylum to any immigrant who crosses in to the U.S. between ports of entry. While Trump is granted powers to fill in legislative gaps left by Congress in order to execute policy, neither he nor his administration have the right to override their clear commands, which is exactly what they’re trying to do.

Furthermore, pursuant to the Administrative Procedure Act, there’s a high bar for Presidents to skip the regulatory review process. However, critics argue that President Trump has not yet reached that high bar, because the Trump administration signed the proclamation without proper procedural steps and without good cause.

Because the Trump administration will surely appeal any ruling that it might receive, this case is almost certain to end up in the Supreme Court. If President Trump’s policy was to stand, thousands of refugees would be forced to return home – back to a place of danger, mistrust, and potential persecution. Regardless, Trump will not hesitate to overhaul the current immigration system at every opportunity he has.

Ellen Wang is a sophomore from Dallas, Texas, pursuing a major in Economics and a double minor in Political Science and Biology.