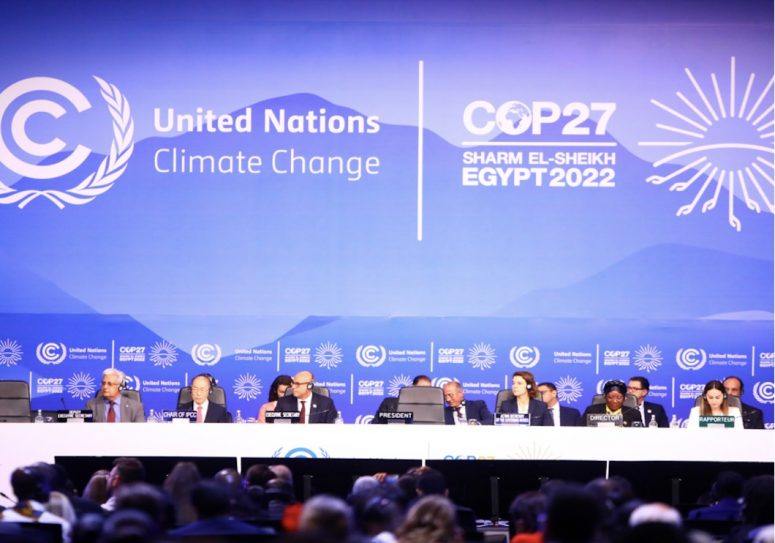 Adopted in 1992, the United Nations Framework Convention on Climate Change (UNFCCC) is a treaty aimed at “[preventing] dangerous human interference with the climate system.” The treaty has since been ratified by 198 countries and outlines a universal agenda for climate change action, ranging from sustainable energy alternatives to food security. Each year, the supporting countries convene in a Conference of the Parties (COP) to “increase ambition and implement existing goals and strengthen commitment.”

In the past, COP states have set bold benchmarks for climate goals under the umbrella of the UNFCCC. The Kyoto Protocol, which was established at the 3rd Conference of the Parties, was one of multiple initiatives designed to advance established climate objectives. It held developed countries accountable for climate change by “[setting] binding emission reduction targets for 37 industrialized countries and economies in transition and the European Union.” Another notable COP benchmark was the Paris Agreement, which was adopted in 2015 and “[limited] global warming to well below 2, preferably to 1.5 degrees Celsius, compared to pre-industrial levels.” Both the Kyoto Protocol and Paris Agreement continue to operate as amendments to the UNFCCC and have culminated in the 27th Conference of the Parties (COP27).

COP27 was held in Sharm El-Sheikh, Egypt from November 6th to 18th of this year. It was titled the “Climate Implementation Summit,” as it was expected to mark the fulfillment of “previous financial pledges for investing in renewable energy, building infrastructure to withstand extreme weather events, responding to climate disasters, and [more].” However, the conference has not been without controversy. The summit’s results have ignited critics who point to the COP’s failure to address fossil fuel usage—the main contributor to CO2 emissions—as hypocritical and a setback to climate change progress. Seven years ago, member countries agreed to tighten their fossil fuel restrictions annually to keep on track with their goal of limiting global warming to a 1.5 degrees Celsius change. However, this pledge has yet to be carried out and parties at COP27 wavered in their commitment to the Paris Agreement by motioning to abolish their 1.5 degrees Celsius standard and, therefore, avoid fossil fuel reductions.

Despite several countries’ efforts to undermine the Paris Agreement, COP27 made progress on growing issues posed by climate change. Among these was establishing a loss and damage fund, which will provide financial support to “nations vulnerable to climate disasters made worse by pollution disproportionately produced by wealthy, industrialized nations.” However, the fund “does not include liability or compensation provisions” and who will manage it remains undetermined. These conditions weaken the solidity of the promised fund and show the loose aura of accountability countries feel towards this agreement. The COP left many aspects of their plans unaddressed, though they did pledge to invest four to six trillion US dollars towards renewable energy every year until 2030. Although treaties between nations are legally binding agreements, the COP continues to amend and push back the timelines on their initiatives. This has created a cycle of promises that, if not acted on, yield little to no action over the years.

Unfortunately, the COP27 loss and damage fund—like the billion-dollar budget the COP set for flood barriers, land preservation, and other damage mitigation—addresses only the symptoms of climate change rather than its source. This is the result of pushback from countries such as India and Saudi Arabia, which are leading a charge in defense of fossil fuels. The impact of their opposition took effect last year at COP26, where both India and China urged that the summit resolution dictate the “[phasing] down” of coal power rather than “[phasing] out.”

Thus far, the COP has not addressed fossil fuel emissions in their advisories and treaties; as a result, they have yet to make progress towards their “below 1.5 degrees Celsius” global warming objective. Their funds and initiatives only ameliorate the side effects of a larger climate crisis, which could be halted by the elimination of fossil fuels. Serious action is needed on behalf of the COP, which has been repeatedly criticized by Greenpeace and other concerned climate organizations. This trend of neglect was affirmed by this year’s COP27 draft agreement, which has been deemed “an abdication of responsibility to capture the urgency expressed by many countries to see all oil and gas added to coal for at least a phase down.” The consequences of the COP’s lacking initiatives are becoming more and more apparent, leaving people wondering what comes next and whether COP28 will bring vital fossil fuel reductions to fruition.