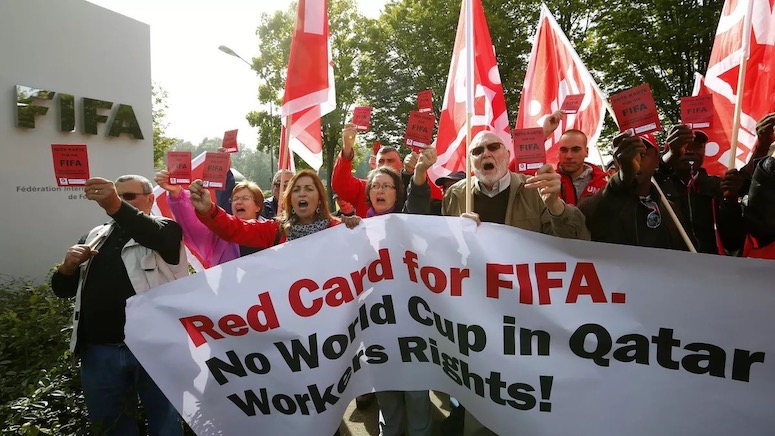 The 2022 FIFA World Cup has brought international fans together to root for their countries in the cherished game of soccer. Yet, the international backlash has never been as prominent with heated discussions about FIFA’s bribery of committee members and host country Qatar’s human rights abuses of the migrant workers.

Controversy surrounding Qatar’s position as the host country of the 2022 World Cup began back in 2010. Despite Qatar’s soccer team never qualifying for the World Cup or having any infrastructure to support the tournament, the peninsular Middle Eastern country was able to secure the coveted spot as host, beating out countries such as the United States, Japan, and Australia. However, two months prior to the publicized announcement, two of the twenty-four FIFA committee members designated with the task of choosing the host country were suspended due to accusations of accepting bribes. Later, leaked emails showed evidence of a Qatari soccer official and former FIFA executive member Mohammed bin Hammam paying millions of dollars in bribes to officials to set Qatar as the host.

Numerous schemes have been uncovered in the twelve years since the announcement. In 2015, the US Department of Justice had unsealed indictments against nine FIFA officials that were accused of multiple crimes from money laundering to racketeering to sell broadcasting rights for the tournament. Soon after, Sepp Blatter stepped down from his role as FIFA president following a successful reelection for a fifth term, ending a seventeen year long reign that was marred with signs of corruption from the start. Since then multiple people have either come forward or been exposed to taking million dollar bribes to vote for Qatar.

Qatar is a small country on the Persian Gulf, not even the size of the US state of Connecticut. However, it had a lot to gain from hosting the World Cup. Apart from the personal bribes, Qatar was seen as an opportunity for FIFA to expand its market into the Middle East. This was a business decision by FIFA to tap into the wealthy crowd of oil oligarchs who could support the organization financially in the future. Meanwhile, Qatar wanted to use the World Cup to promote positive press and gain a greater standing within international relations.

Controversy around Qatar’s appointment only intensified once the construction of the vast infrastructure began. The country had to start from scratch with the construction of eight stadiums, a new metro system, hotels, and more valued at an estimated $220 billion. This process employed thousands of migrant workers under the “kafala” system most of which were working in terrible conditions devoid of human rights. The kafala or sponsorship system currently exists in Jordan, Lebanon, and all of the Arab Gulf states, such as Qatar, except for Iraq. A local employer or “kaleel” sponsors foreign workers by allegedly providing travel expenses and housing in dorm-like buildings. In Qatar, foreign workers come largely from Nepal, Bangladesh, and India in search of a job that would allow them to send remittances back home. However, extreme corruption would leave them trapped inside of the work zones.

Many migrants encountered high recruitment fees by recruitment agents in their home countries from $500 to $4,300 which made them in debt by the time they reached Qatar. Furthermore, many workers reported lies about salaries as well as delayed payments which made it difficult to pay off the debts, further trapping them. The promised housing was far from adequate with reports of confined, dirty, and unsafe dorm rooms. To make matters worse, many migrant workers were not able to escape their conditions because almost all who were interviewed by Amnesty International reported having their passports confiscated. Furthermore, some workers weren’t provided the opportunity to obtain or renew their residence permits. This made many people scared to venture outside of their work zones due to the fear of being arrested without the ID-type cards. Furthermore, there have been many cases of recruiters illegally selling their employees workers visas to other employees.

Workers were forced to participate in dangerous work which brought the total death toll since the start of construction to over 6,500 people. A tournament spokesperson contested that there were only three work deaths and thirty-seven non-work related deaths, a clear ploy to cover up the mass migrant human rights abuses. If workers did not feel safe enough to participate in their jobs they would either be fired, deported, or imprisoned. The kafala system is under the jurisdiction of interior ministries instead of labor ministries, making it so that workers don’t have legal protection under Qatar’s labor laws.

While Qatar hoped that hosting the 2022 World Cup would bring positive international press, the response has been largely negative and critical of its treatment of workers. It has since prompted Qatar to create a labor dispute committee, state-backed worker insurance and support fund, and creation of the country’s first minimum wage. However, the question still stands whether these actions were performative to appease the negative international press. Amidst the tournament’s many restrictions, it doesn’t look like the Qatar government is taking the criticisms to heart.