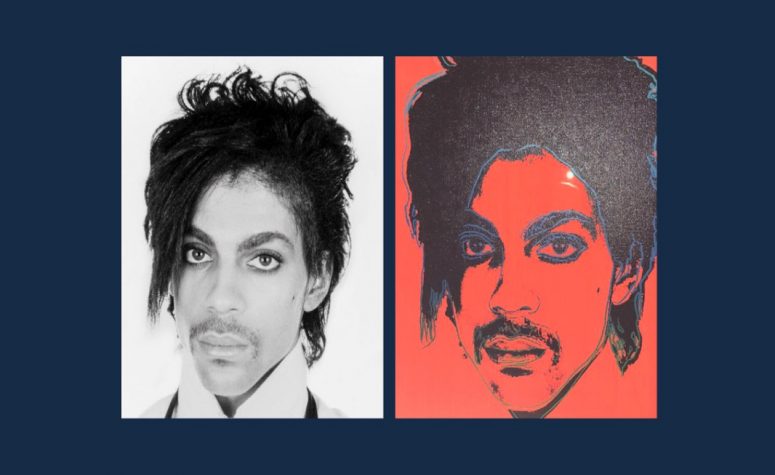 In 1981, Lynn Goldsmith, a famous photographer of rock stars and the like, published a would-be famous image she took of Prince. Newsweek had commissioned Goldsmith to photograph him as his alluring style of music and performance entered pop culture. The magazine went on to use an image she took of him performing at a concert, prompting Goldsmith to table the other images she took of the artist in her study.

Three years later, Prince’s influence had erupted. Vanity Fair asked Andy Warhol, one of the world’s most prominent artists known for his style of pop art compositions, to create an illustration of Prince. As a reference point, Goldsmith’s image was bought by the magazine to help Warhol with his creation. From here, Warhol created the Prince Series, consisting of sixteen silkscreen illustrations of Prince with different colors and patterns. Vanity Fair only chose one of Warhol’s illustrations for the magazine, and they issued a small credit to Goldsmith in the publication.

In 2016, Prince passed away from an accidental drug overdose. His death came as a shock to many, as hearts broke around the globe at the loss of the incredibly talented and beloved star. Condé Nast, the magazine conglomerate in charge of Vanity Fair, paid tribute to Prince by publishing various images to commemorate his life. In this tribute, the magazine included another image from Warhol’s series, Orange Prince, and paid the Andy Warhol Foundation $10,250 to do so. In this publication, Goldsmith received no credit or payment.

Goldsmith would go on to sue the foundation, stating that Warhol infringed on her copyright. She believed the foundation owed her millions of dollars in royalties and unpaid licensing fees. The foundation acknowledged that Goldsmith did copyright the series, but countered her statement by saying that Warhol’s artwork was “transformative” because the painting is distinct from Goldsmith’s photograph. He believed he had given the photo a new “meaning and message,” through his alterations which included the alteration of the angle of Prince’s face, the removal of his torso, changes in tones and lighting, layers of color, and outlines to emphasize his features.

Under the Copyright Act’s fair use doctrine, a “transformative” use is defined as one which “adds something new, with a future purpose or different character and does not substitute for the original use of the work.”  The court examined the question: what is the proper test for whether a work is “transformative” under the first factor of the Copyright Act’s fair use doctrine?

The U.S. District Court found that Warhol’s series was in fact “transformative” as there is a clear message separating it from Goldsmith’s photograph. Upon appeal, the Second Circuit Court disagreed, stating that it is not the role of a judge to be an “art critic,” determining what the meaning of the composition truly is. Since the work was “recognizably derived” from Goldsmith’s photograph, it was not fair use as it failed to transform the meaning of the original. If the Supreme Court confirms the decision of the Court of Appeals, the Andy Warhol Foundation must pay Goldsmith the sum of money she desires.

If Goldsmith wins, she could seek an injunction against the Prince Series being reproduced any further. Therefore, the Andy Warhol Foundation would no longer be allowed to print or license copies of the series in any format. Without an injunction, Goldsmith will likely still be able to prevent further reproductions due to Section 103(a) of the Copyright Act, which states that “protection for a work employing preexisting material in which copyright subsists does not extend to any part of the work in which such material has been used unlawfully.” People who currently own a work from the Prince Series would have to think twice before selling or even displaying the painting.

A decision favoring the Andy Warhol Foundation could make it incredibly difficult for photographers to implement licenses for artistic replicas of their piece. On the other hand, a decision favoring Goldsmith may prompt a transformative shift in the art industry. Nowadays, sampling of both sounds and images has become highly practiced as a method to transform digital images of famous moments and people into artwork. While many affluent people would still be able to obtain licenses for their work, new unknown artists may struggle to do so, turning art into an exclusive commodity rather than a creative outlet.

The case was heard on October 12, 2022, and the decision is still pending.