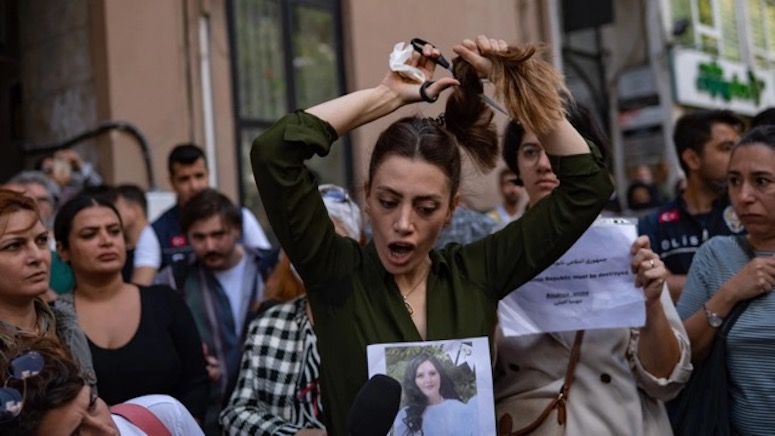 “Women. Life. Freedom.” This repeated mantra represents the height of the Iranian protests that erupted mid-September. At the front of the movement is martyr Mahsa Amini, a 22-year old woman who died following an arrest by the “morality police,” a special sect of the law enforcement that exists to enforce religious observance including compliance with the modest dress code for women in public, for wearing her hijab too loosely. Witnesses reported seeing Amini beaten in the car following the arrest. However, the government denies all such claims. Three days later on Sept. 16 in a hospital in Tehran, Amini was pronounced dead due to a skull fracture. The next day nationwide protests erupted across the country which have since resulted in internet shutdowns and mass civilian deaths caused by Iranian security forces.

Wearing a hijab became legally required in April 1983 following the Islamic Revolution. In Book 5 of the Islamic Penal Code of Iran, Article 638 states that “anyone in public places and roads who openly commits a haram act, in addition to the punishment provided for the act, shall be sentenced.” A note follows stating the explicit sentencing of women who are not covered in public. This law enforces public segregation within all aspects of public life from familial structures to city spaces, expanding to all parts of daily life.

The national protests began in Kurdistan, a province largely inhabited by the ethnic minority Kurds, like Amini, who are predominantly Sunni Muslims as compared to Iran’s Shia majority. Iranian women have been protesting by cutting and shaving their hair along with burning their hijabs to push against the authoritarian regime. Although framed  exclusively as protests of women against the current rule, the reality of the demonstrations has been more diverse than ever before. They include a much more varied socioeconomic range of people when compared to protests in 2017 and 2018 whose issues mainly impacted middle class demographics. Furthermore, men have joined their wives, sisters, and daughters out on the streets in solidarity against the harsh rulings imposed against them. Additionally, Amini’s Kurdish roots have brought even more supporters to the protests who have been heard to shout “Zhina” in the streets. Zhina is Mahsa Amini’s true first name which her family was not able to register due to the ban on Kurdish names. The sheer number of dissenters have come out for a variety of reasons whether they are protesting against the regime’s continuous persecution of religious minorities or the imposition of laws that led to the societal degradation of women. However, on Sept. 19, all demographics, whether they have been protesting or not, felt the extent of the demonstrations once the internet began experiencing government shutdowns.

Some of the largest network providers have since experienced rolling blackouts, or temporary power outages. This is an act of censorship by the government because social media has been at the forefront of sharing information regarding the protests. This is not the only instance of the government employing technology in their favor. By utilizing traffic cameras created during the pandemic to check whether citizens are wearing masks, the government is now using this facial recognition technology to survey if women are wearing their hijabs or not. Thus, many protesters have been targeting cameras by hacking them. However, to little knowledge, following the rolling blackouts, the government is encouraging people to use networks that mirror China’s localization models that cut people off from the “global internet” and restrict them to only online information that the Iranian government wishes them to see.

In response to shutting down internet access and the violence against peaceful protestors, the United States has imposed further sanctions against Iran. It has identified seven senior leaders within government and security deemed most responsible for the shutdowns and continued sanctioned violence. As a result, the US has stated that US citizens must block and report all possession of property as well as interests in property of the senior leaders to the Office of Foreign Assets Control (OFAC). US citizens are barred from engaging in transactions with the leaders or entities owned by them. However, it is important to note that the Treasury Department has issued a license to exempt tech companies from the sanctions in order to allow the companies to make an effort to help citizens regain web access.

Over a month later, the protests still persist as the death toll keeps climbing up. “Death to the dictator” is widely heard, a direct threat to the Supreme Leader of Iran Ayatollah Ali Khamenei and his current rule which is facing its most daunting challenge yet. The distinction should be made that the protests are not a movement against the hijab mandate itself. Rather, they are protests against the forced assimilation of everyone having to conform to such rules.