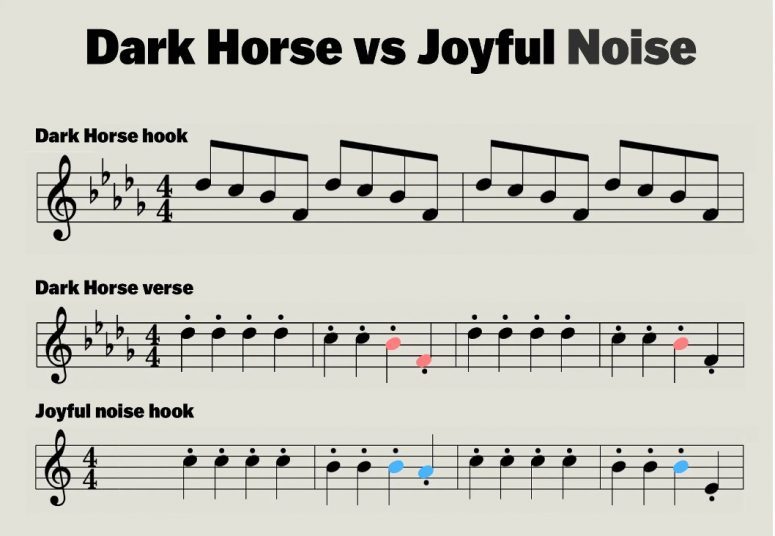 Lawsuits pertaining to music are often complex and unorthodox in the traditional world of law. Gray vs Perry is one such example. Gray vs Perry is a case that began in 2014 when Christian hip-hop artist Flame (Marcus Gray) sued Pop musician Katy Perry (Katheryn Elizabeth Hudson) in a copyright infringement lawsuit for plagiarizing an eight-note riff off his 2008 song “Joyful Noise” on her 2014 hit “Dark Horse”.

The current updates to the Gray vs Perry lawsuit have been made available as Katy Perry’s multi-year copyright infringement lawsuit has come to a conclusion stating that the pop musician and her record label are not liable for damages in the amount of 2.8 million through a federal appeals court on March 10, 2022.

Katy Perry’s song received several accolades, such as a nomination for Best Pop duo group performance at the Grammys, The Kids Choice Awards’ favorite song of the year, and the iHeartRadio Music Awards. The song also won the MTV Europe Music Award for Best Video and the American Music Awards Single of the Year. In 2014, The DJ for Flame claimed that the song was identical to the one he worked on: “Joyful Noise”. He stated that the initial riff is only ten beats per minute slower in its tempo and is only one pitch higher (see cover photo).

Additionally, Flame and his team utilized the claim that because “Joyful noise” is a Christain song, and Dark Horse’s riff uses imagery that is “associated with witchcraft, paganism, dark magic”, the new song’s makeup constitutes a form of defamation and therefore Flame and his team was entitled to damages.

This case went to the United States District Court for the Central District of California (Ninth Circuit). Judge Christina A. Snyder ruled against a summary judgment of the case. In order to make their case in the trial, both sides utilized musicologists and other musical experts to convince the jury. The plaintiff utilized a musicologist who highlighted how there were “five or six points of similarity”. For instance, by looking at the rhythm, the timber, and the articulation of the notes in both songs he tried to prove the similarity between these two pieces.

It is complex and difficult for a jury to truly analyze this type of case because the average American citizen will not be able to delve into the nuances of this particular musical debate or be able to make an informed decision on whether there existed enough of a similarity in the pieces for the defendant to be liable for damages. With the Katy Perry team, their musicologist argued that the similarities were not a sign of plagiarism but rather general swaths that can be found in many other songs. For instance, they referenced “Mary Has a Little Lamb” and “Merrily We Roll Along” as songs that share a similar melody with a descending minor key. A key quote that has been continuously highlighted by the Katy Perry team was that Flame was “trying to own basic building blocks of music, the alphabet of music that should be available to everyone.” Once that case had been deliberated on July 29, 2018, the federal jury found the Katy Perry team liable and guilty of copyright infringement. The jury then awarded Flynn $2.78 million, and Katy Perry, in particular, was named to owe Flame 550k.

In the appeals process, the Katy Perry team moved to Judgment as a Matter of Law in early 2020. Now, another key instance with this case is that the Central District of California, the Ninth Circuit, had an almost concurring opinion with a longer-term lawsuit regarding Led Zeppelin’s “Stairway to Heaven”, who had also been under copyright infringement for the song “Taurus” from the band Spirit. Given the decision that there was not a violation of copyright, the Perry Team utilized this particular case as a new precedent in the appeal process. As a result, on March 17, the judge overturned the jury award, largely highlighting the Led Zeppelin case in the other Central District of California decision. In this process, the judge vacated the verdict and denied the motion for a new trial. The case was then heard upon appeal at the Ninth Circuit in March 2022, affirming the judge’s decision and voiding the $2.8 million award to the Christian hip-hop artist.

The implication of this case is the fact that had Flame won, it would have set a slippery slope as to what a musician can own. This outcome would have led judiciary officials to ask, does the musician own particular rhythms, particular articulation, or particular sounds within music? Should that case have gone in Flame’s favor, it could have created the ability for musicians to monopolize certain rhythms, scales, and keys, limiting creative freedom for both small and large artists. So, for that reason, I think that the outcome of this particular case justifiably upheld artists’ rights to creativity.