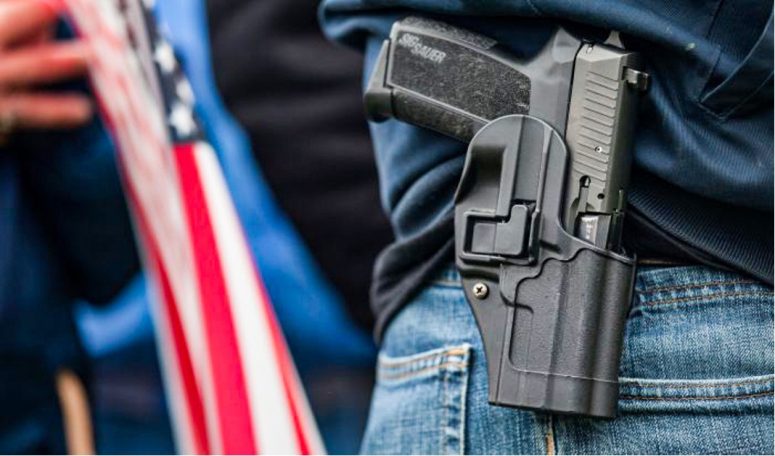 Brandon Koch and Robert Nash, who were both residents of New York that had a general interest in self-defense, applied for unrestricted gun licenses. This license would allow them to carry a handgun on public premises where it is legal, unless posted otherwise. Although Koch and Nash were law-abiding citizens, the state of New York denied both of their applications predicated on the failure to satisfy the “proper cause” requirement. The state of New York makes it a crime to possess a firearm without a license, whether inside or outside the home, but in order to obtain an unrestricted license, an individual must prove that “proper cause exists” under N.Y. Penal Law §400.00(2)(f ).

Petitioners Koch and Nash sued the respondents — the state officials who oversaw the licensing applications — for declaratory and injunctive relief, contesting that the respondents violated their Second and Fourteenth Amendment rights by denying their ability to get an unrestricted license without demonstrating an exceptional need for self-defense. This was, however, dismissed by the District Court and the Court of Appeals affirmed the District Court’s ruling.

Both the District Court and the Court of Appeals relied on the decisions established by the Second Circuit in Kachalsky v. County of Westchester, which had reinforced New York’s proper cause standard, holding that the requirement would survive constitutional scrutiny even if it implicated the Second Amendment and that it “substantially related to the achievement of an important governmental interest.”

In a 6-3 holding, the Court ruled that New York’s proper cause requirement violated the Fourteenth Amendment by preventing law-abiding citizens with ordinary self-defense needs from exercising their Second Amendment right to keep and bear arms in public for self-defense. In other words, states that enact strict limits on carrying guns in public are in violation of the Fourteenth and Second Amendments. This not only overturned the 100-year-old New York law, but also implicitly overturned similar laws in various other states.

The precedent District of Columbia v. Heller was cited wherein the Court comparably held that the Second and Fourteenth Amendments protect an individual’s right to keep and bear arms for self-defense, including within the home. Within Heller, there was a Second Amendment test established that the Court applies today, which requires courts to assess whether modern firearms regulations are consistent with the Second Amendment’s text and historical understanding. The Court is, furthermore, able to recognize that this test within Heller gauges the new circumstances that arise in contemporary society insofar as the reference to “arms” in the 18th century is not merely referring to the arms existent in that period.

To determine whether a firearm regulation is consistent with the Second Amendment, two points must be reckoned: first, whether modern and historical regulations impose a comparable burden on the right of armed self-defense, and second, whether that regulatory burden is comparably justified. Moreover, the Second Amendment has remained, from its adoption until the current day, unwavering in its wording that, therefore, supports the petitioners’ claims. In Heller, it states that “constitutional rights are enshrined with the scope they were understood to have when the people adopted them.” The Second Amendment was adopted in 1791, and the Fourteenth Amendment in 1868. The Court explicitly asserts that historical evidence that predates either time aforementioned “may not illuminate the scope of the right.” With these principles in mind, the Court deduced that New York has failed to meet their burden in showing that the proper cause requirement is consistent with this Nation’s historical traditions of firearm regulation.

Respondents directed the Court to the history of the Colonies and early Republic and identified only three restrictions on public carry from that time. This encompassed common-law offenses, statutory prohibitions, and “surety” statutes. Common-law offenses imposed some limits on firearm carry in the antebellum period, but there is no evidence indicating that these limitations impaired the right of the general population to peaceable public carry. Statutory prohibitions were enacted when some states proscribed concealed carry of small weapons, but there was a consensus that states could not altogether prohibit the public carry of arms protected by the Second Amendment. Surety statutes is entirely distinct from the proper cause requirement of New York as individuals had a right to public carry unless there was “reasonable cause to fear an injury, or breach of the peace.” Altogether, these three restrictions presented by the respondents diminished their argument.

Justice Thomas authored the opinion of the Court and further corroborated the fact that New York’s proper cause requirement fails to adhere to American tradition and the Second Amendment. He presented the information that 43 states issue licenses to carry based on objective criteria but six states, conversely, do not and unconstitutionally require a special need to carry.

The Second Amendment explicitly, yet generally, states the inalienable “right of the people to keep and bear Arms” that “shall not be infringed.” With respect to “people,” it does not exclude law-abiding citizens that are seeking permits for personal defense with no unique basis. In fact, many Supreme Court cases, including Heller, have justified that one of the fundamental elements of the Second Amendment is its inherent protection of individual self-defense. Any ordinary, law-abiding citizen should be subjected to the protective nature of the Second Amendment when seeking permits for their own defense. Although the philosophy of the respondents in this case indicates otherwise, self-defense is not foreseeable nor organized, but rather a mechanism used when one is imminently threatened.

Concerning the language “shall not be infringed” within the Second Amendment, it is merely dependent upon the historical tradition within the United States of the time. Additionally, the Court is emphatic in requiring governments to substantiate firearm regulations by demonstrating that the regulation is consistent with this historical tradition. Evidently, this tradition is nonexistent as only six states, including New York, use unusual discretionary policies. However, traditions are intact that preclude certain criminals from obtaining a permit, thus making it constitutional.

When determining the constitutionality of Second Amendment cases, it is imperative that judicial textualism be applied to prevent the undermining of historical traditions present within this Nation. Stare decisis must be preserved for constitutional precedents, such as in this case that was put before the Supreme Court.