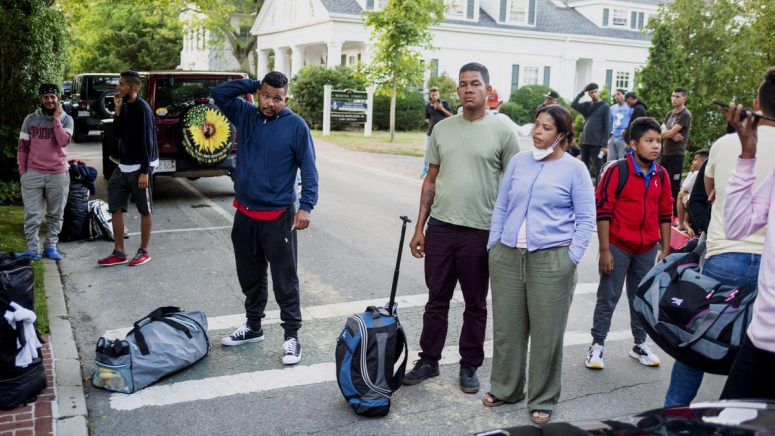 Last month, two jets chartered by Florida Governor Ron DeSantis’ administration landed in Martha’s Vineyard from San Antonio carrying 48 Venezuelan asylum seekers. The New York Times reports that the “political maneuver” was funded by a $12 million appropriation in Florida’s recent budget for a program run by the state’s Department of Transportation to “transport unauthorized aliens.” The mission was carried out by Perla Huerta, a former U.S. counterintelligence agent. The goal of the endeavor was to garner attention for the Republican anti-immigrant agenda and force primarily Democratic areas to deal with the repercussions of an influx of migrants. Upon arriving in Martha’s Vineyard, the undocumented migrants were given emergency shelter and eventually moved to a military base in Bourne, Massachusetts. Governor DeSantis faces a number of legal repercussions to his demonstration, three of which will be highlighted here.

Investigations surrounding the DeSantis administration deceiving the migrants have gained media traction in the past weeks. Bexar County Sheriff Javier Salazar has inquired about the potentially false pretenses under which the migrants were lured. Lawyers for Civil Rights, a Boston-based advocacy group, has filed a federal lawsuit against Gov. DeSantis and others involved in the relocation program. The Texas sheriff and advocacy group have called out the use of coercion to convince the migrants to board the plane. Huerta recruited the migrants by providing free meals and false promises. Investigators have found a pamphlet, entitled “Refugee Migrant Benefits” with fallacious information about Massachusetts regarding support services waiting for them in Martha’s Vineyard, including cash considerations. The pamphlet outlined that “income-eligible” refugees could receive “up to eight months of cash assistance.” After their flights, the migrants were also transported in unmarked vans to a community center where they were not expected. Salazar alleges that the actions were simply “predatory measures” that defrauded the migrants and calls for Washington to intervene to end the inhumane treatment.

The Florida Center for Government Accountability’s (FLCGA) has also filed a lawsuit against Gov. DeSantis’ office over the two charter flights that brought the migrants to Martha’s Vineyard. The group alleges that the governor’s office has not complied with appeals to release flight records and other information on the situation. The lawsuit argues, “defendants’ refusal to provide the records is unreasonable, unjustified and amounts to an unlawful delay.” The FLCGA is specifically looking for records about the flights, waivers signed by the undocumented migrants, and communication between Texas Governor Greg Abbott and James Uthmeier, Gov. DeSantis’ Chief of Staff. The New York Times has also revealed that Vertol Systems, the aviation company that executed the deportation, has strong ties with Gov. DeSantis and the Republican Party. The company has remained silent to date, but NBC News has also determined that Gov. DeSantis’ public safety czar, Larry Keefe, once represented the group in a series of lawsuits. Furthermore, the company’s leader, James Montgomerie, is a prominent donor to Republican legislators in Florida. This suit has come in addition to two others filed in the past month, adding to the surmounting legal pressure against Governor DeSantis’ office.

In addition to the many questions and denunciations surrounding the legality of Governor DeSantis’ actions, his financial maneuvering has also been subject to increasing scrutiny. The Boston Globe detailed a federal investigation against Gov. DeSantis regarding the illegal use of COVID relief funds to complete the migrant deportation. The US Treasury has opened a probe for the potential use of Florida’s State and Local Fiscal Recovery Fund (SLFRF) for the deportation program. Gov. DeSantis is yet to respond to the allegations, as his administration has held firm that the funds were put aside solely as part of the state’s most recent budget. Massachusetts Senator Ed Markey and five other members of the Massachusetts government inquired about whether federal funds were potentially misused in the transportation of the migrants. The US Treasury’s deputy inspector general, Richard Delmar, commented in an October 7 response to the inquiry that his office “will review the allowability of use of SLFRF funds related to immigration generally, and will specifically confirm whether interest earned on SLFRF funds was utilized by Florida related to immigration activities, and if so, what conditions and limitations apply to such use.”

A final key point of legal contention surrounding Gov. DeSantis is the absence of permission from Texas authorities, as the migrant transfer was allegedly executed without the knowledge of Texas Governor Greg Abbott. However, Gov. Abbott is unlikely to pursue legal action against Gov. DeSantis primarily for two reasons: a) his history with migrant relocation and b) the cohesion of the far-right Republican coalition. Gov. Abbot previously authorized the busing of over 11,000 migrants from Texas into more Democratic cities such as Washington, New York, and Chicago. Perhaps more importantly, the Republican party has united around a staunchly anti-immigration agenda. The lack of internal repercussions sets a dangerous precedent for capabilities of the far-right Republican sect. Moving forward, these unhinged actions are likely to become more frequent if Gov. DeSantis can escape without any sort of penalty.