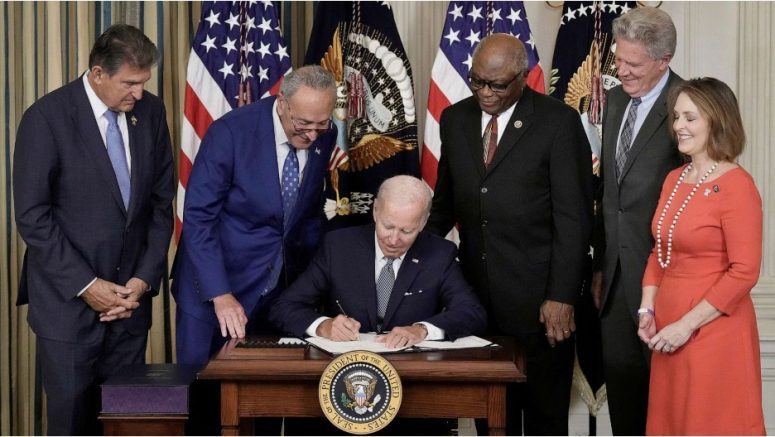 ​​Following months of contention between Senate Democrats and Joe Manchin, the Inflation Reduction Act was finally signed into law on August 16, 2022. The act is set to raise over $700 billion – mostly through tax reform – to reduce costs of prescription drugs and healthcare, authorize $300 billion in deficit reduction, and invest $386 billion in climate and energy spending. This massive investment in climate and energy has been celebrated by environmentalists around the globe as the most ambitious climate action the United States has taken in its entire history.

Projected to bring a 40% reduction in greenhouse gas emissions by 2030, the Inflation Reduction Act is a major step forward in helping President Biden achieve his pledge to 50% emission reductions by 2030. This help comes at a pertinent time, particularly after Biden’s $1.7 trillion Build Back Better Act died in Congress earlier this spring and the Supreme Court’s West Virginia v. EPA curtailed the Environmental Protection Agency’s powers this summer. What seemed like a bleak year for climate action has started to look up, with the act renewing hopes that the U.S. will take serious steps to address climate change.

While the Inflation Reduction Act is not the be-all and end-all solution to climate change, it is significantly wider in scope than any previous U.S. climate legislation, and it works to address many different climate issues through a wide range of provisions. These provisions can be broadly categorized into four main groups:

Transportation is the leading source of greenhouse gas emissions in the U.S., so any major emissions reductions in the country necessitates a shift towards electric transportation. The Inflation Reduction Act spends $3 billion to electrify over 217,000 vehicles in the U.S. Postal Service, $3 billion to clean air pollution near ports, $2 billion to assist automakers in electric vehicle production, and $1 billion to electrify school buses and garbage trucks. The act also offers $20 billion in loans for building electric vehicle manufacturing facilities.

Earth’s natural resources – from forests to coastlines – are some of the best methods of capturing carbon and addressing the climate crisis. In an effort to protect these resources, the Inflation Reduction Act authorizes $50 million in protecting forests, $250 million in defending endangered species, and $2.6 billion in improving coastal resilience. Additionally, the act invests $20 billion in supporting the research and development of sustainable agricultural practices that will enable the continuation of farming while protecting the land.

The U.S. government first formally recognized environmental justice in the 1990s with the establishment of environmental justice offices in the Department of Justice and EPA, yet it has continued to be an uphill battle for environmental justice to receive significant attention in the U.S. policy space. The Inflation Reduction Act takes important steps to reverse environmental injustices which pose disproportionate harm to certain color and low-income communities. The act funds $315.5 million for air monitoring systems in communities near high-polluting facilities and $3 billion for projects to address pollution in affected communities. The act also brings back the Superfund Tax, which imposes tax on companies for using or selling chemical substances. This tax is then directed to funding chemical cleanups.

Shortcomings of the Inflation Reduction Act

Despite its many promising provisions, the Inflation Reduction Act is not without its shortcomings. The act opens portions of Alaska and the Gulf of Mexico for oil and gas development. Additionally, in exchange for Sen. Joe Manchin’s support for the act, Sen. Chuck Schumer agreed to support Manchin’s controversial permitting reform. This reform would speed up permitting for energy infrastructure projects, potentially making permitting easier for fossil fuel projects. Although there has been significant opposition to this permitting reform among Democrats, Sen. Manchin has expressed confidence that the reform will be included in an upcoming funding bill. It remains to be seen whether this reform will pass and what specific implications it may ultimately have.

In a year that has been defined by a frequently gridlocked Congress and controversial Supreme Court, the Inflation Reduction Act comes as a win for many Americans but not all. In fact, the act was far from a bipartisan win in Congress, receiving zero support from Republicans. The heavy politicization and polarization of climate issues raise warning bells for the future of climate legislation, especially if Democrats lose control of Congress and subsequently lose the ability to pass climate legislation without Republican support. With a continued lack of bipartisan climate action, any future U.S. climate legislation, if any at all, will be in the hands of whichever party has majority power – a frightening prospect as midterm elections loom close.