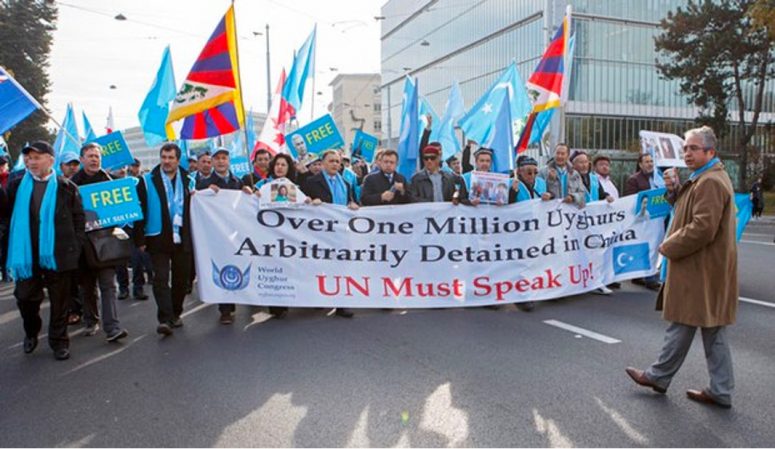 On Aug. 31, 2022, the Office of the United Nations High Commissioner for Human Rights (OHCHR) released the long awaited report cracking down on China’s human rights abuses of Uyghurs in Xinjiang. Nine months overdue and published mere minutes before High Commissioner Michelle Bachelet ended her term, the report made a lot of noise within the human rights community. The postponement occurred due to Bachelet’s decision to prioritize a visit to China and convey the allegations directly to their officials. While criticized for the decision, she has been applauded for the report despite it being published much later than officials had hoped.

A predominantly Muslim and Turkic-speaking ethnic group, eleven million Uyghurs currently live in the Xinjiang autonomous zone of China, one of the largest regions in China. With many calling for its independence, Xinjiang is also referred to as East Turkestan. Its border comprises one-fourth of the country’s total and is situated next to predominantly Muslim countries.

The targeting of Xinjiang Uyghurs largely started in 2014 with the creation of reeducation camps and mass detentions. In 2017, the region saw a $2.96 billion influx of government spending funneled towards security-related facilities. Additionally, that same year, an anti-extremist law was passed banning citizens from growing long beards, naming their children Islamic names, and wearing veils in accordance with the Chinese Communist Party’s (CCP) goals to sinicize religion. This crackdown on predominantly Muslim culture was labeled as a counter-extremism strategy to fight the East Turkestan Islamic Movement attacks through Vocational Educational and Training Centres (VETCs). The United States flagged the movement, but removed it off its list of terrorist organizations in 2020 due to unsubstantiated claims. Meanwhile, China continues to justify their actions by referencing the Global War on Terror initated by the United States which gained international momentum after the 9/11 terrorist attacks.

Organized into “cities” divided using a grid management system where captives are split into communities of 500 people, Uyghurs are subject to forced sterilization, sexual assault, rape, sleep deprivation, forced factory work, and other grave human rights violations. The Xinjiang Police Files, created by German anthropologist Adrian Zenz, contain leaked information forwarded from the inside of internment camps. Zenz provided statistics demonstrating evidence of the Uyghur community’s national population growth rate decreasing by 84% from 2015 to 2018. Also, camps store biometric data under the guise of a program called “Physicals for All” which is used to further monitor the Uyghur population through the collection of information from DNA samples and blood types to fingerprint and iris scans. The facts demonstrate that Uyghurs have been detained due to actions that mark them as suspicious to the CCP. This includes traveling to “sensitive” countries, attending mosque services, having three or more children, sending texts with Quran verses, practicing Islam, and more.

The OHCHR’s report itself included extensive interviews of first-hand witnesses with statements from twenty-six Xinjiang Uyghurs who have been detainees since 2016. The report focused on countering China’s claim that the VETCs are a counterterrorism measure. The outlined human rights concerns fall into the broad categories of religious and cultural freedom, right to privacy, reproductive rights, labor rights, family separation, and intimidation.

The end of the report calls for the prompt release of detained individuals, clarification to families on the whereabouts of their captured family members, review of the governing framework of national security, counter-terrorism and minority rights, ensurance that surveillance is only being used for national security purposes, and the ratification of the International Covenant on Civil and Political Rights from the Chinese Government. Addressing the business community, it calls for strengthening human rights risk assessments by companies involved in security and surveillance, refraining from sending individuals at risk of refoulement, and providing humanitarian assistance.

The report left Beijing officials angry, with Ambassador Chen Xu describing the report as “illegal and invalid” to journalists. Liu Yuyin, a spokesperson for the Chinese mission to Geneva, called it a “farce” created to discredit China. In response to the report, the Chinese government released a publication titled “Fight Against Terrorism and Extremism in Xinjiang: Truth and Facts” to discredit the UN and further promote the false premise under which the government is detaining Uyghur citizens. Chinese officials have further countered by urging people to investigate violations by “the US and some other Western countries, both at home and abroad.”

While the UN has been criticized for lack of efficacy, this report has made a substantial stride towards justice for Uyghur detainees. Its publication has high potential for Uyghur campaigns to gain funding, credibility, and influence. For non-Chinese government officials, its publication may empower them to take a public stand which could lead to diplomatic action. Furthermore, Chinese officials may be pressured to shut down the camps due to the increasing international criticism for their human rights violations.