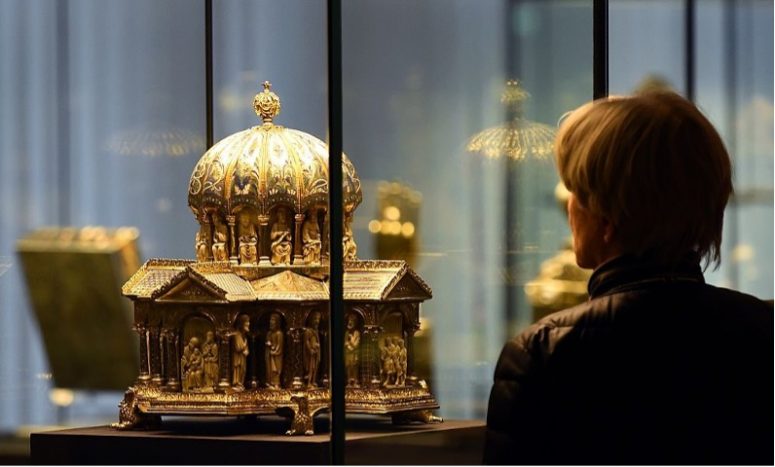 The Nazi Era was marked by genocide and the ravaging of the Jewish identity. Jews were robbed of most, if not all, of their belongings before being deported to their death in concentration camps. Any property left behind after deportation was inevitably collected by the Nazis, who ransacked Jewish homes, stealing jewelry, artwork, gold, and money, and even rummaged through corpses to collect dental work. The Nazis sent many of the most valuable pieces to Germany, never to be returned to their rightful owners.

Over the past several decades, many organizations and legislation — such as The Auschwitz Museum, The World Jewish Restitution Organization; The Conference on Jewish Material Claims Against Germany Claims Conference, founded in 1951; The Terezin Declaration passed during the 2009 Holocaust Era Assets Conference in Prague; and the Holocaust Era Asset Restitution Taskforce or Project HEART — have aided in the recovery of millions of valuable works of art that were seized by the Nazis, or sold to them under duress. The efforts are still ongoing, as evidenced by Federal Republic of Germany v. Philipp.

Federal Republic of Germany v. Philipp was brought to the U.S. District Court in 2015 by the heirs of a consortium of art dealers who purchased the Welfenschatz art collection at the end of the Weimar Republic. The heirs (respondents) allege that the Nazis, who rose to power thereafter, coerced the consortium members to sell the Welfenschatz to the Nazi party for a third of its value. After being denied compensation by the German courts, the heirs brought several common law property claims to the United States Federal District Court in Washington, D.C., seeking $250 million in compensation from Germany and the Stiftung Preussischer Kulturbesitz (SPK), an instrumentality of the Federal Republic of Germany.

The heirs brought the case to the United States, claiming that the unfair sale of the Welfenschatz fell within the Foreign Sovereign Immunities Act’s (FSIA) expropriation exception involving “property taken in violation of international law,” 28 U. S. C. §1605(a)(3). The heirs asserted that the sale of the Welfenschatz was an act of genocide in violation of international human rights law, and, therefore, the United States had jurisdiction to hear the case. Germany and the SPK moved to dismiss the claims, arguing that they were immune from suit because, according to the FSIA Domestic Takings Rule, a sovereign’s taking of its own nationals’ property is not unlawful under the international law of expropriation. The District Court denied Germany’s motion to dismiss, and the D. C. Circuit affirmed. The case was granted writ of certiorari to the U.S. Court of Appeals for the District of Columbia Circuit.  In September of 2019, Germany and SPK petitioned the Supreme Court of the United States for a writ of certiorari. The Supreme Court granted certiorari, vacated the D.C. Circuit’s judgment, and remanded the case to the district court.

Chief Justice John Roberts acknowledged that it was the job of the Court to determine whether it had jurisdiction over the heirs’ common law property claims by ascertaining if the sale of the consortium’s property was in violation of international expropriation law.  Chief Justice Roberts delivered the unanimous opinion of the Court, agreeing with Germany that the suit did not fall within the exception to the FSIA. He reasoned that in the FSIA, the Domestic Takings Rule stipulates that the taking of property violates international law only when a state takes a noncitizen’s property. As the consortium members were in fact citizens of Germany, the court found that there was no violation of international law. Roberts further reasons that contrary to the heirs claims, the FSIA expropriation exception does not extend international human rights law, which encompasses genocide.

Furthermore, the court’s decision in Philipp and the extraordinary weight it placed on nationality interferes with The Foreign Cultural Exchange Jurisdictional Immunity Clarification Act. The Clarification Act stated that the FSIA expropriation exception was inapplicable to artwork imported into the United States for temporary exhibition because it does not constitute “commercial activity.” While The Clarification Act does not directly apply to Philipp, as the Welfenschatz was not on temporary art exhibition, the Act demonstrates congressional support for the application of the expropriation exception to property takings regardless of the victim’s nationality. The Act stipulates that the expropriation exception is applicable when art was taken by representatives of Nazi Germany and when art was taken as part of “a systematic campaign of coercive confiscation or misappropriation of works from members of a targeted and vulnerable group.” The Act was, therefore, designed to permit descendants of European Jews, like the heirs in Philipp, to bring suit through the FSIA, regardless of their descendants’ citizenship. However, the decision in Philipp contradicts the Clarification Act by preventing descendants of German Jews from making claims to recover items stolen from them when they are in conflict with the Domestic Takings Rule.

Evidently, the Philipp decision has and may continue to pose vast challenges to many descendants of European Jews who seek to recover family possessions that were wrongfully taken from them by the Nazis.