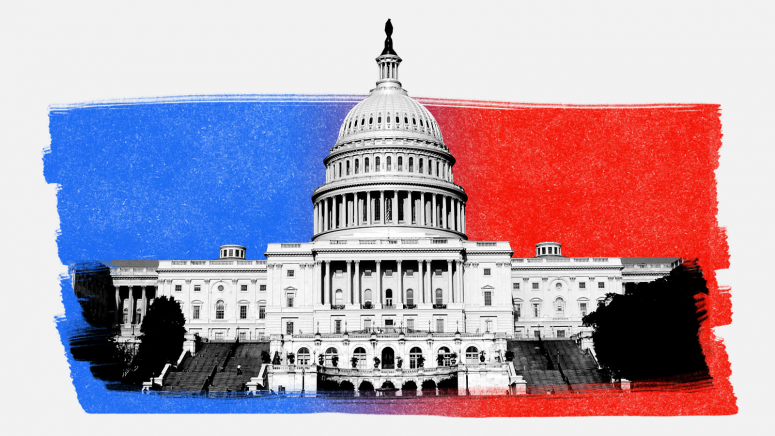 In January 2021, the Democratic Party assumed power in both houses of Congress and the White House with plans to pass landmark legislation on voting rights, climate change, and infrastructure. Just a year later, with the Build Back Better plan stalled and no viable path to passing voting rights reforms, the Democrats find their agenda sputtering and their momentum all but lost. Losses across the board in 2021 statewide races have led to many Democrats projecting large-scale defeat in the 2022 midterm elections.

After President Biden maintained an approval rating above 50% for the first several months of his presidency, his approval rating has sunk to 41% in recent polling. Along with  President Biden’s worsening approval, the Democratic Party has seen much of its gains following the 2021 election lost to the GOP. In a 14 point backslide, only 42% of Americans identify as Democrats with the GOP gaining considerable ground to a 47% identification among Americans.

With political winds turning against the Democrats, it appeared that 2021 statewide elections would be closer than expected. Despite lower expectations going into the off-year election cycle, key losses in Virginia, New York, and New Jersey surprised Democratic strategists. In Virginia, a state that has widely been viewed as a strong blue state, Republican Glenn Youngkin defeated former Governor Terry McAuliffe in the gubernatorial race, and Republicans won a majority in the House of Delegates. These results, which followed President Biden’s  10 point margin in the 2020 presidential election, offer concern about Democratic prospects in the imminent midterm cycle. In New York and New Jersey, Democrats suffered similar losses at the local level, while heavily-favored New Jersey Governor Phil Murphy eked out a re-election win against Republican Jack Ciattarelli. Amidst these ominous signs, Democrats are scrambling to find answers to their election woes.

Within the party, the blame game is in full swing. Many look to President Biden as the source of the party’s decline in popularity, citing a stalling agenda in Congress, rising inflation, and poor messaging. President Biden’s failure to deliver on his promise of enacting the most progressive agenda in American history has left Democratic candidates with a limited array of policy achievements to run on. But no election defeat that includes multiple states and a diverse range of voting demographics can be explained with a single cause. While political gridlock at the national level surely diminished the strength of Democrats across the board, local issues also played a key role in statewide elections. In Virginia specifically, issues like coronavirus restrictions and education played a major role in the gubernatorial election. Republicans in the state capitalized on a public that was exhausted from years of restrictions to successfully argue in favor of lessening covid restrictions while also convincing voters that Democrats sought to weaken the voices of parents in their children’s education. Furthermore, the candidates themselves often make or break an election run. In Virginia, it was easy for Republicans to frame former Governor Terry McAuliffe as an establishment politician while McAuliffe campaign’s tactic of framing Youngkin as a return to Trump-era policies failed to resonate in the same way that it did in 2020.

With so many faults from the national level to the local level, it is difficult to see a path forward that protects Democratic majorities in Congress. Yet, there are measures that can undoubtedly bring them closer to maintaining power. Most important of all of these is delivering on popular policy priorities like universal pre-K and expanded family leave. Not only do these policies resonate with Americans across the country, but they also have smoother paths to passage. Coupled with success in Congress, Democrats have to effectively communicate how successes at the national level improve the lives of the average American rather than letting the media frame the narrative as one in which politicians negotiate for months on an ill-explained policy. For individual candidates, the 2021 cycle made clear that a strategy of associating Republicans with Trump-era turmoil is ineffective and even harmful. Instead, a strategy that focuses on positive progressive successes that specifically benefit candidates’ constituents will lead to a more desirable outcome.

While some Democrats seem to have all but accepted defeat, a string of legislative wins, an improved economy, and a smarter campaign strategy can give the party a fighting chance in the 2022 midterm elections.