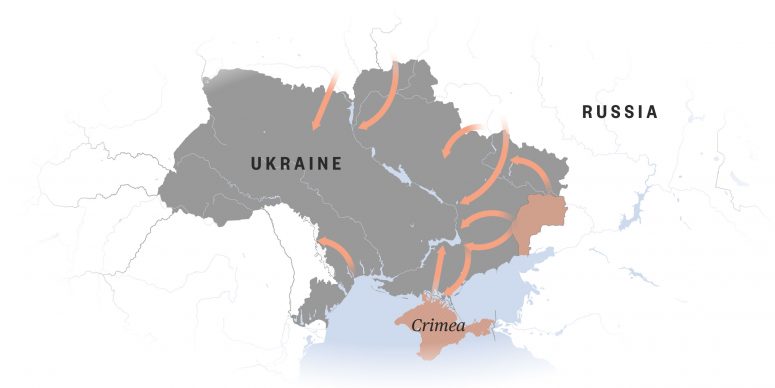 Global tensions, as well as oil prices, have soared to new heights following recent threats of a potential Russian invasion of Ukraine. While discussion surrounding the conflict has thus far been centered on implications to national security and foreign relations, the issue is also set to have major effects on climate change efforts that countries around the globe have been developing for years.

The histories of Russia and Ukraine are deeply intertwined, and conflict between the two countries has existed for generations, from Ukraine’s entrance into the Soviet Union in 1922 to its independence in 1991. Since 1991, Russia has persistently refused to acknowledge Ukraine’s independence, as demonstrated by Russia’s invasion and annexation of Crimea in 2014 and a series of Russian cyber attacks between 2016 and 2017. Russia also continues to maintain a military presence near Ukraine, currently stationing nearly 130,000 troops at the Ukrainian border. In December 2021, Russian President Vladimir Putin sent the United States a list of security demands with the most notable being that NATO exclude Ukraine from NATO membership. Barring Ukraine from NATO is critical for Russia as a NATO membership guarantees that Ukraine would be well-supported by other countries in the case of an invasion or attack. However, NATO quickly rejected this demand. The U.S. Secretary of State Antony Blinken declared, “I can’t be more clear — NATO’s door is open, remains open, and that is our commitment.”

Despite NATO’s ongoing commitment to reduce tensions and lead open dialogue with Russia, the risk of potential international conflict with Russia has driven a surge in oil prices over the past few days. Following a statement by U.S. National Security Advisor Jake Sullivan that the chances of a Russian invasion were mounting, oil prices reached a seven-year high of $94 per barrel. The climb in prices is only expected to continue; JP Morgan projects that prices could reach up to $120 per barrel if tensions persist.

Why does the Russo-Ukrainian Crisis so strongly dictate the trend of oil prices? Russia is the world’s second leading producer of oil and natural gas, so rising tensions put the stability of oil supplies at risk. Any type of invasion or battle between Russia and Ukraine could impair energy infrastructure that exists in the area. Additionally, countries within NATO could attempt to force Russia out of Ukraine using sanctions that limit Russia’s energy exports. In turn, Russia itself could try to pressure NATO into compliance by raising the costs of its energy exports. This is not an unprecedented tactic; Saudi Arabia implemented a similar strategy in 1973 against countries supporting Israel. However, it is unclear how likely such a move by Russia would be as it would not only harm countries receiving the exports but also Russia’s own oil and gas revenue. Global fears of oil shortage are thus warranted and have caused oil prices to skyrocket.

Beyond these more obvious political and economic implications of the Russo-Ukrainian crisis and the subsequent rise in oil prices, accelerating energy costs also jeopardize current international progress in terms of global warming. Countries are already struggling with limited oil and natural gas resources, and the global demand for coal has been on the rise, with a 6% increase of coal demand in 2021 alone. Spiking oil costs will only further incentivize the growth of coal-fired power generation which reached an all-time high last year. While new international commitments to phasing out coal — as laid out in the UN Glasgow Climate Pact — may help counteract this rise, environmentalists have already expressed skepticism over how strictly nations will enforce these agreements. Surging oil prices and coal demands might push countries to abandon their previous climate commitments.

Additionally, increasing oil prices has emboldened oil giants to pursue new, large drilling projects with potentially vast environmental damage. Exxon Mobil recently announced plans to increase projects up to 45% in 2022. These ambitious plans are made possible by the $23 billion in profits that the company brought in during 2021, which is their highest in seven years. At a time when the climate crisis demands a swift reduction in oil wells and drillings, new projects are a major step backwards. Climate activists have attempted to fight back by taking some oil giants like Exxon Mobil and Chevron to court over the years. However, even if the production of large oil companies was somehow reduced, rising oil costs and demands would only encourage other companies to fill the places of these oil giants. Surging oil costs create a vicious cycle that greatly hinders effective climate action.

Though the situation surrounding oil caused by the Russo-Ukrainian conflict looks bleak, there may be economic trends and behaviors that limit the potential environmental damage. High oil prices do lead to an immediate increased demand for oil, but they may eventually reduce demand as people are forced to shift their lifestyles to accommodate the high fluctuations and instability of oil. This kind of shift is already visible in the growing popularity of electric vehicles, which do not require gasoline. In 2021, Electric vehicles made up 20% of all new sales in Europe and 15% in China. The electric vehicle and green infrastructure industry show promising growth and may help limit the powers of the oil industry. Successful advancements in the green industry could alleviate some of the possible climate effects of the Russo-Ukrainian crisis and protect the climate from political and economic fluctuations.

The Russo-Ukrainian Crisis demonstrates how interconnected climate action is with political and economic affairs. Even the potential invasion of a single country can result in sweeping spillover effects on climate change. With the welfare of the entire planet at stake, the Russo-Ukrainian Crisis is a truly global issue that can affect all countries. As the climate crisis drags on, global issues will likely have to be addressed not only from a traditional political and economic standpoint but also from an environmental one.