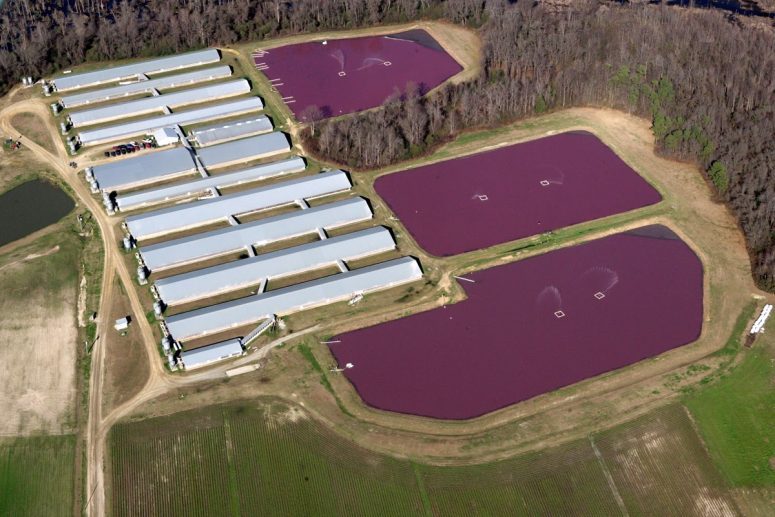 Murphy-Brown, a branch of the hog-production-industry superpower, Smithfield, was sued in 2014 by over 500 citizens in North Carolina for environmental damage, affecting community health and property enjoyment. These claims were condensed into 26 cases, the first five of which went to trial. Of those five, Murphy-Brown attempted to appeal one district court’s decision to a Fourth Circuit Court which rejected the appeal in November 2020.

The decision of the district court heavily stemmed from damages citizens suffered as a result of these hog farms processing pigs at a massive scale. The pigs were held in CAFOs (Concentrated Animal Feeding Operations), essentially metal warehouses where pigs risked suffocation due to the close proximity. Because workers were unable to clean fecal waste in such confined spaces, metal slats in the floor collected and ejected the waste into open-air lagoons. In this particular case, the hog farm produced 153,000 pounds of waste every day.

Due to the massive amount of fecal waste produced, the CAFOs became filled with a toxic gas, hydrogen sulfide. So, Murphy-Brown built fans, expelling the noxious fumes into the open air. The waste collected in the lagoons produced horrible odors and allowed for more fumes to settle. The damages caused by this waste mismanagement were twofold. First, there were negative effects on human health, which include, but are not limited to, increased child mortality, rates of cancer, depression, and antibiotic resistance. Second, the ability to enjoy property had been heavily diminished. The odor stemming from the lagoons and pig carcasses, which attracts flies all along neighbouring properties, and the noise of trucks arriving at all hours of the night, caused citizens to suffer on their own property. Despite all of these consequences, Murphy-Brown refused to comply with an agreement with North Carolina’s Attorney General to employ safer, healthier technologies.

Throughout the course of the trial, the primary arguments made on behalf of the community members suing Murphy-Brown were as follows: (1) Murphy-Brown actively regulated and instructed the hog farms on how to manage the fecal waste. (2) They did so, fully aware of the dangers that came with using fecal waste lagoons. (3) Murphy-Brown had access to safer technology but refused to implement it.

Another aspect to consider is the clear embodiment of environmental racism. These hog farms in North Carolina are concentrated near impoverished communities and the “Black Belt,” both of which consistently have higher rates of poverty and people of color. Consequently, all studies on the effects of hog farms on community health have concluded an array of disproportionate impacts on communities of color and poverty.

In the original case, juries empathized with community members, awarding $75,000 in compensatory damages per person, and a total of $5 million in punitive damages, which was reduced to $2.5 million due to North Carolina’s punitive damages cap.

Upon this verdict, Murphy-Brown filed an appeal for a new trial, arguing that while . Murphy-Brown did contract farms into processing hogs for them, the consequences of waste management was the fault of the farms and not of Murphy-Brown. Murphy-Brown also asked for a reevaluation of the final sum that Murphy-Brown would be required to pay.

Out of a 3 judge panel, 2 affirmed the district court’s decision, and 1 dissented in part. Judge Wilkinson gave an emotionally-charged concurring opinion, addressing the presence of environmental racism, saying:

“At the end of all this… lies an uncomfortable truth: these… conditions were unlikely to have… arisen at all had the neighbors of [the farm] been wealthier or more politically powerful.”

This case is significant because it is one of the first to address environmental racism. While further nuisance claims against Murphy-Brown are barred by current North Carolina law, this case allows for historically-oppressed communities to bring forth cases of disproportionate environmental impacts. This case also evaluated the current management in hog farms of North Carolina, swaying public opinion to move towards phasing out these hog lagoons, pushing for more legislation regulating the management of waste and quality of life for the pigs.