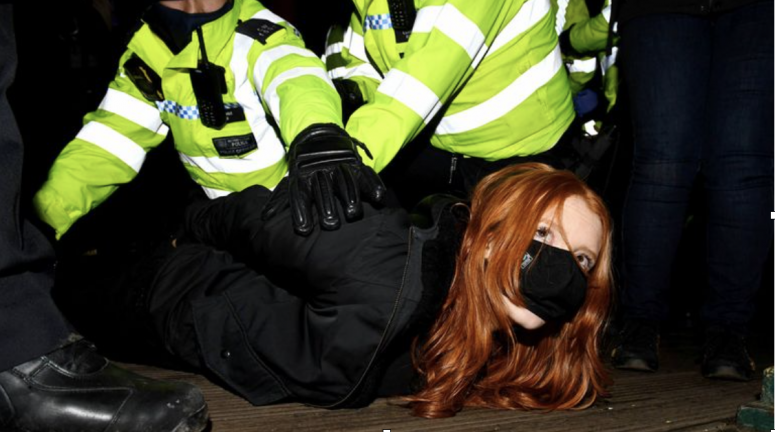 Just days after Sarah Everard’s body was discovered in the South East county of Kent, and as peaceful demonstrators in mourning endured disturbing heavy-handedness by the London Metropolitan Police, a new crime and policing bill – which threatens to “seriously curb the ability of citizens to protest” – overcame a key hurdle in the UK House of Commons. The Police, Crime, Sentencing and Courts Bill 2021 is an accumulation of proposed legislation which aims to reform the criminal justice system, crush the UK’s record of public dissidence, and support offender rehabilitation, among other things. Critically, though, proposed amendments to both the Public Order Act 1986 and the Police Reform and Social Responsibility Act 2011 would limit citizens’ rights to protest and grant police officers greater power to intervene by force. As Everard’s death at the hands of a London Metropolitan Police officer has heated discourse about the dangers, abuse and intimidation faced by women, several major news outlets have denounced the Conservatives’ new Bill as a display of not only tone deafness, but a blatant disregard for the right to protest. Amendments to the following legislation are among the most controversial components of the Bill:

Officially, the Public Order Act 1986 is enacted to “abolish the common law offences of riot, rout, unlawful assembly and affray and certain statutory offences relating to public order,” among other general assertions pertaining to public assembly, discrimination, and trespassing. Particularly in the past two years, however, an uptick in organized, often-boisterous demonstrations have led public officials to seek amendments to the Act that would “enable the police to deal better with protests in general.” London Metropolitan Police Commissioner Cressida Dick is among those who have sought such changes to the UK’s “very old” Public Order Act, saying that heightened powers for the police are necessary “to deal with protests where people are not primarily violent or seriously disorderly but… have an avowed intent to bring policing to its knees and the city to a halt.” Yet, as the public mourned Everard’s death at a South London vigil, the Metropolitan Police “clashed with some attendees,” seriously injuring several individuals and drawing widespread criticism accordingly. Irrespective of the government’s declaration that the vigil was “unlawful” given the UK’s coronavirus restrictions, many have noted that forcefully intervening in such a large anti-violence, anti-misogyny vigil-turned-rally is a demonstration of inexplicably poor judgement by the Met Police – which is made severely worse by virtue of Everard’s killer being a [former] standing Met Police officer. One key proposed amendment to the 1986 Act stipulates that it would become a crime to “fail to follow restrictions [that] protesters ‘ought’ to have known about, even if they have not received a direct order from an officer.”  The Shadow Justice Secretary, David Lammy, is among the Bill’s most fierce critics, stating that these amendments to public order legislation are “poorly thought-out measures to impose disproportionate controls on free expression and the right to protest.”

The administration and governance of police forces is outlined under the Police Reform and Social Responsibility Act 2011, which also makes provisions about the possession of illicit paraphernalia and “the prohibition of certain activities in Parliament Square,” among other things. Proposed amendments to the Act relate to access and behavior around the Parliamentary Estate. Specifically, Clause 57 of the Police, Crime, Sentencing and Courts Bill 2021 revises Part 3 of the 2011 Act, granting a police officer the power to “direct an individual to cease, or not start obstructing” passages surrounding the Estate. Moreover, the amendments would expand the “Palace of Westminster controlled area” to be inclusive of all entrances and exits. These changes, at first, seem purely practical and hardly sources of contention. Yet, with acknowledgement of the national significance of Parliament Square as a forum for public opinion and expression, it is perhaps more accurate that these amendments seek to limit the right to protest. In the past year alone, the square has been the gathering place of momentous social movements and campaigners, including Extinction Rebellion, Black Lives Matter and Sarah Everard protestors and activists. A recent editorial by The Guardian echoes the sentiment of countless political figures and media pundits this past week, saying that “a partisan systematic reduction in civil liberties is a very dangerous thing for a democracy.” Although the Bill is yet to be ratified, the Met Police’s clashes with civilians at Everard’s Clapham Common vigil ensued, and has prompted London Mayor Sadiq Khan to call for an independent investigation into the incident.

This report merely addresses the Police, Crime, Sentencing and Courts Bill 2021 as it pertains to freedom of assembly and the right to protest – which are prescribed in the Universal Declaration of Human Rights – and does not acknowledge the multiplicity of merits prescribed in this newly-proposed legislation. For one, the Bill targets the UK’s horrifically low rape prosecution rate and proposes longer sentences for convicted offenders of rape and sexual assault. It also seeks to “improve the efficiency of the court and tribunal system” through the modernization of court processes.  Nevertheless, the Bill, if passed, would “render the UK an outlier when it comes to international rights norms around the right to peacefully protest.” Accordingly, Parliament’s recent actions to swiftly push through the Bill “on an expedited timetable in the middle of a pandemic” is widely condemned and certainly undermines multiple core principles of democracy. Having cleared its second reading in Parliament last week, it appears likely that the Bill – perhaps with minor amendments – will inevitably be passed into law.