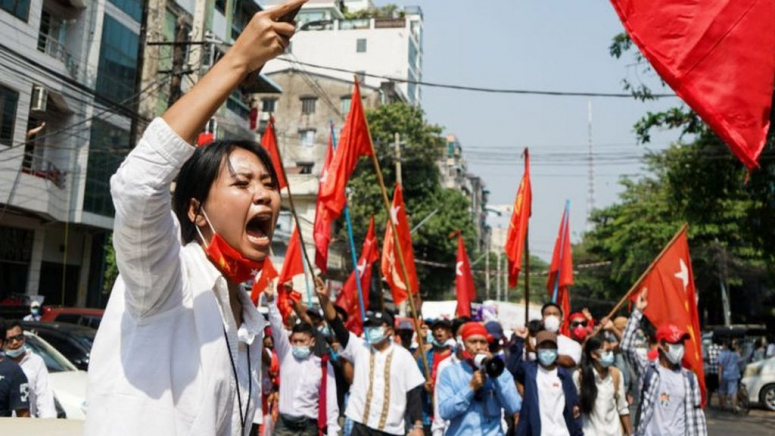 In a stunning setback for Myanmar’s young democratic government and to the chagrin of international democracies, the country’s military performed a successful coup d’état on February 1, 2021. The de facto leader of Myanmar Aung San Suu Kyi and several members of her National League for Democracy Party were detained by the military, as the military’s top general Min Hlaing Aung then took over Kyi’s post. In response to the overthrow of a government with strong approval from the people, enraged protestors have flooded the streets of Yangon—Myanmar’s largest city—and various other major cities throughout the country. Suu Kyi’s NLD Party won 83% of the vote in a landslide election; however, the military claims that the election was tainted by voter fraud. Military officials took the dramatic step of a coup, therefore, out of a supposed concern for the integrity of the election. Although the country is racked with fury that the leaders they chose will no longer be representing them, there is also a widespread concern that the military will usher in another authoritarian dark age unseen since the country broke free from military tyranny in the late 2000s, as the de facto leader has begun a push towards undemocratic measures in the realm of cyberspace. After a temporary internet shutdown that hearkened to memories of the military regime that preceded Suu Kyi and a new law proposal that would curb the freedom of the internet, the future of a democratic Myanmar appears far in the horizon.

The military claims that their usurpation of power is in the best interest of the Burmese people because they are responding to allegations of mass voter fraud, although there is little evidence to support their claim. The military junta’s officials cited roughly 10.5 million instances of irregularities during the voting process last year. While the country’s electoral process has some weaknesses with official voting roles and registration, evidence of widespread voter fraud has not come to the limelight. Additionally, several safeguards were in place to combat the potential for voter fraud. After voting, Myanmar citizens ink their fingers with a dye that stains the skin for about a week, making it unlikely that someone could vote at multiple polling places. Furthermore, observers from the U.S.-based Carter Center inspected the voting process to ensure there were no major irregularities. They found no issues.

The nature of the Myanmar coup was undemocratic in both its execution and its justification. As the coup was underway, the military shut down internet access for the country in order to eliminate public awareness. And on February 5, citing the circulation of what authorities deemed “fake news,” the military blocked access to social media platforms such as Twitter and Instagram before shutting down the internet for a second time on the next day. Cutting off Myanmar’s communication with the outside world, the military briefly restored the iron grip it had once had before the advent of Aung San Suu Kyi’s democratic movement just over a decade ago. As Myanmar’s military regime had once isolated its people and prevented communication with the outside world, the recent move to restrict the internet symbolizes a return to the country’s undemocratic past.

Myanmar’s military leaders are calling for the people to “join hands” with them as they purport to push for democracy even as officials have begun significantly reducing freedoms by strengthening their stranglehold of the internet. Especially worrying is the cybersecurity law that was proposed on February 12, which critics have claimed is aimed at reducing the flow of information within Myanmar from outside the country. The law criminalizes the spread of “misinformation” and “disinformation” that might cause instability in the country, and perpetrators can face up to 3 years in prison and/or a fine. The government also insists that Internet Service Providers store the personal data of users and make it available to the government. In an overtly undemocratic move, authorities are intent on passing laws that ensure that language they dislike is removed from cyberspace, political dissidents are thrown in jail, and the privacy of citizens is compromised. Soon after the coup, the regime attempted to appease the people with a seemingly good-hearted gesture as they released thousands of prisoners on the Union Day holiday, but its actions are more telling than their tone; those prisons are poised to be filled up quickly with dissidents if the coup is allowed to move forward with its oppressive policies.

Out of fear for a return to the authoritarianism of yesterday, the citizens of Myanmar and liberal democracies throughout the world are taking action against the perpetrators of the coup d’état. In a repudiation of the new government, citizens are engaging in mass protests daily in major cities despite the ban of gatherings of more than 5 people due to Covid-19 concerns. Protesters even demonstrated outside the Chinese embassy in Yangon out of outrage for China’s muted stance in condemning the coup. The United States, however, has already announced plans to take swift action against officials such as Min Aung Hlaing, who took the helm from Suu Kyi, and his Deputy Soe Win, who will face sanctions by the Biden administration. Nongovernmental organizations and telecommunications companies within Myanmar have also shown a hesitance to embrace the coup. A group of 158 NGOs in Myanmar released a statement in protest of the proposed cybersecurity law, and Telenor, a prominent service provider in Myanmar, is urging the government to maintain an open internet. Telenor is a Norwegian company which has committed to addressing the law according to its “legality, impact on human rights, necessity and transparency,” showing an unwillingness to cooperate with the new order if it attacks the rights of Myanmar’s people. Section 354 of Myanmar’s Constitution clearly indicates that every citizen is entitled  to “express and publish freely their convictions and opinions” yet only weeks into the new regime we are already seeing the junta crack down on speech through their proposed cybersecurity law. Myanmar has suffered under military rule, and its trend towards democracy in the 21st century has inspired hope for a better future. As the country’s progress is threatened, the world is collaborating to denounce and combat the unlawful takeover.