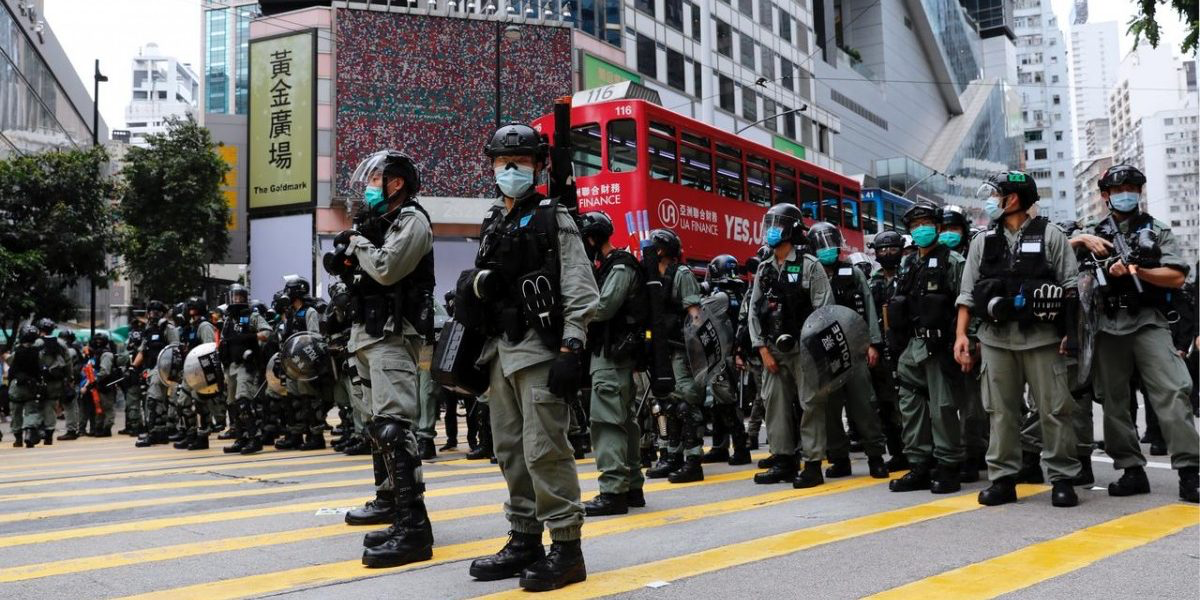 Since China first hoisted its flag on the soil of Hong Kong in 1997, the former British colony has suffered a downward spiral away from autonomy; its citizens have been stripped of democratic rights and found themselves increasingly subject to the whims of the authoritarian mainland government. Prominent among a recent string of Beijing’s power displays was the mass arrest of 53 people by the Hong Kong police on January 6, 2021, an action taken under the authority of a relatively new national security law—officially named the Law of the People’s Republic of China on Safeguarding National Security in the Hong Kong Special Administrative Region—that the Chinese government enacted last June. Police notably cited this controversial law last December when they charged the Hong Kong media tycoon Jimmy Lai with “colluding with foreign forces and endangering national security.” The foreign ministers of the United States, Canada, the UK, and Australia, issued a join statement in a forceful condemnation of the arrests and of the law that served as their legal basis, stating that “it is clear that the National Security Law is being used to eliminate dissent and opposing political views.” The law and recent actions taken under its authority have instilled a profound fear among democratic countries and the people of Hong Kong that the city’s purportedly separate government is rapidly being subsumed under Chinese hegemony. Although Chinese officials claim that the law was justified and, in fact, long overdue—the Sino-British Joint Declaration in 1997 did include a provision for a Basic Law which required Hong Kong to pass a national security law—democratic activists in Hong Kong and observers throughout the world believe China has egregiously violated the rights of the city’s citizenry in a blatant betrayal of both the text and spirit of the 1997 accord.

The Sino-British agreement formally ended British control over Hong Kong, a process over a century in the making. Britain first assumed control of Hong Kong during the First Opium War in 1842, and in 1898, after decades of dispute, China agreed to lease the island and neighboring vicinities to the UK for 99 years. The peaceful transfer of the territory in 1997 was an especially extraordinary feat  because China had become a communist nation even as Hong Kong developed into a global capitalist hub. Because these two ways of life contrasted so sharply, thorough preparations were necessary to ease the transition. Britain and China agreed to various provisions for preserving the democratic way of life Hong Kong had enjoyed under British rule, an arrangement which established the framework for what became widely referred to as the “one country, two systems” policy. Crucially, Article III Section 5 of the Sino-British agreement states that “rights and freedoms, including those of the person, of speech, of the press, of assembly…” and various other fundamental democratic rights “will be ensured by law in the Hong Kong Special Administrative Region,” and these rights were guaranteed for 50 years after the agreement’s ratification. In spite of this unambiguous commitment to preserve the rights of Hong Kong, China has strayed from these lofty democratic ideals in recent years.

In 2017, Chinese Foreign Minister Lu Kang declared that the Sino-British Joint Declaration “no longer has any practical significance, and it is not at all binding for the central government’s management over Hong Kong,” a claim thoroughly rejected by British authorities. True to its word, the Chinese government began taking steps in authoritarian directions; Chinese authorities expelled several U.S. journalists, arrested booksellers, and disqualified pro-democracy politicians in Hong Kong. The tension in the city reached a boiling point when speculation appeared in 2019 that China was preparing to impose an extradition law that would allow China to try Hong Kong citizens in the mainland’s court system. This extradition law would deny them the benefit of Hong Kong’s independent judiciary that is widely regarded as one of the few remaining bulwarks of the city’s crippled democratic foundation. Many months of violent protests racked the city from June to September, when China finally abandoned its plans for extradition.

The major clashes between police and protesters as well as the damage caused to the city’s infrastructure did not fade from Beijing’s memory once the demonstrations had concluded, and it prompted them to revisit the provision of the Basic Law that had long been ignored, requiring Hong Kong to implement a national security law. For years the city had dragged its feet on implementing such a measure, as it was deeply unpopular among citizens. China saw an opening and took it—the security law imposed by Beijing dramatically curtailed Hong Kong’s already dwindling freedom. The law outlines offenses such as secession, subversion, terrorism, and collusion with foreign forces. Although punishing these crimes seems uncontroversial on the surface, the details paint a frightening portrait. The parameters of the crimes as defined within the context of the law are extremely broad. For example, damaging public transportation can now be considered an act of “terrorism” according to the national security law, a charge that can prompt a trial in the rather illiberal mainland court system and carry a sentence of up to life in prison. Furthermore, Beijing will open security offices in Hong Kong, establish its own national security commission, and grant Hong Kong’s chief executive—a Chinese ally—the ability to appoint judges for national security cases. This law appears designed to circumvent Hong Kong’s independent judiciary, in addition to various other subversions of the city’s democratic institutions. Furthermore, Beijing’s assault on Hong Kong’s court system seems contradictory to Article III Section 3 of the Joint Declaration, which grants “independent judicial power, including that of final adjudication,” to the territory.

However heinous, China has the authority to pass certain laws and impose them on Hong Kong because of the Annex III provision in the Basic Law. However, the aggressively anti-democratic nature of the National Security Law has drawn severe criticism and already stirred controversy over its applications. While prominent figures such as Lai have faced charges for violating the new law, the wave of arrests in January included several minor offenders, signaling China’s increasing desire to crack down on dissent of various natures. Some consider Beijing’s bold actions a test for President Joe Biden, who has pledged to push back against China’s economic policies and their abysmal human rights record. The anti-democratic arrests in Hong Kong appear to be a strong-armed affront to the United States in more ways than one. The U.S. has an interest in preserving democracy throughout the world, making Hong Kong a natural ally. Additionally, an American citizen was among those arrested on January 6, adding further tension to the increasingly hostile atmosphere between the global rivals. President Biden and his Secretary of State Antony Blinken have both promised to uphold a tough stance against China in response to these arrests, suggesting that the bitter relationship between the adversaries will not soften in the near future. Hong Kong’s fragile democracy seems to be fading in the face of aggressive moves by Xi Jinping’s government. China appears unwilling to abide by the 1997 agreement and enthusiastic about imposing their will on the people of Hong Kong. The city is losing its freedom, and it is terrified.