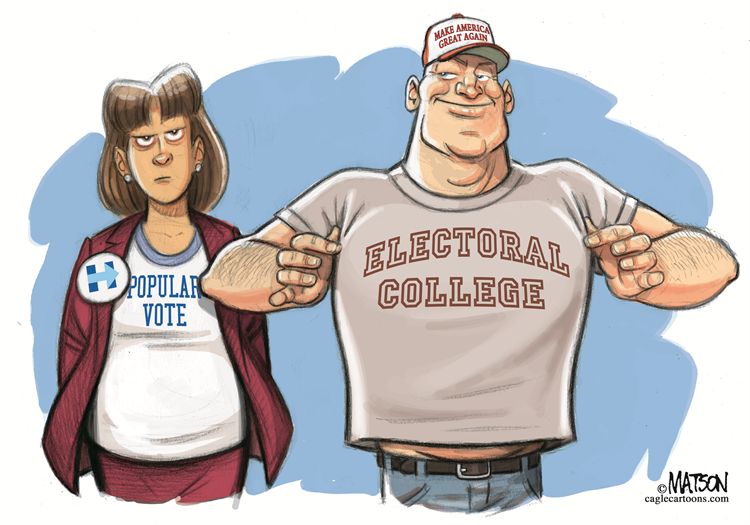 The Founding Fathers’ establishment of the Electoral College was an apprehensive, controversial compromise. The men sought to create a body of temporary representatives, individually appointed by the states, who would cast ballots in a presidential election for the winner of the popular vote. Though the body’s intended duty was to systematically honor the wishes of the people, the rise of a highly partisan party system has rendered this a flawed project. In a total of five elections throughout history — twice within the last five elections — the winner of the popular vote was not elected to the presidency. Many states have since taken measures to undermine “faithless electors” by enforcing electors to pledge support to the winning popular vote candidate and by sanctioning those electors who defy their pledge. The extent of state power to impose these sanctions is the issue of the Supreme Court case Chiafalo v. Washington. The court unanimously decided in July 2020 that states not only have the power to establish conditions of appointment to which electors must uphold, but also the power to punish the electors if they do not meet these conditions.

The presidential election of 2016 had the greatest number of “faithless electors” in history. After pledging their support to Hillary Clinton, seven appointed electors cast votes for Colin Powell in an attempt to prevent Donald Trump from obtaining a majority and, in turn, force the decision of the election onto the House of Representatives. Among these electors were the petitioners — Peter Chiafalo, Levi Guerra, and Esther John — who were Washington Democratic Party appointees and were fined $1,000 for breaking their pledge. The petitioners challenged their fines in the Washington Superior and Supreme Court, where their claims were rejected. When the US Court of Appeals for the Tenth Circuit decided a similar case — Baca v. Colorado Dept. of State — in favor of the petitioner, stating that the constitution grants electors the freedom to vote “with discretion,” the US Supreme Court granted writ of certiorari — a request to a lower court to send a case record for review — to resolve the split.

On July 6, 2020, the Court upheld the decision in Ray v. Blair — the states have the power to make pledge requirements to enforce that an elector supports their party’s nominee — and further established the states’ right to penalize electors who betray this pledge. In the 9-0 decision, Justice Kagan delivered the opinion of the Court, to which Justice Thomas filed a concurring opinion. Kagan stated that because of the “bareboned” nature of the Constitution with regard to the appointment of electors, the states essentially have free will over the appointment process, assuming the constitutionality of their actions. Her argument relies heavily on Article II and the The Twelfth Amendment. Kagan argues that in giving states the power to appoint and to attach conditions to those appointments, Article II grants states the power to impose sanctions. Furthermore, Justice Kagan claims that the Twelfth Amendment solely states that electors must vote by ballot, not “with discretion,” thereby rejecting the decision made in Baca v. Colorado Dept. of State.

Justice Thomas concurred in this opinion due to a diverging interpretation of the parameters of Article II. Thomas argues that the states’ control terminates when the appointment process is completed, and pledge laws are beyond this point. Thomas grounds his argument in the Tenth Amendment, arguing that because enforcement of pledge law is not an enumerated power, it is within the states’ discretion, “to the extent that the Constitution does not remove or restrict that power.” He maintains that because there is nothing in the Constitution that prevents states from exercising this power, the states are well within their jurisdiction.

The Supreme Court’s decision in Chiafalo v. Washington will undoubtedly have implications for both the states and Congress. Presently, only 15 states have provided some form of sanction to enforce their pledge laws – some impose $1,000 fines, while others remove the faithless electors from their positions. As we near the 2020 election, possibly one of the most contentious and fiercely partisan elections in history, the remaining states must bear the burden of choosing whether to construct an enforcement mechanism for electoral pledges or to pass the duty onto Congress. Though faithless electors have never succeeded in diverting a majority from a presidential candidate, due to the nature of the election and the limited number of states who have enforcement mechanisms in place, the electors have the potential to turn the tides of the election. However, with the Supreme Court’s decision, if more states implement pledge sanctions this situation becomes even less probable and feasible.

In a plausible reality where all states implement some form of sanction, another factor comes into play: the level of severity of the sanction. On the one hand, if the sanction does not render the elector’s vote void, it may deter, but not prevent, the elector from casting a faithless vote. The elector may subjectively decide whether their faithless vote is worth the sanction. On the other hand, if every state imposes a strict sanction that discards faithless votes, the very purpose of the Electoral College becomes unclear. There is little need for an intermediary body of electors who have no freedom to stray from the popular vote. As such, some have suggested the abolishment of the Electoral College. With less than a month left until the election, the potential electors must decide the role they intend to play while they still have a stake in the game.