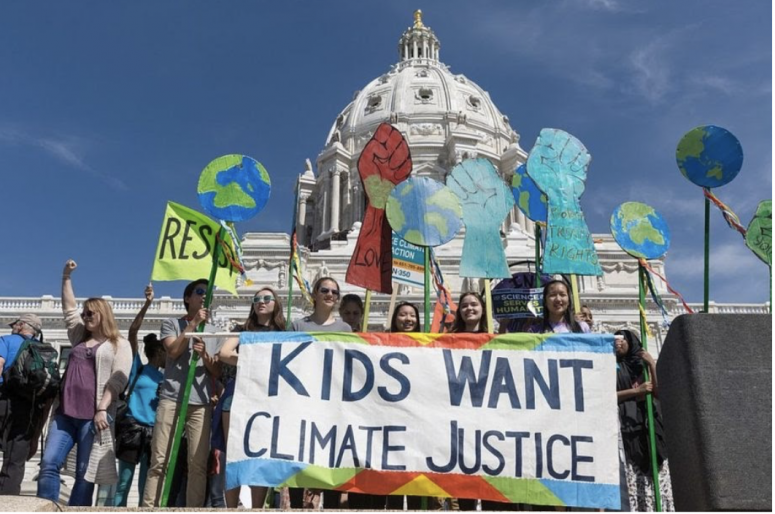 In 2015, 21 youth plaintiffs filed a lawsuit against the United States and several executive branch officers, including former President Obama and President Trump. The plaintiffs of the Juliana v. United States suit, who are all between the ages of 12 and 23, argued that government inaction in regards to climate change violated their “fundamental constitutional rights to freedom from deprivation of life, liberty, and property.” The plaintiffs were able to meet the requirements for standing with proof that they were adversely affected by the climate crisis. For instance, Levi Draheim, a 12-year-old plaintiff, had been injured by repeat evacuations during worsening storms. At the time, the Juliana suit was one of many climate change lawsuits making their way to the US court system. The youth lawsuit stood out because it challenged the federal government, rather than fossil fuel companies themselves.

As climate change remains a pressing issue, the Juliana v. United States verdict was seen as a disappointment for many. In a 2-1 ruling, a three-judge panel in the Ninth Circuit Court of Appeals dismissed the lawsuit. The plaintiffs had argued for a government plan to phase out fossil fuels and reduce greenhouse gas emissions, and had also asked the US district court of Oregon to order the federal government to implement a climate remediation plan that would target scientifically valid standards to stabilize the climate.

On January 17, the court concluded that they lacked the power to enforce climate policy decisions by the government and Congress and concluded that “any plan is only as good as the court’s power to enforce it.” The judges agreed that climate change was a threatening problem, but ultimately ruled that the plaintiffs did not have standing. The panel also concluded that climate policies had to come from the legislative branch. Judge Andrew Hurwitz wrote in his opinion: “Reluctantly, we conclude that such relief is beyond our constitutional power.” The appeals court decision reversed an earlier district court ruling that would have let the case go forward.

The majority of the panel sided with the Trump administration that the issues brought forth in the lawsuit did not belong before the courts. However, in a lengthy dissent, Judge Josephine Staton argued that courts do have the authority to protect the youth in the face of climate change, and criticized current government inaction. Staton wrote: “It is as if an asteroid were barreling toward Earth and the government decided to shut down our only defenses.”

In response to the ruling, the lead lawyer for the plaintiffs, Julia Olson, said that she would appeal, stating that the case was “far from over.” Olson, representing the group Our Children’s Trust, plans to send the case to the full Ninth Circuit for reconsideration.

Although the Juliana suit is the highest-profile case filed by Our Children’s Trust, the group has also filed similar climate change suits on behalf of youths in 9 state courts. The decisions are currently pending, proving that even though the Juliana ruling was a setback, climate activists are still undeterred from using the courts to fight inaction regarding climate change.

The Juliana ruling has implications for the ability of the court system to provide redress for constitutional violations. The court found sufficient injury among the plaintiffs, but differed on the court’s ability to provide a remedy. Olson and Our Children’s Trust plan to ask the Ninth Circuit for full review, which is rarely allowed. However, due to the urgency of the climate crisis, the Juliana plaintiffs may defy the odds and receive further review.

Regardless of the future review decision, climate change has become a prominent issue in the court system. On January 15, four Louisiana Indian American tribes submitted a formal complaint to the United Nations alleging that the US government had violated their rights by failing to take action on climate change. The tribes argued that rising sea levels and coastal erosion were drowning burial sites and threatening their source of food. The tribes held that intervention by the UN was necessary because the federal government had not done enough, with one plaintiff quoting: “If nothing is done, we fear the worst.”

Despite the outcome of the Juliana suit, climate change will continue to remain in court.

Dominique Karesh is a sophomore from Asheville, NC studying Public Policy and Statistics.