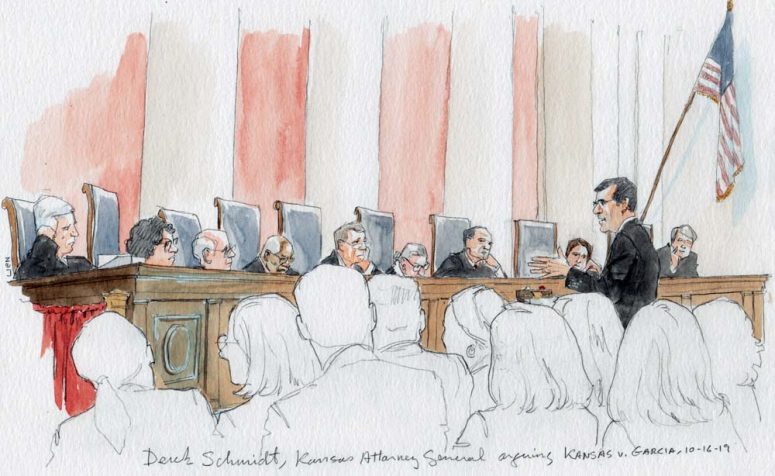 Kansas v. Garcia focuses on the arrests and subsequent convictions of three men in separate incidents. The eponymous defendant, Ramiro Garcia, who worked as a line cook in Olathe, Kansas, was stopped in 2012 for a simple speeding violation. Upon closer inspection, the police officer on duty discovered that authorities were already searching for Garcia; by seizing his federal employment document, the Employment Eligibility Verification, known colloquially as his I-9, detectives assessed that Garcia had falsified his social security number and charged him with identity theft. Garcia was initially found guilty in Johnson County, yet the Kansas Supreme Court overturned this ruling after appeal because of the fact that the I-9 is a federal document. In effect, the Kansas Supreme Court negated prosecutors’ ability to present federally mandated statutes as evidence of disobedience of state law.

The Supreme Court will thus answer whether states have the capacity to determine their own immigration policies. In terms of precedent, the Court has generally ruled that Washington’s decisions preempts state law. The government has enforced civic equality through Brown v. Board of Education (1954) and Loving v. Virginia (1967), choice through Roe v. Wade (1973) and Planned Parenthood v. Casey (1992), and interstate commerce through Gibbons v. Odgen (1824) and Wickard v. Filburn (1942). While this federalism is traditionally associated with big government and thereby progressivism, certain Supreme Court rulings have also benefited conservatives, as defined by the modern spatial model. Indeed, many decisions have in truth diminished the role of state government for the sake of liberty, especially as concerns free speech in Johnson v. Texas (1989) and firearm possession in District of Columbia v. Heller (2008). To this end, one cannot surmise whether federalism consistently aligns with one party’s views.

The most recent case regarding immigration may spell the outcome of this case. Arizona v. United States (2012) reflected a state bill which granted local law enforcement permission to apply federal immigration statutes. Furthermore, this Arizona measure attributed a misdemeanor, worthy of fines and potential forfeiture of business liberties, to anyone who hired or protected illegal immigrants. The Supreme Court, in a 5-3 decision, dictated that, because Congress has the responsibility to specify “a uniform rule of naturalization” across the country per the Constitution, Arizona has no right to determine the legality of its own residents.

Nevertheless, states’ rights advocates have three major factors in their favor in Kansas. Firstly, Justice Kennedy, who wrote the majority decision for Arizona, has since retired. Next, Justice Kagan recused herself in 2012 because of her former position as President Obama’s solicitor general and argued directly in front of the Supreme Court on other issues involving federalism. Finally, the two new justices fully embrace anti-federalism, albeit to differing degrees. Justice Gorsuch has defended states from intrusion repeatedly against unelected officials, particularly in the executive branch, and has not refrained from opposing justices generally recognized as conservative. In Sessions v. Dimaya (2018), for instance, which considered ambiguity in the United States Code, Gorsuch was the deciding vote in a 5-4 decision on the basis that Congress must write the explicit laws for the Code to legally be enforced. While Justice Kavanaugh has not spent as much time on the Court and thus does not have clear preferences, he is bound to support a smaller federal government more than Kennedy, who facilitated federalism as much as any conservative justice ostensibly could have, did.

Assuming Kagan again abstains, the Court will reach a 4-4 verdict, which will not alter the Kansas Supreme Court’s verdict. This outcome reflects Chief Justice Roberts’ hesitancy to overturn precedent, and he himself voted for Arizona in 2012. Even though an alternative result would seemingly favor anti-illegal immigration advocates, both major parties could utilize these newfound state rights’ to their advantage. In more conservative states, clearly, legislatures could make employment for illegal immigrants practically impossible, as they would have free rein to build prohibitive statutes. Nevertheless, California and other havens for illegal mmigrants could more fully accommodate the new residents, especially if President Trump wins a second term and concentrates more bluntly on illegal immigration. These Democrat-controlled states could ease educational access and extend Medicaid, TANF, and SNAP benefits for these families; in an extreme situation, these states would have the legal backing to eschew federal orders to construct new barriers alongside state properties. Additionally, Kansas will illustrate how this Court will rule in other issues regarding federalism, which is helpful when appraising the justices as a contingent.