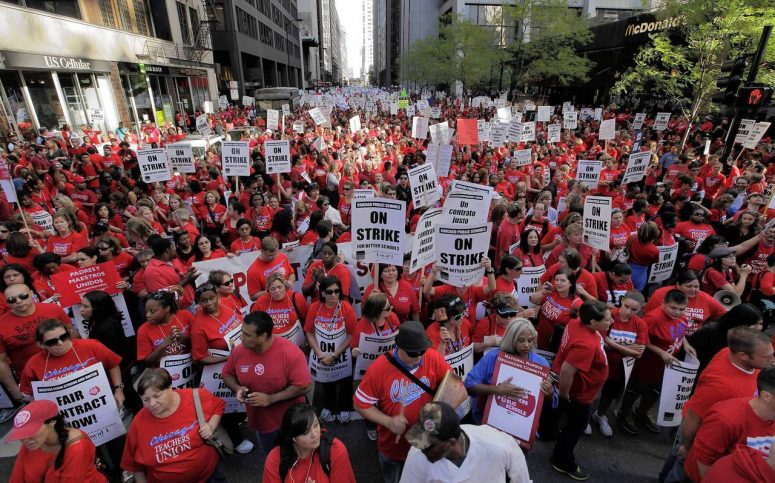 On Oct. 17, a Teacher’s Strike in Chicago erupted, keeping children and teachers out of the classroom for eleven days. The strike incurred after the Chicago Teachers’ Union and mayor Lori Lightfoot failed to reach an agreement for the new CBA. Ultimately, a compromise prompted the return to school, as union members were granted a raise, increased funding for sports and oversized classrooms, as well as five days to make up for the eleven days lost to the strike.

What Is a Teachers’ Strike?

A strike is defined as “an organized refusal to work by employees as a means of protest. . . It is a tactic that may be used during contract negotiations if employees and employers cannot agree on terms of employment.” Since strikes are currently illegal in the majority of American states, “walkouts” have become a common replacement. The two convey barely noticeable differences and accomplish effectively the same means.

At times, when negotiating a new contract with their school district, teachers’ unions are struck with complications pertaining to pay, class size, working conditions, and other relevant matters. These contracts, known as collective bargaining agreements (CBAs), normally hold for two to three year terms. At the end of a term, a new CBA must be decided upon between the district and the teachers’ union. During these negotiations, a teachers’ strike may, on rare occasion, occur due to the district’s failure to meet the needs of the union. Interestingly, of all of the 50 states, teachers’ unions are most common in Pennsylvania, Washington, California, and, most relevant to this case, Illinois.

Why Was There A Teachers’ Strike?

A pay raise would considerably benefit public school teachers all throughout America. Teachers often believe they are not properly rewarded for their work in educating the future leaders of our country. With the most recent strike, however, teachers throughout Chicago were determined to achieve “more than a pay raise.” The strike was one of the longest in Chicago in decades and took place in the third-largest school district in the United States. On Oct. 17, 25,000 members of the Chicago Teachers Union failed to show up for work in efforts to transform the Chicago education system, which already struggled from a troubled, finance system. A clash between the recently elected Chicago mayor, Lori Lightfoot, and the Chicago Teachers Union incurred after the two had failed to come to an agreement on the terms of the new CBA. The disagreements were predominantly over staffing and class sizes, though various other issues were on the table, such as pay and contract duration. Lightfoot campaigned as a progressive, stressing the need for school reform, yet the Chicago Teachers’ Union “accused her of failing to follow through on campaign promises.”

While schools remained open despite the lack of unionized teachers, the effects of the strike were not only limited to the teachers, but also took a toll on students and parents. CBS News quoted Dominique Dukes, a Chicago mother of two young children: “It is over finally, thank God. . . they did miss out on their education. It was the worst experience ever.” The strike also affected athletics, as one school’s soccer team was unable to defend its state championship title since the state tournament took place in the midst of the strike. Ultimately, while educators all throughout Chicago may have deemed the walkout necessary action to achieve change, rippling  effects on the students and their families could certainly be felt.

How Did The Strike Play Out in Chicago?

On Oct 31, the 11-day walkout of more than 300,000 public schools in Chicago finally came to an end. A compromise between Mayor Lightfoot and the Chicago Teachers Union allowed students and teachers to return to school the following day. In what the mayor called “the most generous contract in CPS history,” the agreement sparked controversy among the Chicago Teachers Union. Many union members were disappointed in the way the strike ended, such as being granted only 5 days to make up for the 11-day strike. The Union was determined to grant Chicago teachers all of the days lost due to the strike, but a compromise with Lightfoot resulted in a mere 5 days back. Others, however, were simply glad that their voices had been heard and they could finally be out of the cold and back in the classroom. Ultimately, Lightfoot and the Union decided that schools would receive “class size caps and a nurse and social worker in every school.” The agreement constituted “$35 million annually to reduce oversized K-12 classrooms, with a priority on schools with ‘the most vulnerable students,’” as well as “a 33% increase in annual funding for the district’s sports committee.”

Additionally, the Chicago Teachers Union strike in  Chicago led to a series of teacher walkouts in states and cities  such as West Virginia, Oklahoma, Los Angeles, and Denver. Randi Weingarten, the President of the American Federation of Teachers says that the strike “wasn’t an isolated moment. This is now a strategy.” Not only did the Chicago teachers’ strike directly set the stage for a series of strikes outside of Chicago, but it also marked the beginning of a movement for teachers all throughout America. Walkouts may possibly become a norm, as the widespread consequences of a refusal to work forces policymakers to listen to the demands of teachers, and other employees, across the U.S.

Allison Kunstler is a Sophomore from Long Island, New York studying Public Policy with a minor in Global Health.