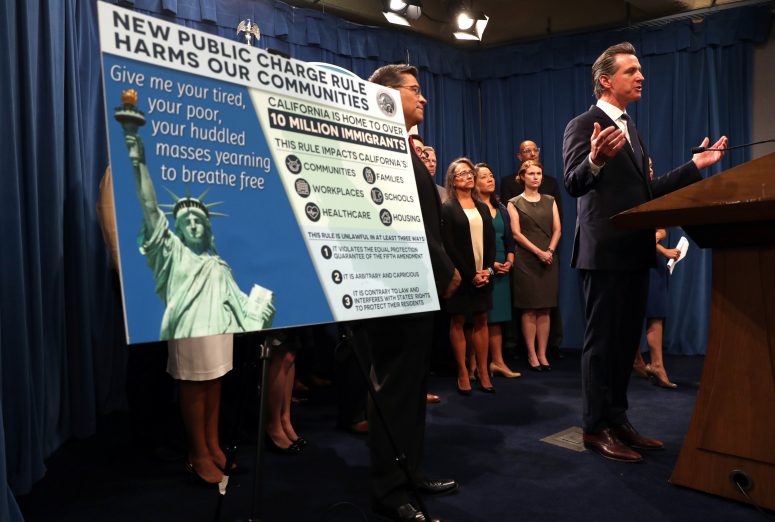 A nationwide injunction has been issued against the Trump Administration’s new “public charge” rule, which attempts to link immigration status to individual income and usage of public welfare programs. While the actual number of immigrants affected by the Department of Homeland Security’s enforcement of these rules is relatively restricted and the policy is currently on hold, the damage has already been done. Large numbers of immigrants have already unenrolled from welfare programs out of fear and confusion.

First introduced in the Immigration Act of 1882, the term “public charge” has been used to refer to prospective immigrants that are unable to take care of themselves due to poverty or disabilities. Being classified as a “public charge” constituted grounds for denial of legal entry or citizenship because the potential immigrant was viewed as far too dependent on the U.S. government.

Although a seemingly restrictive rule, few immigrants have been turned away on these grounds since the 1940s. In fact, in 1999, the Clinton Administration  redefined the term “public charge” to only include immigrants receiving public cash assistance or long-term, institutional care at the government’s expense. For the last twenty years, interpretation of “public charge” has remained consistent with the Clinton Administration’s proposal and rarely has been used to deny citizenship.

However, with little legal or historical precedent, the Department of Homeland Security under President Trump has repeatedly attempted to generalize the socioeconomic factors that classify someone as a “public charge.” In fact, under the “public charge” rule, the Trump Administration wants to give individual, low-level officials at the U.S. Citizenship and Immigration Services and U.S. Customs and Border Protection the discretionary, vetting power. This would allow these officials to determine who is legally allowed to enter and remain in the United States, using an ambiguous 183-page regulation.

At its core, the DHS’s new rule would consider usage of food stamps, Medicaid, or housing subsidies for a cumulative twelve months in any given three year period as  negative factors in determining whether or not someone would be considered a “public charge”. According to Acting Director of U.S. Citizenship and Immigration Services Ken Cuccinelli, a “public charge” inadmissibility determination would be the result of a “totality of circumstances.” The U.S. Citizenship and Immigration Services would also weigh other positive and negative factors listed in the rules, such as age and level of English proficiency. It is important to note that it does not  matter whether or not an immigrant is actively applying for and using certain public welfare programs, but whether or not they are simply eligible.

According to a 2018 November research brief by the Migration Policy Institute, approximately 69 percent of immigrants who received permanent residence over the last five years would have had a negative factor under the DHS’s proposed guidelines for “public charge”. The brief also emphasized that such a policy would disproportionately affect women, children, and the elderly; and shift away from Latin American immigrants in favor of European ones instead. The implementation of these “public charge” guidelines would greatly expand the number of green card applicants who could be rejected by the U.S. government for not being wealthy enough.

President Trump argues that this rule is a legal necessity because it ensures that only the financially self-sufficient become permanent residents of the U.S. and that public benefits are protected for American citizens.

However, there has been an intense backlash from critics against this new “public charge” rule. As of right now, New York, Washington, California, Maryland, and Illinois have blocked the rule from going into effect, and a nationwide injunction has been implemented as well.

Opponents of the new rule have not been quiet – they argue that the “public charge” rule actively discriminates against low income immigrants and immigrants of color, while favoring their wealthier European counterparts. Immigration advocacy groups claim that this new rule would discourage immigrants from seeking necessary assistance, including life-saving healthcare and nutrition.

New York Southern District Judge George B. Daniels believes that “this rule is simply a new agency policy of exclusion in the search of a justification.” California U.S. District Judge Phyllis Hamilton ruled that the Trump administration violated the Administrative Procedure Act, 79th Congress, 2 Session (June 11, 1946)  by “[acting] arbitrarily and capriciously during the legally-required process to implement the changes they propose.”did not conduct any sort of research into the magnitude of harm the new rule could cause. Washington U.S. District Judge Rosanna Malouf Peterson, issuer of the national injunction, ruled that the DHS had “not cited any statue, legislative history, or other resource that supports the [legal] interpretation that Congress has [given] to the DHS the authority to expand the definition of who is inadmissible as a public charge or to define what benefits undermine, rather than promote, the stated goal of achieving self-sufficiency.”

Although the DHS’s new rule is legally barred from being implemented (for the time being), the damage may have already been done. Fear and confusion over the actual guidelines and who would be affected have caused immigrants to unenroll already.

A 2019 Urban Institute study found that in a survey of 2,000 adults in immigrant families, 13.7 percent chose not to use non-cash benefits programs in 2018 due to reports about the potential rule.

According to a 2019 report by the Kaiser Family Foundation, the rule could potentially lead up to 4.7 million people withdrawing from Medicaid and the Children’s Health Insurance Program (CHIP), even though CHIP would not be classified as a negative factor under these guidelines.

Additionally, The Los Angeles Times reported that there have been instances of immigrants with children enrolled in special education programs withdrawing them from school, as well as refugees and asylum seekers removing themselves from food assistance programs.

Regardless of whether or not the DHS’s new “public charge” guidelines are approved, they have already had a chilling effect on immigrant and minority communities across the country. Ambiguous definitions,  lack of clarity, and unchecked rhetoric have caused American immigrants to sacrifice necessities of food, health, and housing, to stay in a country with growingly stringent rules on both legal and illegal immigration. If allowed to be implemented, these set of “public charge” rules will set a dangerous legal tone for the future—one that will prioritize financial privilege over that of equality under the law

Ellen Wang is a junior from Plano, Texas studying Political Science and Economics (Finance Concentration) and minoring in Biology.