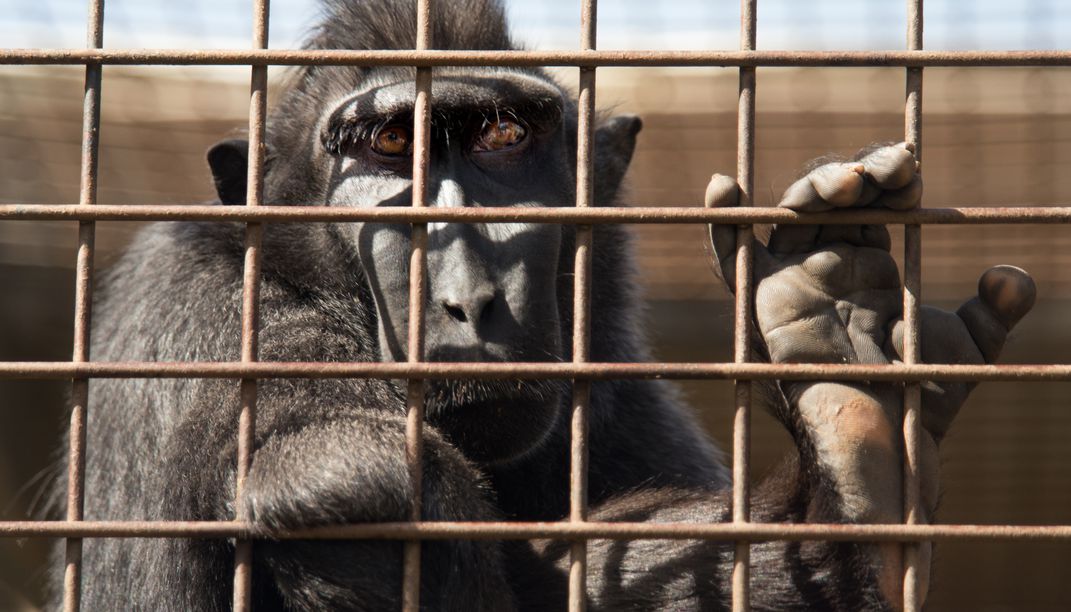 Habeas corpus, which directly translates to “that you have the body,” grants people the right to contest their unlawful detention in a court of law. While this concept has traditionally applied to human beings, recent debates have attempted to extend this right to animals ‘imprisoned’ at zoos, particularly those with proven advanced cognitive abilities.

The Beginning of the Debate: Tommy the Chimpanzee

Tommy was found by the Nonhuman Rights Project (NhRP) living alone in a cage in a trailer park along Route 30 in Gloversville, New York. He was raised by Dave Sabo, a chimpanzee breeder notorious for mistreating his chimpanzees. Chimpanzees’ natural habitat is in the rainforest, where they develop complex social organizations. However, in Tommy’s cramped quarters, the closest semblances to this environment were painted concrete walls and a television playing cartoons. Tommy remains there today, although his lawyers aim to relocate him to the Save the Chimps Sanctuary. He likely suffers conditions of solitary confinement, as chimpanzees possess a theory of mind resembling that of humans, in which they understand the past and anticipate the future. For these reasons, the NhRP filed a petition for a writ of habeas corpus on behalf of Tommy in the New York State Supreme Court, Fulton County in December of 2013. For the first time, legal rights were being demanded for a nonhuman animal. The Court was being forced to deliberate on a matter never raised before: if Tommy, a chimpanzee, has a right to bodily liberty.

Oral arguments for Tommy’s case were first heard in October 2014 in the Third Judicial Department of the New York State Supreme Court. Steven M. Wise, founder and president of the NhRP, intended to convince the Court that Tommy was “detained against his will because no chimpanzee… would possibly wish to live in the conditions in which he is living.” Furthermore, the NhRP sought to prove that Tommy is a legal person and keeping him in solitary confinement is grounds for unlawful detention. In a controversial argument, Wise compared Tommy’s case to that of Lemmon v. People, in which young slave children who fled to northern states were freed and relocated to the custody of a better caretaker under habeas corpus. Wise argued that 26-year-old Tommy possessed cognitive abilities comparable to those of a human child and should thus be relocated to a sanctuary. Ultimately, the Third Judicial Department ruled that Tommy “is not a ‘person’ entitled to the rights and protections afforded by the writ of habeas corpus” because chimpanzees cannot “bear any legal duties, submit to societal responsibilities, or be held legally accountable for their actions.”

Following this decision, various amicus curiae briefs and expert affidavits were submitted in support of Tommy’s case. Lawrence H. Tribe, a Professor of Constitutional Law at Harvard Law School, submitted a compelling brief which argued that the Courts fundamentally misunderstood the purpose of the common law writ of habeas corpus and incorrectly defined legal personhood; if the Courts define personhood as the capacity to “bear rights and duties,” then “third-trimester fetuses, children, and comatose adults” are, too, denied personhood under that definition. Furthermore, renowned primatologist Jane Gooddall submitted an expert affidavit expressing that chimpanzees are indeed responsible for duties akin to those of humans. For example, adult male chimpanzees are responsible for patrolling their territory to protect their female and young. Despite these compelling narratives, the Court denied NhRP’s second habeas petition in December 2015.

Tommy’s case does not end there. In October 2016, the NhRP filed an appeal with the First Judicial Department following concerns that Tommy’s owners, the Laverys, relocated him beyond the jurisdiction of New York courts. A joint hearing was held March 2017 in Manhattan for Tommy and Kiko, another chimpanzee allegedly facing unlawful detention. In line with Tribe’s assertions, Wise argued that denying Tommy and Kiko bodily liberty on the grounds that they are incapable of bearing duties and responsibilities is not a legally acceptable reason, as it “[would deprive] millions of humans in New York the ability to go into court.” Under this definition of personhood, children, the elderly, and the disabled would be deprived of habeas corpus rights. In addition, Wise adopted Goodall’s assertions in arguing that chimpanzees can bear duties and responsibilities within their own communities.

Ultimately, the First Judicial Department ruled that the NhRP cannot seek second writs of habeas corpus for Tommy and Kiko. Following this decision, the NhRP appealed it to the Court of Appeals, but were denied their motion for permission to appeal by Judge Eugene M. Fahey. Judge Fahey admitted that he struggled with the decision and said that although a “chimpanzee is not a ‘person,’ there is no doubt that it is not merely a thing” and “ultimately, we will not be able to ignore it.”

For the NhRP, this decision signifies “progress in the fight for nonhuman rights,” and is currently deliberating its next steps for achieving habeas corpus rights for animals of ‘personhood’ like Tommy and Kiko.

The Debate Today: Happy the Elephant

Recently, the NhRP has been fighting on behalf of an elephant named Happy who has been in captivity for 42 years. Happy was moved to the Bronx Zoo after spending five years at a safari park in Florida. There, she has resided alone since the passing of her companion Grumpy in 2006. Her ‘habitat’ is a 1.15-acre yard and indoor stall with few attractions besides a small pond, green ball, and scattered shrubs and logs. Happy is the subject of a well-known cognition study in which she recognized herself in a mirror, proving that elephants are self-aware like humans, supporting the NhRP’s arguments.

In their natural habitats, elephants migrate great distances in search of fibrous food and sources of water. Contrastingly, Happy spends hours standing on concrete in cramped quarters and consuming calorie-rich foods, conditions which lead to being overweight, poor sleeping habits, behavioral tics, and abnormal gaits. Given the stark differences between Happy’s living conditions at the zoo and her natural habitat, and her astonishing level of self-awareness, the NhRP concluded that she is entitled to habeas corpus.

Happy’s case is currently being heard under Judge Alison Y. Tuitt at the New York State Supreme Court in Bronx County. Judge Tuitt granted Wise’s motion for admission to represent the NhRP in voicing Happy’s case to the Court. While the case was scheduled to be heard on Oct. 21, it has recently been adjourned. For the time being, the NhRP has succeeded in obtaining a restraining order on Happy that prevents the Bronx Zoo from relocating her, an action that would prevent the state from having jurisdiction over the matter.

Until the Courts reach a final decision, the meaning of personhood under the law remains widely debatable. Certainly, the NhRP and similar organizations will remain dedicated to pursuing justice under habeas corpus for ‘nonhuman humans.’