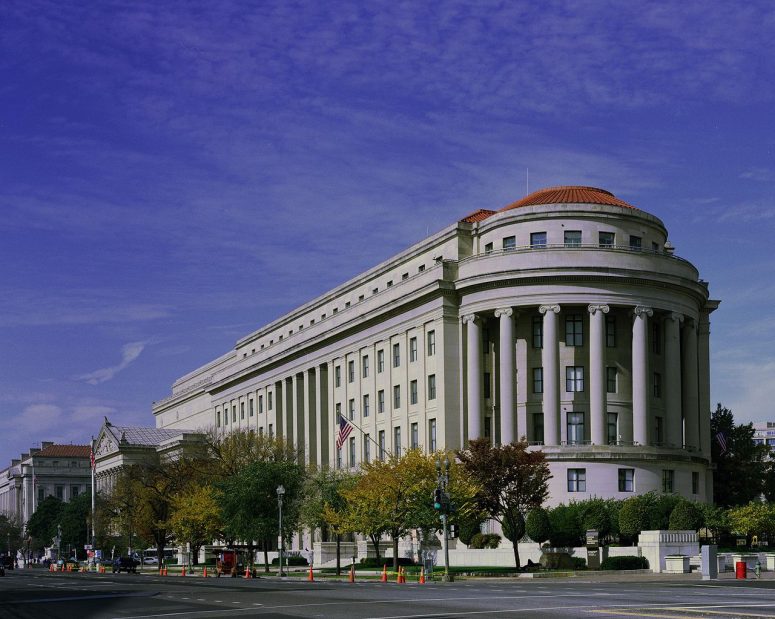 Summary: In the twenty-first century, amidst significant changes to the American and global economy, our century-old antitrust laws may be lacking the key protections needed to regulate the giants of today’s economy, despite their past successes in breaking up monopolies.

In response to the increasing power of the Standard Oil Company, who controlled the refining of more than 90 percent of oil in the United States by 1880, Ohio Senator John Sherman proposed the Sherman Antitrust Act to preserve “free and unfettered competition as the rule of trade” by breaking up monopolies. 128 years later, a new challenge is faced as courts must decide whether or not the technology magnates of the twenty-first century are in violation of existing antitrust protection.

In addition to the 1914 Sherman Antitrust Act, the Clayton and Federal Trade Commission Acts expanded protections against “conspiracy…in the restraint of trade” and “unfair methods of competition,” respectively.

Although the Sherman Act states that “every person who shall monopolize, or attempt to monopolize, or combine or conspire with any other person or persons, to monopolize any part of the trade or commerce among the several States, or with foreign nations, shall be deemed guilty of a felony,” the definition of what defines a monopoly (or an attempt to create one) is left to the courts to decide. What percentage of a market must be controlled by a company before it is considered to be a monopoly? If a monopoly reduces inefficiencies, which benefit consumers by lowering prices, is this monopoly actually harming consumers? And the question that may be more relevant than ever: what counts as an industry? Is online shopping a distinct industry from brick-and-mortar retail?

In the 1962 Supreme Court Case Brown Shoe Co. v. U.S., the third-largest and eighth-largest shoe retailers attempted to merge, however, the Court argued that doing so would violate the Clayton Act. The Supreme Court defined the shoe companies as partaking in not just one industry, but three: men’s, women’s, and children’s shoes. The District Court found that in the vast majority of cities, competition would decrease in the shoe industry. Interestingly, the precedent of past mergers influenced the court’s decision to side against the companies.

Despite the apparent loss that Brown Shoe seemed to offer to businesses, there remained a silver lining within the court’s analysis. Such mergers could benefit consumers as long as doing so would reduce inefficiencies in an economy of scale, making the industry more competitive and beneficial to consumers.

Twelve years later, Brown Shoe was essentially reversed in the 1974 case United States v. General Dynamics Corp. The attempted acquisition of United Electric Coal Companies by the eponymous General Dynamics Corporation had much in common with that attempted by Brown Shoe Co. Both were in industries that faced an increasingly small number of companies controlling an increasingly large share of the industry, and while this acquisition would enlarge the market share of General Dynamics, the court no longer assumed that this caused a decrease in competition. In fact, the court suggested, it may actually increase competition in the industry as United Electric, who focused on strip-mining, was facing dwindling reserves and a decline in their ability to rival the other coal companies in the surrounding areas.

However, as the economy underwent significant changes with the dawn of the internet and the growth of the technology sector, which often act in ways which traditional brick-and-mortar businesses do not, there is doubt in the ability of the nation’s antitrust laws to act when needed.  Perhaps the best example of the disconnect between the tech boom and politics is the appearance of Facebook CEO Mark Zuckerberg before three Senate committees, where Utah Senator Orrin Hatch failed to understand the company’s ad-based revenue model.  If the Legislative branch cannot grasp the fundamentals of the twenty-first-century economy, what chance does the more isolated Judiciary stand in analyzing the finer details of a merger between two multifaceted tech firms?

Two recent developments make antitrust cases more difficult to fully analyze in the modern age. The first is globalization and the multiple jurisdictions in which multinational corporations operate under.  Because the different jurisdictions may be affected differently by mergers—two companies that may be relatively small in most jurisdictions may have a very large share of a certain industry in a relatively small nation—there is room for some countries to engage in protectionism under the name of antitrust laws.  The second is the “better, faster, high-tech” development of the “New Economy,” where efficiency and competition can be difficult to measure.

Although there have been calls for a legal challenge to the increasingly monopolistic control of Amazon, existing laws do not provide significant legal standing for any large-scale challenge to the e-commerce giant.  Rather than using monopolistic practices to beat its competition, Amazon simply beats them with its size, selling massive quantities on razor-thin margins to outsell its competitors. Although this is obviously terrible for plurality in the industries in which Amazon operates, it has not harmed the consumer, at least not yet. However, Amazon’s actions have shown a methodical plan to achieve such a large market share that it can monopolistically manipulate its suppliers and that gives it an unfair advantage in a seemingly fair competition with other companies.

But for now, Amazon still stands. And it is hard to see Amazon being seriously challenged by American Antitrust Legislation without a significant reinterpretation of the Clayton Act by the Supreme Court. Although, in the past, economies of scale allowed for increasing competition, it is possible for companies to get so large that this advantage while benefiting the consumer by price, hurts them by restricting choice. And in the age in which data collection by companies such as Amazon, Facebook, and Google is more scrutinized—and more prevalent—than ever, the lack of choice over who collects our data, and what is collected, may prove to damage the consumer more than the extra money paid to keep the brick-and-mortar bookstore afloat amidst the low prices of Amazon and the rest.