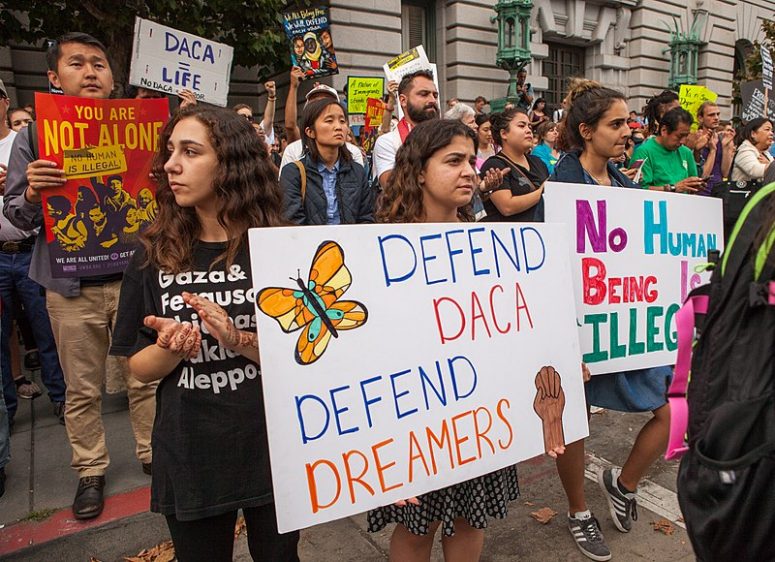 Summary: In 2017, the Acting Secretary of Homeland Security, Elaine Duke, issued a memorandum rescinding the memo that established DACA and setting forth a plan to phase it out. Recent rulings, however, have upheld the DACA program, creating legal barriers to the Trump Administration’s attempt to end it.

In 2012, the Obama Administration authored an Executive Branch Memorandum more commonly referred to as DACA, which stands for the Deferred Action for Childhood Arrivals. This memorandum was previously entitled “Exercising Prosecutorial Discretion with Respect to Individuals Who Came to the United States as Children,” and was issued by the then Secretary of Homeland Security, Janet Napolitano. Despite the fact that Congress rejected the program on multiple occasions during the normal legislative process, DACA created a non-congressionally authorized administrative program permitting “certain individuals who came to the United States as juveniles and meet several criteria…to request consideration of deferred action for a period of two years, subject to renewal, and eligibility for work authorization.”

As outlined in the final version from June 15, 2012, DACA applies to individuals  “if they had come to the U.S. before their 16th birthday; were under age 31; had continuously resided in the United States since June 15, 2007; and were in school, graduated or had obtained a certificate of completion from high school, obtained a General Educational Development (GED) certificate, or were an honorably discharged veteran of the Coast Guard or Armed Forces of the United States.” Applicants are ineligible if they have been convicted of a felony or a significant misdemeanor.

Since its inception, hundreds of thousands of applicants have been granted DACA status. The Migration Policy Institute estimates that there are about 1.3 million people who fall under the criteria for DACA status and about 699,350 people who actually have it. The latter statistic has grown by almost 10,000 people since September 4, 2017, the day Acting Attorney General Jeff Sessions stated that DACA was “an unconstitutional exercise of authority by the Executive Branch.” Under the legal advice of the Attorney General, the Acting Secretary of Homeland Security issued a memorandum rescinding the June 2012 memorandum that established DACA and set forth a plan to phase out the program.

Though President Trump promised his supporters a new immigration plan, he has been faced with several legal complications of late. The most recent of which is the decision by the 9th Circuit Court of Appeals in Regents of the University of California v. DHS (“DACA II”). After considering whether to lift an injunction ordering the federal government to continue the DACA program, the 9th Circuit upheld the temporary order made on January 8, 2018 by Judge William Alsup of the U.S. District Court for the Northern District of California, preventing President Trump from repealing DACA and requiring the U.S. Citizenship and Immigration Services (USCIS) to continue accepting renewal applications for DACA status.

Following the decision, the government took the unusual step of seeking to bypass the review in the 9th Circuit and appeal directly to the U.S. Supreme Court. This legal mechanism is called a “cert. before judgment” and was filed January 18, 2018. This request is granted by the Supreme Court “upon a showing that the case is of such imperative public importance as to justify deviation from normal appellate practice and to require immediate determination in this Court.” On February 26, 2018, the Supreme Court announced that it had “denied cert.” and the case must begin with the 9th Circuit Court of Appeals.

On November 8, 2018, upon review in the 9th Circuit, it was ruled that the “rescission of DACA—at least as justified on this record—is arbitrary, capricious, or otherwise not in accordance with law.” This ruling was made by a three-judge panel: Kim McLane Wardlaw, Jacqueline H. Nguyen, and John B. Owens. Judge Owens repeatedly questioned whether or not the motive to repeal DACA was racially charged. During litigation, Hashim Mooppan, the Justice Department counsel defending the Trump Administration’s attempt to end DACA, claimed that Trump’s inflammatory statements calling Mexicans “drug dealers, criminals, rapists” had nothing to do with the decision of Acting Secretary of Homeland Security Duke. In response to these claims, Judge Owens stated, “[r]ight, but the Acting Secretary ultimately reports to the President of the United States, and he has said all kinds of things that could be relevant in this litigation.”

Ultimately, the 9th Circuit found that the decision to end DACA was based “solely on a misconceived view of the law.” Affirming that the Executive Branch has power in the enforcement of our nation’s immigration laws, the 9th Circuit justified their ruling by finding: “Our decision today does not curb that power, but rather enables its exercise in a manner that is free from legal misconceptions and is democratically accountable to the public.”

This case is accompanied by two others, creating a trio of cases which challenged the recission of DACA by the Trump Administration. Following the District Court in California’s decision, a U.S. District Court in Brooklyn, New York similarly issued a preliminary injunction on February 13, 2018, requiring the government to accept DACA renewal applications. The government has since appealed the decision to the Second Circuit Court of Appeals. Oral arguments are tentatively scheduled for the week of January 22, 2019. The third case originates in the U.S. District Court for the District of Columbia. On April 24, 2018, Judge John Bates issued his decision that would reinstate DACA as it was before September 5, 2017, when USCIS was accepting first-time applications for DACA rather than just renewal applications.

Further pursuing their goal to end DACA, despite adverse rulings made in the federal courts, the Department of Justice has requested that the Supreme Court review the trio of cases which block President Trump’s plan to end the DACA program. On Monday, November 5, the Department of Justice said: “An immediate grant of certiorari is necessary to obtain an appropriately prompt resolution of this important dispute.” The Trump Administration has worked tirelessly to repeal the progress of the Obama Administration, yet has had little success in its efforts to end DACA. If they want to successfully terminate the program, they will need to take a different approach than their currently unsuccessful one.

Isabella Caracta is a freshman from Piscataway, New Jersey, intending to major in Psychology and Global Health.