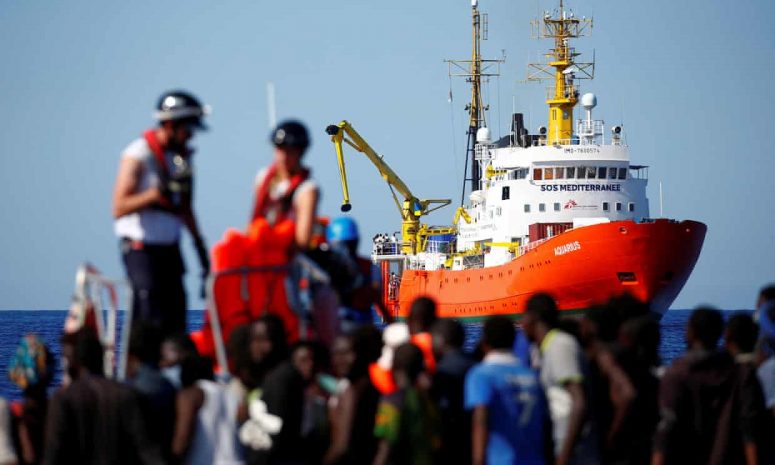 This past summer, the Aquarius Migrant search and rescue ship run by Doctors Without Borders landed on Italy’s coast carrying 629 migrants. The migrants came from 26 countries in Africa, and includes 123 minors, 11 small children, and seven pregnant women. All of the migrants were rescued by the Aquarius from six boats that were overcrowded in the Mediterranean. Aquarius currently monitors the area between the coast of Libya and Italy, as many refugees coming from sub-Saharan Africa pass through Libya on their way to Italy.

Italy’s far-right Interior Minister, Matteo Salvini, refused the ship, saying “Rescuing lives is a duty, transforming Italy into an enormous refugee camp is not. Italy has stopped bowing its head and obeying.” Italy directed Aquarius towards Malta, claiming that the ship was closer to their coast. Malta also refused the ship, deferring responsibility back to Italy. After being stranded at sea for a week, Spain’s new socialist prime minister, Pedro Sanchez, finally welcomed the ship. “It is our duty to help avoid a humanitarian catastrophe and offer a safe port to these people, to comply with our human rights obligations,” President Sanchez said.

This reignited an ongoing debate about a country’s responsibility to give asylum to refugees. Africa, particularly the sub-Saharan region, hold over 26 percent of the world’s refugee population. Many seek refuge in Europe, but as the situation with the Aquarius ship demonstrates, there are still many systems in place that prevent them from seeking better lives. These systems include the process of migrating and the challenges refugees face once they reach a European country, such as receiving asylum, and coping with xenophobia and economic inequality.

Here’s what you need to know about the African refugee crisis.

Where most refugees are from:

Many sub-Saharan refugees seek asylum because of violence stemming from internal conflict. Those from Central African Republic escaped a civil war that has been going on since 2016, displacing over a million people. About 280,000 Somali immigrants live in Europe, largely due to the multiple civil wars the country experienced, including the current war between the Somali government and various opposition groups, such as al-Shabaab. Other regions that have produced asylum seekers because of internal conflict are the Democratic Republic of Congo, Chad, and Sudan.

In addition to conflict, economic instability is another primary motive for immigration. The average income in Africa is $2000, which is $1625 less than in other areas of the developing world. In the United Nations Development Programme which measures human development based on life expectancy, adult literacy, and purchasing power, Sub-Saharan Africa has 14 of the 17 refugee-producing countries in the bottom fifth of the index.

Their journeys to Europe

Like the sub-Saharan African refugees on the Aquarius, many sub-Saharan refugees go to Europe from Libya and cross the Mediterranean on overcrowded boats. They hire smugglers to get them through the Sahara desert to Libya, where many are subject to abuse by smugglers upon arrival. Sabha, a city in the south of Libya is filled with corpses from migrants who either were murdered or died from thirst and hunger. There is also the general fear of getting sold into a slave market in Libya, as displayed by videos of African refugees being sold in a slave auction in 2017. Many claim that European countries, such as Italy, is contributing to the abuse of the African refugees on their journey to Europe. Some critics of the European Union say that through tightening borders, the EU is ‘outsourcing’ responsibility to countries like Libya and Niger. However, Libya and Niger aren’t as well-resourced, and don’t have the same human rights standards as European countries, which puts refugees in danger.

The European Union currently has the Common European Asylum System, which states that migrants who qualify as refugees due to safety concerns may be granted asylum. Undocumented economic migrants, which are migrants who do not face an immediate threat of danger, are required by the EU to be deported to their country of origin. An immediate threat of danger is measured by whether a person, who is deported to their country of origin, will experience the same situation that they were escaping from. Many member states, such as Italy, have violated the Common European Asylum System, and abused the “Dublin” regulation, which states that EU member states can deport asylum seekers to their first country of entry. The “Dublin” regulation is controversial, especially among states that are common first points of entry, such as Greece.

In general, there aren’t many consequences by the European Union for when a country doesn’t follow the Common European Asylum System or international law. Italy violated the International Convention for the Safety Life at Sea, which states that any stress at distress in sea must be helped by the country it’s closest to, but didn’t received repercussions from the EU. Nor are there any consequences for countries, like Greece, where abuse of refugees persists.

Furthermore, the Common European Asylum System doesn’t have a clear set of regulations for how countries are supposed to treat asylum seekers. There has been more pressure in the past to make the regulations more specific to hold the countries more accountable. However, this remains incredibly controversial to countries that don’t want many refugees. In fact, the proposal for a set of new regulations in the Common European Union system has been noted as a primary motivation behind England’s Brexit. Nearly 75 percent of British people who voted in favor for Brexit, stated that immigration was the main factor in their decision.

The African refugee crisis does not seem to be ending anytime soon, as economic and political instability still persists in many parts of the continent. However, the mistreatment of refugees by the European Union doesn’t only apply to sub-Saharan African refugees, but also refugees coming from parts of the Arab world, such as Syria and Jordan.

The case with the Aquarius begs the question of how much power the European Union wields over member states. Do sovereign countries have a right to dictate who enters their borders, or do they relinquish that right when they become a part of the EU? Furthermore, who ought to be holding these smugglers, slave market organizers, and other abusers of refugees, accountable?

Nora Benmamoun is a first year undergraduate student from Champaign, Illinois and plans to major in psychology and public policy.