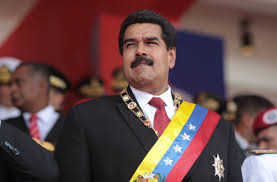 Summary: Venezuelan President Nicolas Maduro has been accused of silencing all political dissent by jailing journalists and tampering with elections. Venezuelans have responded through widespread protests.

Nicolas Maduro and the United Socialist Party were elected in 2013, and ever since, his government has faced great criticism for oppressive practices.  The opposing party, the Democratic Unity Roundtable (Mesa de la Unidad Democratica), was founded in 2008 as a coalition of several former parties, in the hopes of preventing the control of the Socialists. The MUD initially led the National Assembly and attempted to enter discussions with Maduro, but in March 2017, he ended the assembly, sparking national protests.

While Venezuela technically allows citizens to protest, Maduro specifically banned protests the weekend of the elections. He prohibited all public meetings and demonstrations, gatherings and other similar acts that might “disturb the electoral process.”  Those who violated the ban could have been sentenced to between five and ten years in prison.

Nationwide protests occurred anyway.  In response to the largest protest in Caracas, the Venezuelan National Guard was called in to block the protesters’ routes and spray the crowd with tear gas.  Death tolls have been estimated to be as high as 111, with nearly 2,000 people injured.  Protesters say they treat the conflict, “like a war.”

A large portion of the protests stem from dissatisfaction with living conditions in Venezuela, where people face severe medical and food shortages.  Maduro denies that any such problems exist–his Minister for Foreign Affairs Delcy Rodriguez claimed: “There is no humanitarian crisis in Venezuela.  There is not.” In 2001, under Maduro’s predecessor Hugo Chavez, Venezuela was one of the richest countries in South America.  Now, it is among the poorest.

The protests are also motivated by what is seen as election tampering by Maduro. On July 30, 2017, elections were held to determine the members of the Venezuela Constituent Assembly. The Assembly would be responsible for rewriting the Venezuelan constitution–a move that some international humanitarian groups consider to be Maduro’s attempt to consolidate power. Some say that voter turnout numbers released by the government were inflated by as many as one million votes.

International response to Maduro’s actions has been timid at best, primarily due to a general lack of options for legal recourse as part of many international agreements.

The United Nations has discussed the crisis in Venezuela, criticizing Maduro for use of excessive force as well as arbitrarily detaining thousands of citizens.  Venezuela has violated several articles of the Universal Declaration of Human Rights, primarily those concerning freedom of expression and freedom of assembly.  However, the UN has not determined a course of action beyond calling for an investigation.

The International Criminal Court has also launched their own investigation after a group of Colombian senators filed a complaint against Venezuela.  The investigation is ongoing.

The European Union declared they would not recognize the Constituent Assembly, but refused to institute sanctions for fear that they would only contribute to the nation’s food shortage.

The Union of South American Nations (UNASUR) has been the most outwardly disapproving: the majority of member nations released a joint statement condemning the government’s response to the protests, although Ecuador and Bolivia–which both have Socialist governments–declined to release a statement.

Venezuela is a member of the Organization of American States. The OAS has met several times to discuss the situation in Venezuela—however, Article 19 of the OAS charter states: “No State or group of States has the right to intervene, directly or indirectly, for any reason whatever, in the internal or external affairs of any other state.  The foregoing principle prohibits not only armed force but also any other form of interference or attempted threat against the personality of the State or against its political, economic, and cultural elements.”  As such, the OAS is relatively limited when it comes to their response.

In spite of this, President Trump has levied sanctions against several top-level Venezuelan officials, as well as threatened to employ a “military option,” though he has not gone into detail. Maduro’s defense minister called the threat “a crazy act.”

The OAS charter also states: “It is imperative that citizens of every country be able to rely on electoral processes that are free, peaceful, and transparent.”  In 2017, OAS has released 21 press statements condemning the violence and government response in Venezuela.  In response, Venezuela has started the withdrawal process from OAS, which is projected to take two years.

The regional elections in October 2017 provided further disappointment for the protestors–in an upset victory, the Socialist party won 17 out of 23 available governorships. The MUD had been predicted to make sizeable gains, but they claim that Maduro tampered with the elections again, this time by changing the location of more than 200 voting sites in the days leading up to the elections.

For now, the MUD looks forward to the presidential election in December 2018–though some fear that the Constituent Assembly will call it off and place Maduro in a position of indefinite power.