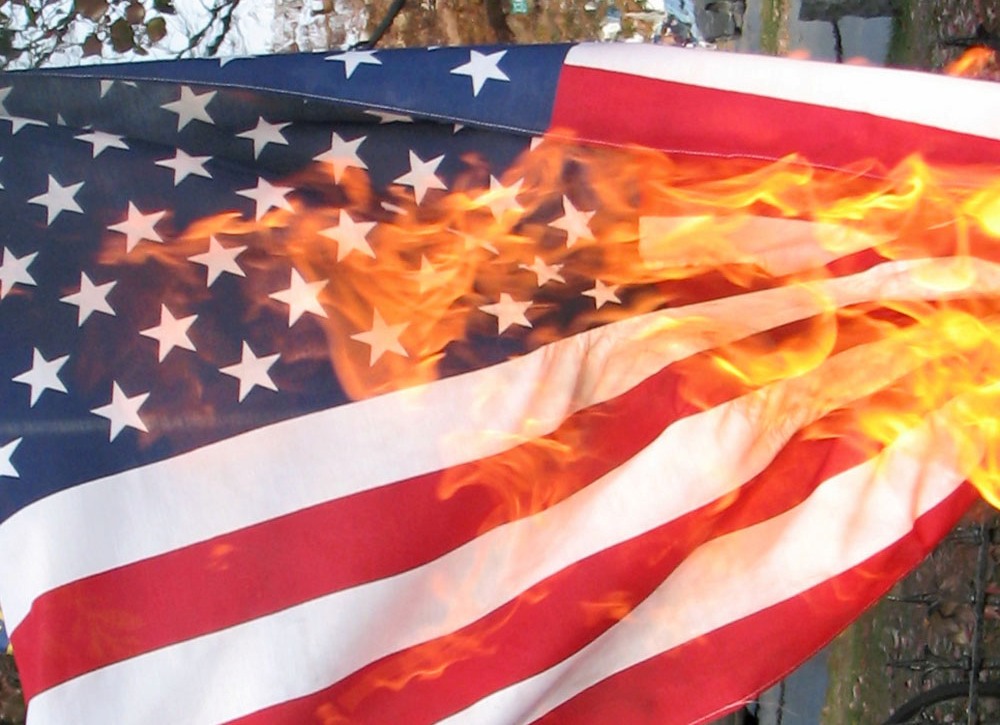 The 1st Amendment is one of the staples of a functioning, free democracy. Yet, under the current administration, we have seen multiple attempts to undermine the freedoms of speech, expression, press, and religion enshrined in the 1st Amendment.

In November 2016, a tweet by then-President-Elect Donald Trump attacking flag burners sparked controversy related to the tension between the freedom of speech and the legality of flag desecration.

A quick review of the history of flag desecration in American history clearly illustrates the complex and contentious nature of the topic. Throughout the Vietnam war, antiwar activists often desecrated the American flag as a form of expressive, social protest. The ambiguity surrounding whether such an act was protected by the 1st Amendment lasted three decades; in the meanwhile, law enforcement and the lower courts held much of the discretionary power regarding each of the cases. The constitutional protection of flag desecration was finally addressed by the Supreme Court in Texas v. Johnson (1989), in which Johnson was arrested for violating a Texas statute that criminalized the desecration of a venerated object – a statute present in 48 out of the 50 states at the time. In a 5 to 4 decision, the Court ruled in favor of Johnson and the protestors, establishing the principle that speech or expression that is greatly offensive to the public is nonetheless protected under the Constitution. As the majority opinion of the case stated, “the principal function of free speech under our system of government is to invite dispute.” According to the Johnson majority, the Bill of Rights serves its purpose best when free speech creates unrest, dissatisfaction and controversy.

Regardless of the Court’s decision, flag desecration has always been condemned by public sentiment and political authorities. Echoing Rehnquist’s dissent in Johnson, opponents of flag burning perceive the flag as uniquely sacred because it symbolizes national unity. In response to the Johnson ruling, Congress passed the Flag Protection Act of 1989, which prohibited anyone from “knowingly” desecrating the US flag. The act was again overturned in the Supreme Court case, US v. Eichman (1990), in which the Court refused to change its interpretation of the 1st Amendment established in Johnson.

This tug-of-war culminated in six unsuccessful attempts on the part of Congress to pass a constitutional amendment allowing lawmakers to criminalize flag desecration. This political effort has proven challenging, however, since all constitutional amendments stringently require a supermajority in both chambers of Congress or the approval of three-quarters of state legislatures. Proponent of an anti-flag-burning amendment have appealed to the unique status of the American flag as a symbol for democracy and freedom that sets it apart from other viewpoints. While these inherent qualities of the flag may be present, the government should not be fully involved in the decision of which types of offensive or hateful speech warrant criminalization. In fact, the Brandenburg test, which originated from the Brandenburg v. Ohio (1969) case, allows for the restriction of speech only when the speech is “directed to inciting or producing imminent lawless action,” and/or is also “likely to incite or produce such action.” In Brandenburg, the Supreme Court ruled that even the KKK should be allowed to rally and spew hateful speech about African Americans and Jews. While the intuitive response to offensive speech or expression for most morally panicked people is to advocate for its criminalization, (consider prostitution and blackmail) these issues usually require a more comprehensive form of contemplation and foresight into other unintentional consequences of its criminalization. Beyond a matter of public safety, curbing speech deemed as offensive may have a censorial effect on viewpoint diversity and may ultimately become a mechanism of social control. In fact, the manner in which we treat offensive, absolutely repulsive speech is the test of our baseline tolerance of free speech and of people who have disparate viewpoints.