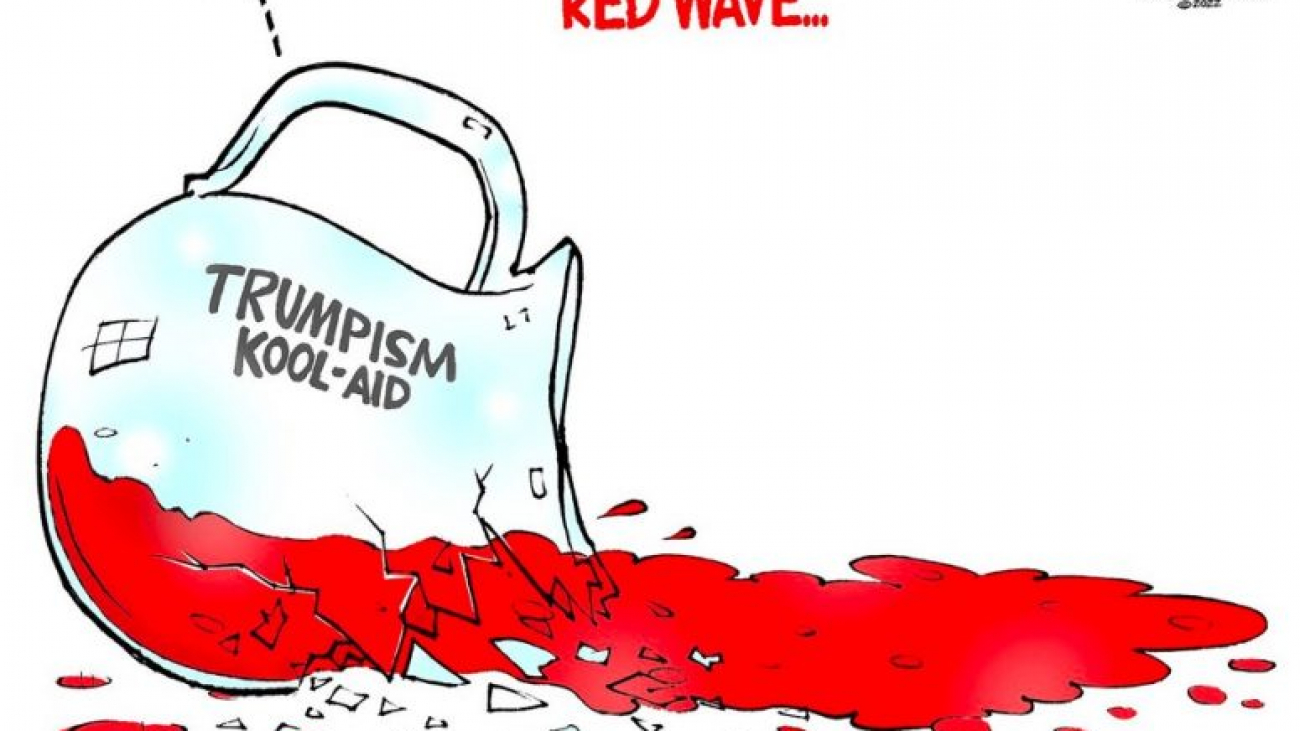 On Wednesday, November 9th, 2022, millions of Americans awoke to the reasonably predictable news that the Republicans won both houses of Congress, securing majority control of the legislative branch. This reality, albeit utterly false, seemed almost a certainty in the weeks leading up to the 2022 midterm election. Through this period, numerous online pundits claimed that a combination of low presidential approval ratings, inflation, falling stock prices, and the war in Ukraine assured that, come election night, the Republican party would wash over the halls of Congress in a torrential “Red Wave.” If the title of this article is any indication, no such deluge materialized. Democrats held control of the Senate, while the Republicans gained a slim majority of nine votes in the House of Representatives. The GOP’s strategic nightmare led many political commentators to question what caused this failure, with two main issues emerging as the most likely culprits: poor candidate choice and intra-party conflict.

Although evaluating the appeal of a candidate is an incredibly arduous process, there were specific Republican candidates, especially in the Senate, that associated themselves with very controversial stances, ultimately condemning their election bid. Republican candidates like Blake Masters and Kari Lake repeatedly questioned the results of the 2020 election, subsequently being labeled as “election deniers.” Their Democratic opponents of these candidates honed in on this notion, especially Arizona gubernatorial candidate Katie Hobbs, who, as a former election official, framed her campaign as an effort to uphold voting norms. Thus, these GOP nominees were defined by their rejection of the 2020 election results, making Democrats who denounced this “big lie” far more appealing as candidates.

Additionally, Republican strategists seemed to, once again, fall victim to a plague of celebrity appeal. Candidates such as Herschel Walker and Mehmet Oz were propped up in an attempt to position themselves as political outsiders, mirroring the strategy of former President Trump before the 2016 election. While such a plan may have worked six years ago, the heightened scrutiny brought upon by celebrity status has forced many of these candidates to address past controversies. Herschel Walker, for example, has been criticized for his past actions involving his ex-wife and previous girlfriends. At the same time, Mehmet Oz was called a “snake oil salesman” for promoting unsubstantiated claims about weight loss supplements on his television show. Consequently, Oz lost his Senate race in Pennsylvania, and Walker recently lost his run-off election against Senator Warnock.

Other poor candidates include Bo Hines, a failed U.S. House candidate for North Carolina’s newly-created 13th Congressional District, who moved to the district only a month before the election. Subsequently, his opponent, Wiley Nickel, denoted Hines as “out of step” with the community, creating a situation where one issue can define a Republican candidate. While there are undoubtedly other personal and policy variables that swayed voters, the fact is that Republicans repeatedly supported candidates who possessed glaring political weaknesses in crucial federal races.

Following the conclusion of the 2022 midterm elections, the Republican party appears to be fractured in two. On one end, lie the more traditional, establishment Republicans, such as Mitch McConnell and Mitt Romney, who fervently rejected former President Trump’s election denial. The other, more Trump-aligned faction, includes prominent Republicans such as Ted Cruz, Matt Gaetz, and Lauren Boebert. With this lack of a cohesive message, Republicans struggled to create a coalition of voters around key policy failures by the Biden administration. Furthermore, by aligning themselves with a candidate instead of specific issues, many pro-Trump Republicans failed to garner enough support in a year without Trump on the ballot. For example, in 2020, the majority of the former president’s endorsements won re-election, compared to an equal percentage of winners and losers in the 2022 midterms. While the coattail effect, the propensity for candidates to win elections by associating themselves with popular candidates, is likely culpable for this outcome, the fact remains that the Republican party is split.

Furthermore, exit polling revealed that only 16 percent of Americans support Trump as a candidate, compared to 37 percent in 2020, indicating that the benefits of a Trump endorsement may be on the decline. Had this divide not existed, the Republicans likely would have gained control of the Senate and further expanded their lead in the House. However, some pro-Trump candidates could have lost their seats without the support of the former president. This meddling with GOP strategy is not isolated to the 2022 election, with many Republicans claiming that the former president was responsible for both Georgia Senate losses in 2020 by furthering his election-denying rhetoric. These repeated internal failures indicate that the Republican party leadership either needs to shift its support behind former president Trump or reorganize itself under another candidate.

While this is a very brief analysis of an incredibly nuanced issue, it is obvious that the GOP needs a change. For months leading up to the 2022 midterm elections, many news channels spouted how a “red wave” was inevitable come November. In reality, the midterms culminated in a “red trickle,” as some conservative political commentators have noted. Supposing that  Republicans truly want to avoid another disaster in 2024, they need to distance themselves from notions of election denial and prop up candidates that run on specific policy issues within their states instead of broader national talking points.

Despite this article’s relatively pessimistic evaluation of the GOP’s current situation, there were some promising results in places like New York and Florida where candidates succeeded by framing the narrative in terms of policy instead of personality. Individuals such as Governor Brian Kemp and Representative Lee Zeldin provide an excellent template for GOP politicians to frame their state and local elections around specific, reasonable, policy solutions along with the failures of their opponents. On the other hand, Governor DeSantis’ strong performance in Florida may indicate that his brand of conservatism is a viable solution for a party in search of a cohesive national agenda. With that said, these two distinct sects of the GOP, the Trump wing and the neo-establishment Republicans, seem to be gearing up for a battle in the 2024 primary that could decide the fate of the party.