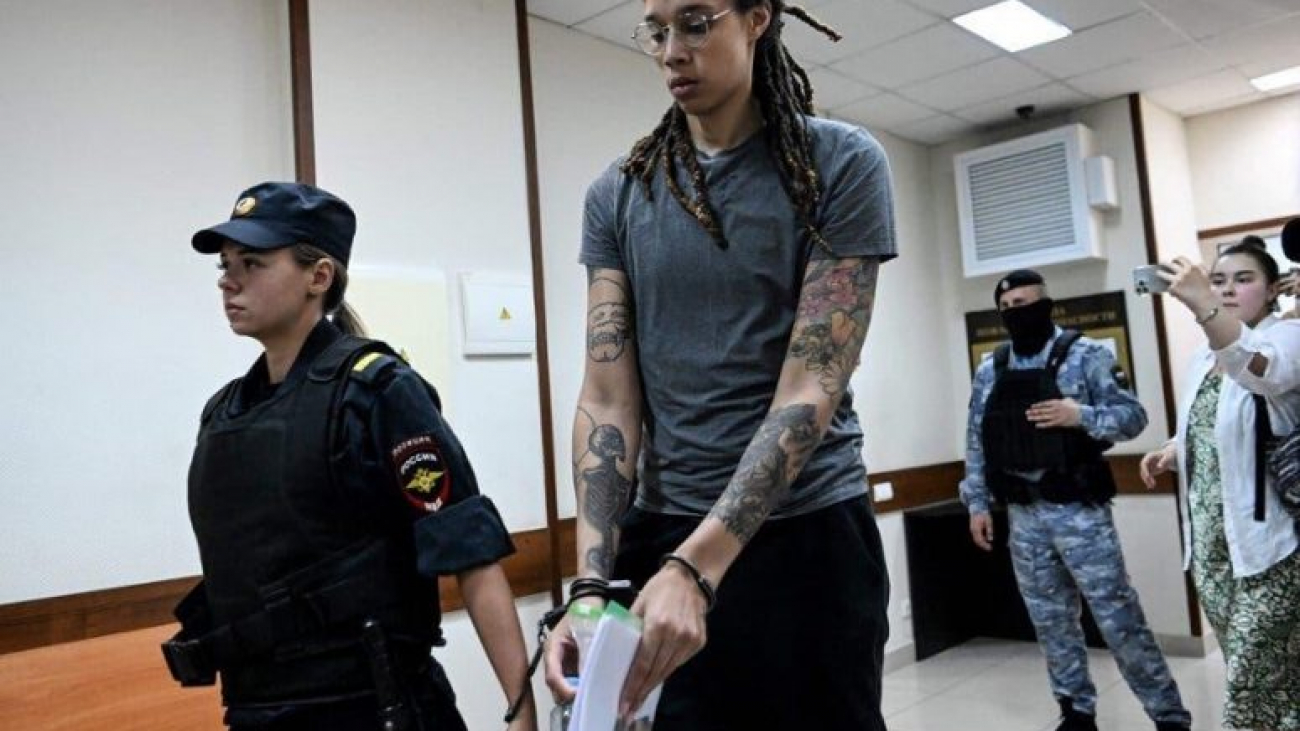 While traveling to Russia in February 2022, Brittney Griner was taken into custody by Russian customs officials at the Sheremetyevo International Airport. The 31-year-old Griner is a standout athlete who has collected numerous accolades throughout her career, including two Olympic gold medals and seven All-Star appearances in the WNBA. Russian officers alleged that Griner was smuggling vape cartridges with cannabis oil into the country, where she played professional basketball in the WNBA offseason. Griner and her lawyers claimed that she had unintentionally packed the canisters of cannabis oil, which contained less than a gram of the substance at the time of the seizure. She possessed them for medical purposes, as she had a prescription in Arizona. Griner faced a penalty of up to ten years in prison and a substantial fine. On August 4, Griner was sentenced to nine years in a penal colony after pleading guilty to the charges. Griner has been subject to solitary confinement and other forms of physiological pressure during her time in captivity.

United States officials have made numerous attempts to secure her release. A week before the August sentence date, President Biden offered a prisoner swap to liberate Griner. The deal included former U.S. Marine Paul Whelan, who is serving a 16-year sentence for allegedly spying on Russia on behalf of the United States. Whelan originally entered Russia to attend his brother’s wedding. In exchange, the Biden administration offered to free Viktor Bout, a Russian arms dealer imprisoned in the United States. To complicate the negotiations, President Putin demanded the inclusion of Vadim Krasikov, a convicted assassin serving a life term. While this is all of the details regarding a potential exchange at the moment, President Biden has confirmed that talks are ongoing with Russian diplomats. Furthermore, President Biden signed an executive order to improve the government’s ability to deter the wrongful detention of U.S. nationals and citizens. The order includes the potential imposition of financial sanctions and visa bans as consequences for taking political hostages. However, Russian officials have declared that “prison exchanges cannot be considered until the legal process has concluded.” Therefore, efforts to bring Griner back to the U.S. have stalled of late.

In late August, Griner appealed the verdict and pleaded for a more lenient sentence. According to Russian legal experts, the nine-year term in the penal colony is “an unprecedented punishment” for a marijuana possession charge. While Griner has issued numerous public apologies for her actions, a Russian appeals court upheld the sentence on October 25. This facilitated a subsequent transfer to a penal colony. Russian penal colonies have often been subject to harsh criticism for the inhumane treatment of inhabitants, overcrowding of living quarters, and harsh mandatory work conditions. Griner’s transfer began in early November, but there’s little information to gather beyond that. Prisoners are not allowed to communicate with any outside individuals for up to two weeks while they’re being moved. Often, even lawyers and family members are unaware of which penal colony the prisoner is headed for until they arrive. Experts have predicted that Griner will be held at Correctional Colony No. 17 in Mordovia, where Whelan is currently being held.

Griner’s situation has also brought into focus the state of female professional athletics in the U.S. Female professional basketball players often travel overseas, where the women’s game is more popular, during their off time from the American season. The impetus for the WNBA’s move is often the larger salary that they garner by playing in Europe. Over 70 WNBA players annually supplement their income by playing in secondary leagues. However, unease over Griner’s treatment in Russia has halted the dynamic. Russian teams have been suspended from the EuroLeague, the top basketball association in Europe, eliminating a substantial stream of income for many female basketball players. Now, the WNBA has called for greater national exposure and investment into the sport to increase popularity. The culture of belittling women’s sports must end, in part for the literal safety of the athletes. With the emergence of name, image, and likeness deals for college athletes to bolster their national footprint, the newest generation of female basketball players can hopefully be the face of the resurgence of the WNBA.

Unfortunately, it seems that a speedy resolution to Brittney Griner’s circumstances is unlikely. Negotiations have been strained due to Russia’s ongoing invasion of Ukraine, and U.S. officials have expressed the notion that Griner is acting as political leverage. The deteriorating relationship between the United States and Russia has disrupted any potential channels between Presidents Biden and Putin. The nightmare continues for Griner as her future remains unclear.