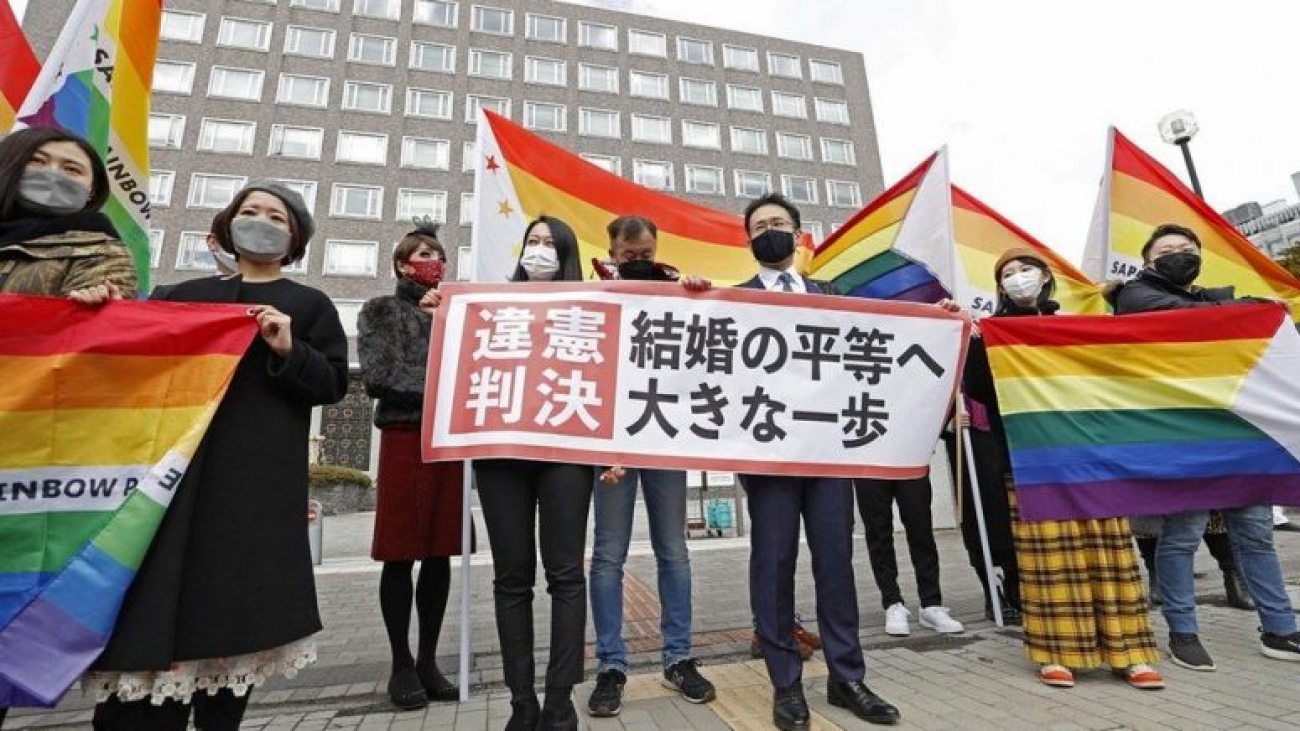 On March 17, Sapporo District Court in Hokkaido, Japan ruled that the country’s same-sex marriage ban is unconstitutional. The ruling was in favor of a lawsuit filed by six people (two male couples and one female couple) in 2019. The plaintiffs sued for 1 million yen ($9,168.42) for the pain of not being able to legally marry. While the court ruled that the marriage ban is unconstitutional, it rejected the plaintiffs’ demand for compensation.

Judge Tomoko Takebe cited that the ban violated Article 14 of the Constitution that states “there shall be no discrimination in political, economic or social relations because of race, creed, sex, social status or family origin.” Judge Takebe pointed the government’s failure to provide the benefits of married, heterosexual couples as discriminatory by stating, “Sexual orientation cannot be changed or selected by a person’s will. It is discriminatory treatment… that they cannot receive even some of the legal benefits that heterosexuals do.” Unlike heterosexual couples, same-sex couples in Japan cannot legally marry, inherit their partner’s assets, or have parental rights over their partner’s children.

The plaintiffs argued that the ban also violated Article 24 of the Constitution which states, “Marriage shall be based only on the mutual consent of both sexes and it shall be maintained through mutual cooperation with the equal rights of husband and wife as a basis.” However, the judge ruled that the ban did not violate this article as Article 24 only pertained to heterosexual marriages, which the wording “both sexes” implies. Judge Takebe cited this as the reason for dismissing the compensation sought after by the plaintiffs. The plaintiffs plan to appeal the court’s rejection of compensation. Their appeal is expected to go to the Supreme Court.

However, this victory for the LGBT community is not final because the ruling does not legalize same-sex marriage. This can only be done by the Japanese Parliament by passing legislation. However, this ruling is likely to act as a strong step forward to full legalization of same-sex marriage. The ruling will place pressure on other judges as similar lawsuits have been filed elsewhere in Japan. The ruling was not approved by the federal administration. Chief Cabinet Secretary Katsunobu Kato responded directly to the ruling by stating, “The government does not see the law on marriage as unconstitutional.” He added that the government will “carefully watch” the other similar lawsuits that were filed in Tokyo, Osaka, Nagoya, and Fukuoka.

Previously in March 2015, Tokyo’s Shibuya district established “partnership certificates” that was considered a step forward for LGBT rights in Japan. These certificates allowed for same-sex partners the right to hospital visitation and shared rental agreements. However, the partnership certificates are not legally binding and only recognized in certain municipalities. Nevertheless, these certificates marked the first time for a government to recognize same-sex marriage in East Asia, a region that is traditionally conservative in recognizing the LGBT community. In Asia, only Taiwan has legalized same-sex marriage. Among the G7 nations (Canada, France, Germany, Italy, Japan, the United Kingdom and the United States), only Japan has not legally recognized same-sex marriage.

This ruling and other signs point toward more progress for the LGBT community in the historically conservative nation. A 2018 study conducted by Dentsu Inc. showed that 78.4% of the Japanese public approved or were likely to approve of same-sex marriage. A higher 82.7% of people approve of the Tokyo Metropolitan Government’s anti-discrimination for the LGBT regulations. The study also showed that 8.9% of people identified themselves as LGBT while 65.1% of these LGBT respondents said they have not told anyone about their sexuality. With public awareness and support for the LGBT community growing in Japan, lawmakers and judges are under increasing pressure to support anti-discriminatory practices and legislation. Without a national LGBT anti-discrimination legislation, Human Rights Watch and 116 groups signed a letter urging Prime Minister Yoshihide Suga to introduce such legislation before the Tokyo Summer Olympics. The American Chamber of Commerce in Japan also published a recommendation to extend LGBT rights highlighting business disadvantages by not legalizing same-sex marriage and anti-discrimination legislation. The Commerce stated that legalizing same-sex marriage would “remove handicaps facing companies doing business in Japan in recruiting and retaining talent and in treating the full diversity of their workforce equitably.”  Such sentiment is echoed by other business leaders in Japan wishing to keep the world’s third largest economy competitive compared to its Western counterparts that have largely accepted same-sex marriage.