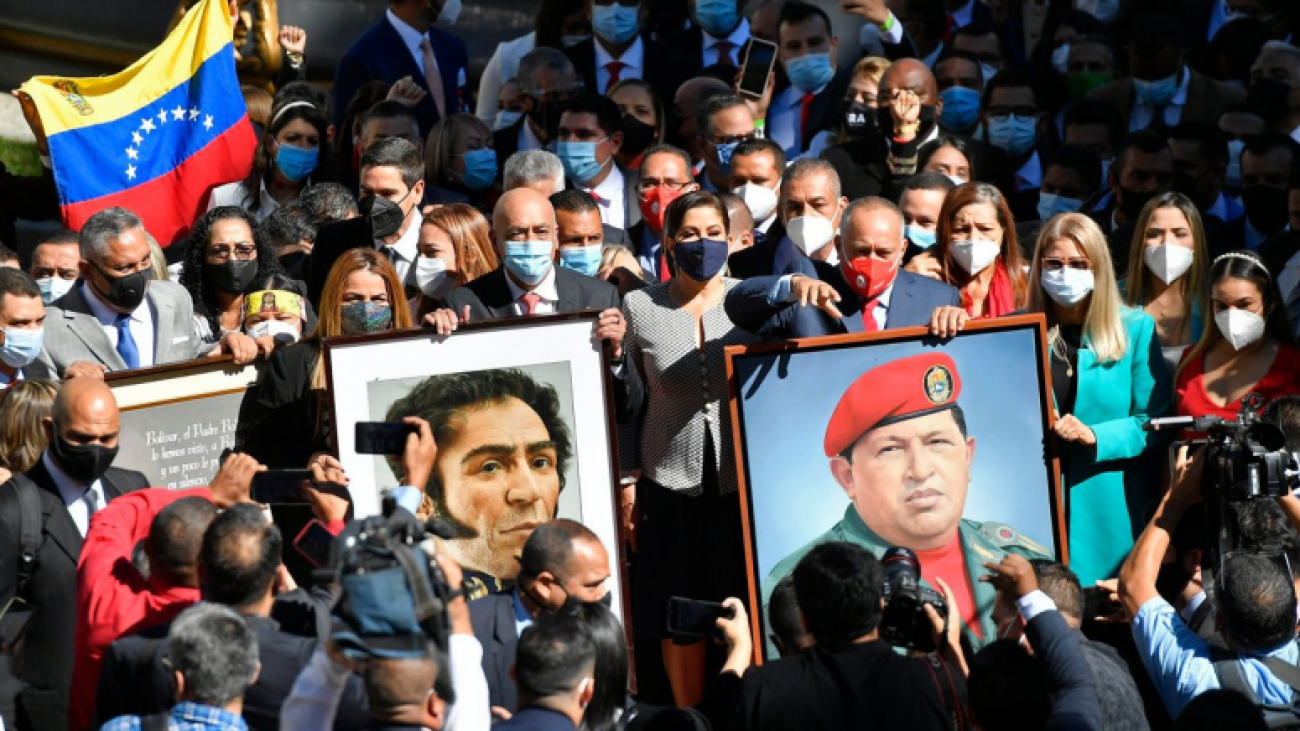 For the past two decades, the socialist party PSVU has run the Venezuelan government. Initially controlling only the executive branch, the PSUV consolidated control of the judiciary, electoral council, and now the legislative body. Since the transition from the Chávez regime to Nicolás Maduro’s government, the Venezuelan economy has collapsed and prompted an exodus, largely into Colombia. A prime example of a decaying petrostate, Venezuela has fallen prey to “Dutch disease”, when a government is heavily dependent on natural resource exports, oil and fossil fuels in this case and there is little funding to other sectors. Additionally, power is concentrated in the hands of a few, and corruption is rampant in every level of the political and economic structure. The economic collapse under Maduro is due to the decrease in the outflow of oil, leaving the country with little income.

With hyperinflation skyrocketing and many Venezuelans worried about putting food on the table, it was doubtful that Maduro would win his re-election bid. Maduro was only able to even hold an election because he created a parallel National Assembly–he had no control over the legitimate one, which was run by the opposition. The election was rigged from its very inception. Opposition candidates were barred from running, or jailed, or fled the country, and the opposition parties themselves boycotted the polls. Seemingly counterintuitive, the boycott was a protest of the unfair election. The opposition wasn’t going to win even if they voted, so they made a stand by not voting. Far from democratic, free, or fair, the fraudulent elections secured Maduro’s second six-year term in May 2018. Maduro was sworn in for his second term in the beginning of January 2019. Even so, the opposition never recognized his re-election, and by extension, neither did the legislative body. Within a few weeks, the opposition moved its queen.

On January 23, 2019, Juan Guaidó, leader of the opposition controlled National Assembly, the legislative body in Venezuela, declared himself acting president. The National Assembly considered the presidency vacant because of the usurped election, and found constitutional justification to put Guaidó in the seat. The declaration initially sparked a level of excitement and nearly a year of protests.

The international community chimed in, with almost fifty countries publishing official statements in support of Guaidó, the US, European nations, and Colombia to name a few. Conversely, Russia and China in particular demonstrated their support for Maduro. The stage was set for an international conflict, especially with President Trump placing all options on the table, including military involvement. Even so, no one was willing to move their pawns.  Colombia, heavily affected by the refugee exodus, was willing to be a conduit for aid movement and transportation. Guaido’s movement began ensuring the movement of aid from the border into Venezuela, aided heavily by the $52 million America provided.

Expectedly, Maduro’s response was, to say the least, unfriendly. He already had the security services and military on his side, and the National Assembly had long been rendered relatively powerless. Years before, Maduro created another National Assembly, a parallel, constitutionally unrecognized legislature that he relied on. The opposition controlled National Assembly was viewed as powerless, and as a result, it was. Guaidó attempted many times to engineer a coup in the military, but their allegiance lay solely with Maduro. He’s ensured military leadership is cared for; they had and have no reason to leave his side.

Since then, the movement has been rather standstill. Guaidó embarked on an international tour in early 2020, meeting world leaders, but it bore little fruit for his movement. It occasionally pops in the news, but Maduro has held onto power, and Guaidó has been left in a rather awkward position, declaring himself President but having little to show politically. Constitutionally, he retains the right to be the de jure leader since he used Articles 293, 296 and 233 to legally draw his path to interim President. Maduro simply ignored him by deferring to his parallel National Assembly, which never disputed his farce of a re-election. They cling to a failed strategy that is only making a mockery of democracy.

In the beginning of January of this year, the Maduro regime swore in 277 new members of Congress to his parallel National Assembly, what is known as a rubber stamped Congress. To add to the list of Maduro’s offenses, nepotism made an appearance. Maduro’s son and wife are part of this new Congress, now effectively an extension of the executive office. This election of the second generation of parallel members of Congress solidifies this second legislature. Maduro has now effectively consolidated every legal process in the Venezuelan government, from the making of laws to their enforcement. The Constitution now serves as a farce, with Maduro operating within this facade of its framework.

The former National Assembly, while officially stripped of power, continues to meet mostly virtually. In a show of power, the military placed soldiers around the members of the opposition party, brandishing their control and squashing an attempt to combat the new National Assembly. This leaves an opening for the United Nations or International Criminal Court to possibly bring human rights violations charges against the military or Maduro himself. A UN panel has declared the government actions in Venezuela to be crimes against humanity and organized relief funds, but they have yet to take any punitive action against Maduro.

In early January, the American Treasury gave the green light for Americans to conduct business directly with Guaidó’s movement, giving them purview over any Venezuelan assets in the US and diplomatic relations. This endorsement still means strikingly little for the Venezuelan citizens.

Venezuelan citizens have little time to pay attention to politics. Most don’t have access to television or the streaming on social media that the politicians are using to get their messages out. The day-to-day is focused on food, shelter and housing in an economy that continues to fall prey to hyper-inflation. The pandemic has made the situation much worse, because the economy has only become a greater source of despair. Healthcare is not managed well, and with fear of a disease, protest is far from anyone’s first thought. The conditions have only worsened since the beginning of the political crisis, and there is little hope left in Guaidó’s movement. The Constitution seems to now be inconsequential, with a military controlled by the effective dictator, who also controls the legislature. Globally, Maduro’s continued rule reflects an inability to protect the citizens of a country whose government has been compromised. Words of support mean little without true action, and right now, there seems to be no meaning to the promises of Guaidó’s global supporters.