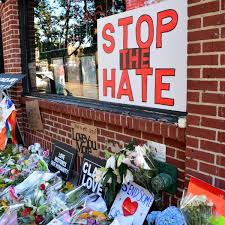 The ADL, or Anti-Defamation League, was founded in 1913 to combat the escalating anti-Semitic sentiment in the United States. Its main purpose is to “stop the defamation of the Jewish people, and secure justice and fair treatment to all. . .” Yet, in the first half of 2019 alone there were roughly 780 anti-Semitic incidents in the US, a near-historic high in the number of incidents since the creation of the ADL. There is no question that there is a degradation of a sense of security overcoming the nation; people are reluctant to openly express their religious beliefs and customs granted to them by the First Amendment.

Why are Anti-Semitic Attitudes so Prevalent?

It seems as if Americans are regressing, shifting away from the principles of acceptance and equality that have been fought so hard for throughout the nation’s history. The end of slavery, for instance, congregated African Americans into a society that placed them in the shadows for far too long. Similarly, the implementation of gender-neutral bathrooms inflicted a sense of acceptance, no matter one’s sexual orientation, in public places. Despite these accomplishments, the rise in anti-Semitic violence has been a major setback.

Since the 2016 Presidential Election and the victory for Donald Trump, there has been an increasingly hostile environment entangling the US. In fact, the ADL documented 2017 as the “worst year for anti-Semitic acts” since documentation by the league began. The President of the United States is the face of our country and must constantly deal with life in the spotlight. Thus, Trump’s avid use of social media to express his racist and extremist views gives the country a means for anti-Semitism to thrive. Additionally, current conflicts between Israel and Palestine may be translated into anti-Semitic incidents. The BDS movement is “a Palestinian-led movement for freedom, justice, and equality.” Many of the goals of the movement express sentiments against the Israeli state. While the movement itself does not necessarily promote anti-Semitism, the campaigns can induce tensions in the community that result in religious hate crimes. Also, the campaign may become a means for anti-Semitic people in the US to intensify their pre-existing biases into an infliction of violence.

On Apr. 27, 2019, a 19-year old man opened fire on the Chabad of Poway synagogue in Poway, California, killing one and wounding three others. On Sept. 17, 2019, a Hasidic man was recorded being beaten and robbed in Williamsburg, Brooklyn. A week later, on Sept. 24, 2019, the grounds of a synagogue in Boston, Massachusetts were covered in graffiti, directly over the Star of David in the pavement. However, most notably, on Oct. 27, 2018, a gunman killed eleven people and injured six others at the Tree of Life Synagogue in Pittsburgh. This massacre was among the deadliest of incidents against the Jewish community in the United States. These are just four of the thousands of anti-Semitic incidents that occur in the United States each year, with each intending to to reduce faith and induce fear in the Jewish community.

What is Being Done to Combat Anti-Semitism?

Surveys have shed light on the harrowing reality that faces modern America. While trends have shown a decline in anti-Semitic attitudes since 1964, they have also detected that most Americans are, in fact, concerned about anti-Semitic violence more than ever. People claim to want actions to be taken that revamp security and ensure the protection of all Americans’ First Amendment rights. Thus, the ADL has encouraged a number of actions to combat acts of hatred inflicted on the Jewish community. The league wants the nation’s leaders to “use their bully pulpits to speak out against anti-Semitism and all forms of hate and extremism.” Additionally, the ADL urges that school districts “do more to promote anti-bias and bullying prevention programs in schools.” Teaching the importance of acceptance and kindness to children at a young age is a vital step to fighting anti-Semitism in our nation.

While the ADL has promoted a variety of initiatives to combat religious hate crimes in the United States, the Jewish community has also made it a priority to stand up against acts of anti-Semitism. The OSCE Office for Democratic Institutions and Human Rights (ODIHR) published a guide entitled Understanding Anti-Semitic Hate Crimes and Addressing the Security Needs of Jewish Communities. The guide stresses the need of raising awareness of the prejudices and attacks faced by the Jewish community as a vital step to increase knowledge and ensure safety. Additionally, while increased security and metal detectors can bring a sense of security to people as they practice their faith, it highlights   the reality that unfortunately, these safety measures are necessary. Even in the current polarized and anti-semitic climate, the Jewish community is committed to  practicing its faith, standing proud, and not fearing the rampant threats that impact its members everyday lives.