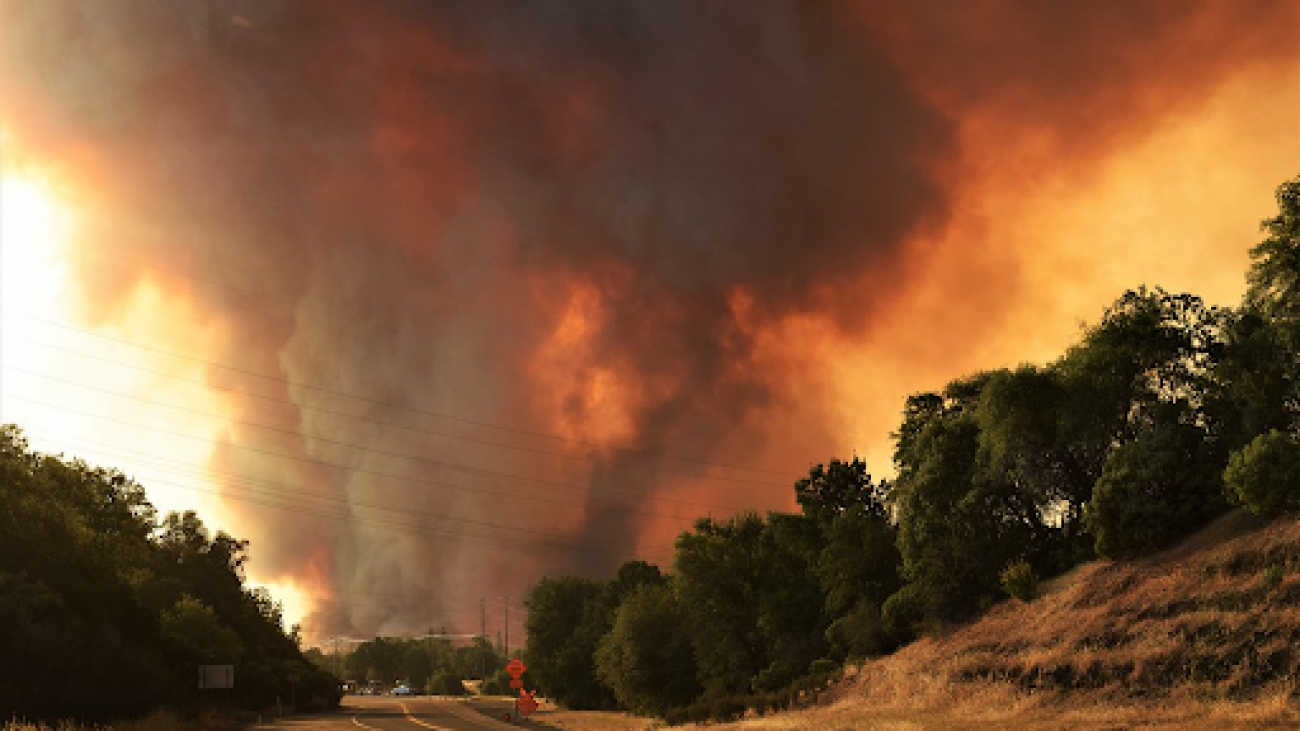 Pacific Gas & Electric (PG&E), the largest utility company in the country, has been held responsible for multiple wildfires over the past few years. These fires have burned tens of thousands of acres of land, destroyed thousands of homes and structures, and killed tens of thousands of people. In January of 2019, PG&E filed for bankruptcy protection after estimating that the company faced over $30 billion in wildfire liabilities. After being found responsible for the most destructive wildfire in California history just months later in May, PG&E faced an additional $10.5 billion in liabilities. Given the severity and urgency of the issue at hand, Governor Gavin Newsom signed comprehensive wildfire legislation within a week of the fire. After hearing arguments that this bill, Assembly Bill 1054, could be unfair and unconstitutional, the California Public Utilities Commission determined that there was no constitutional issue at hand. Thus, final approval was granted to implement AB 1054 in California.

PG&E has faced a long record of issues with regulators over the last 25 years. Pressure to burnish on-time results, falsified records of ground marking at excavation sites, and withholding of required information are only a few examples of the company falling “short of the high standards of integrity and ethical action to which the company is committed.” As a result of its serious safety violations, PG&E has paid more than $2.6 billion in state and federal penalties and lawsuit settlements. Despite multiple warnings and already being under federal probation for its prior actions, it seems that PG&E is still engaged in the same cycle of mismanagement and carelessness. In fact, its most recent safety violations have resulted in multiple wildfires and the loss of lives.

The North Bay fires of 2017 claimed 46 lives, scorched over 245,000 acres of land, and destroyed 8,900 residences and other structures. The California Department of Forestry and Fire Protection, or CalFire, determined that these 12 individual fires were started by PG&E-owned power lines.

The 2018 Camp Fire claimed at least 88 lives, burned at least 153,000 acres, and incinerated 14,000 residences and other structures. CalFire determined that this fire was started by PG&E-owned power lines.

While PG&E has been mostly spared criminal charges for its equipment sparking these wildfires, they still face billions in civil damages. A California law regarding inverse condemnation holdsCalifornia utilities responsible for damages if their equipment causes a fire, even if they did not act negligently.

A number of factors, including climate change, management failure, and vision failure, have made it difficult for PG&E to keep up with its safety responsibilities. In fact, regulators found that in many instances, PG&E explicitly violated state law or could’ve done more to make its equipment safer. As a result, PG&E estimates that it faces at least $30 billion in wildfire liabilities for 2017 and 2018 fires alone.

In January of 2019, PG&E filed for Chapter 11 bankruptcy, citing it as the only option that would allow the company to continue normal operations, while dealing with the billions of dollars in liabilities sparked by its power grid infrastructure. Interim Chief Executive John R. Simon specifically identified customer, and community, safety and reliability as PG&E’s major focuses  while the company navigates through, and attempts to exit from, bankruptcy.

Creation of the Wildfire Fund:

The bankruptcy of California’s largest utility, paired with the horrific damage of repeated wildfires over the last few years, has drawn significant legislative attention to the issue. As a result, it took less than a week for Assembly Bill 1054, a utility wildfire liability bill package, to receive approval from the California Assembly, Senate, and Governor Gavin Newsom.

AB 1054 was criticized by some as an easy bailout for large utilities that violated safety standards, allowing them to escape real penalties for their wrongdoings. However, the fates of ratepayers, wildfire victims, and utilities are all financially dependent on each other.  If these utilities failed, then ratepayers would see spikes in their electricity bills, and wildfire victims wouldn’t receive payments. Thus, AB 1054 is intended to improve safety standards and accountability measures for California’s utilities, while simultaneously ensuring that they continue to provide power to as many customers as possible.

The most important aspect of AB 1054 is the establishment of a $21 billion wildfire insurance fund that utilities can use if their equipment ignites damaging fires. Utilities would contribute to half of the fund based on their individual histories of safety, while ratepayers would contribute the other half through the extension of a bond from the Department of Water Resources, which essentially amounts to a surcharge of about $2.50 per month. In order for utilities to access this fund, they must first obtain a yearly safety certification and comply with new inspections of electrical equipment. A key aspect of this safety certification mandates that utilities tie executive compensation to safety performance, which  PG&E did  in the past, but has failed to continue. In order to ensure that PG&E has a timely restructuring process, PG&E is not allowed to access the fund unless it exits Chapter 11 Bankruptcy by June 30, 2020.

Furthermore, the three largest utilities in California, PG&E, SCE, and SDG&E, must pledge to spend $5 billion on fireproofing their equipment. This fireproofing can occur by insulating transmission and distribution lines, clearing surrounding tree brush, replacing wooden power poles with steel or composite ones, or providing protective covering over important infrastructure. Though utilities usually raise rates to pass on the cost of capital expenditures to their customers, they will be hindered from doing so in this case.

Lastly, AB 1054 attempts to mitigate the impact of inverse condemnation on utility companies. Under inverse condemnation, utilities must pay if their equipment causes wildfires. However, if they prove that they acted responsibly under the circumstances, then they are able to pass off 100% of the costs to their ratepayers. Under AB 1054, the law would flip the burden of proof onto others to show that a utility company acted unreasonably. This caveat was designed to ease the financial consequences that utility companies would face in wildfire situations similar to those caused by PG&E.7

Supporters of the Wildfire Fund believe that AB 1054 will hold utilities accountable to new safety standards, accelerate victim settlements, and reduce overall wildfire risk in the face of increasingly harsh impacts of climate change. However, not everyone shares the same sentiments. In fact, San Diego attorney Michael Aguirre filed a lawsuit against AB 1054, on behalf of a pair of utility customers, in an attempt to stop its implementation. He argues that while the creation of the Wildfire fund might be prudent, it is unfair and unconstitutional.

Aguirre argues that the extension of the $2.50 monthly surcharge burdens California ratepayers without giving them “just compensation”, thus violating the U.S. constitution.  Ratepayers are overcharged by more than $3 billion for their portion of the fund, while companies are bailed out for their negligence. According to Aguirre, the lack of evidentiary hearings and cross examination, paired with determinations of fact without evidence, amounts to a clear violation of the due process clause of the14th Amendment. Furthermore, April Sommer, executive director of an environmental, Bay Area group called Wild Tree Foundation, also believes that the required safety certification amounts to nothing more than a rubber stamp, because the burden of proof shifts onto customer advocates instead of the company itself.

Approval of AB 1054:
Despite such arguments, all five commissioners on the California Public Utilities Commission (CPUC) determined that the continued imposition of a $2.50 surcharge under AB 1054 to fund the Wildfire Fund was both just and reasonable. Because of the large-scale risks of wildfires associated with utilities, the multitude of ratepayer benefits that would accompany the surcharge, in terms of cost and safety, fulfill just compensation requirements. Included in the benefits are the avoidance of utility credit downgrades (which would pass higher borrowing costs onto customers) and faster payments to wildfire victims. Furthermore, utilities will be required to pay half the cost of all wildfire damages, even if they aren’t found negligible.In the past, they could pass the full burden of those costs onto ratepayers.

Even after CPUC approval of the Wildfire Fund, Aguirre will continue to fight this law. He believes that “what [they] could not get the CPUC or the Legislature or the governor to do, [they] will get the United States District Court to do.” It remains to be seen what decision the federal court will make.

Contrary to critics, commissioners believe that AB 1054 won’t coddle PG&E. Because PG&E won’t be allowed to join the Wildfire Fund until it exits Chapter 11 bankruptcy without raising bill costs for its ratepayers, this piece of legislation is expected to raise safety standards, hold utilities accountable for their actions, and ensure continued service to customers.

However, a key safety precaution taken by utilities recently is the shutting off of power to combat the increase of probability of fires In October, SCE shut off 27,000 customers’ power due to Santa Ana wind conditions, while SG&E shut off 7,300 customers’ power due to San Diego wind gusts and temperatures. Similarly, PG&E denied power to nearly 800,000 customers across Northern and Central California due to dry, hot, and windy weather. Though utilities have been criticized for shutting off power, these safety measures have been seen as a part of a more advanced and strategic plan. Moving forward, these utilities will have to find a way to keep up fire prevention strategies, while still providing power to their customers. Climate change has created a new reality for the state of California. As the costs and liabilities associated with increasingly catastrophic and frequent wildfires continue to batter Californians, this wildfire fund is expected to be the first step of many to benefit and protect both utilities and customers.

Ellen Wang is a junior from Plano, Texas studying Political Science and Economics (Finance Concentration) and minoring in Biology.