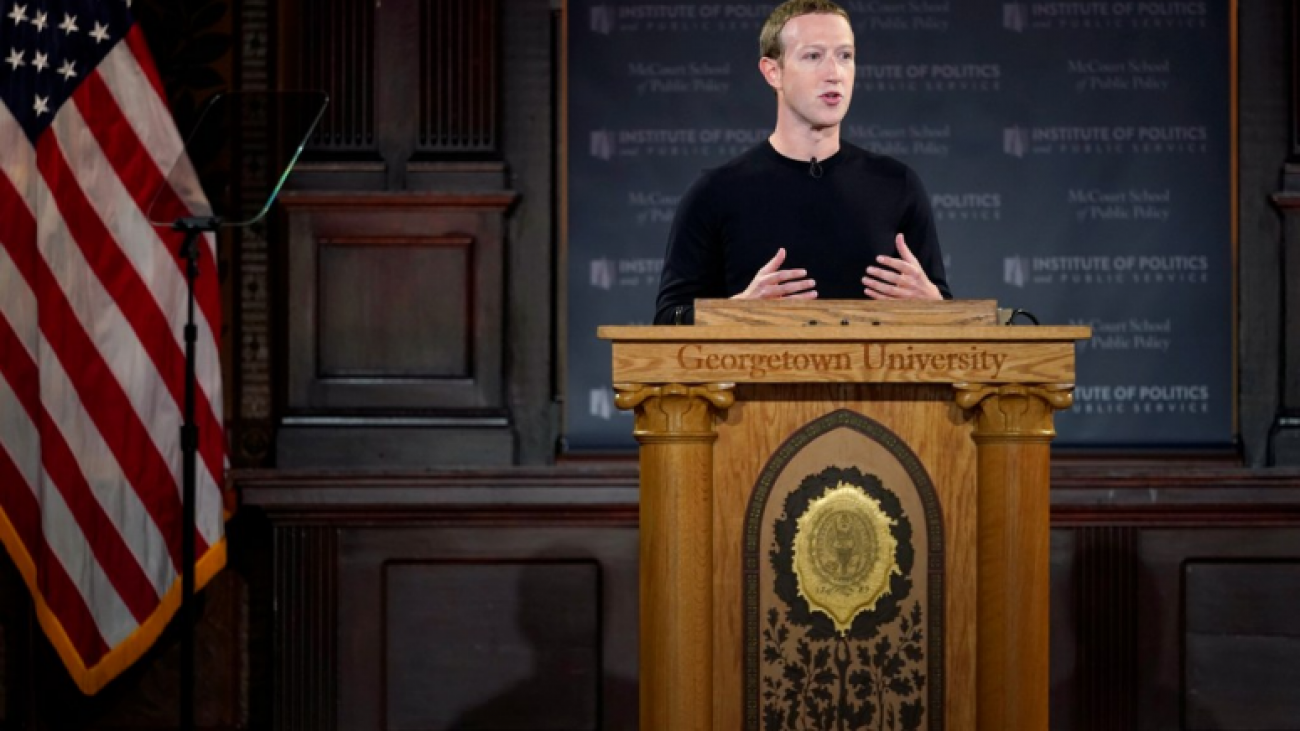 While speaking at Georgetown University on Oct. 17., CEO Mark Zuckerberg stated that Facebook will not be implementing any further restrictions on bad speech on their servers. This comes to the dismay of many who hope that the flux of falsified information on Facebook will come to a curb following repeated calls for better policing of fake news on the platform.

An Attempt To “Preserve Free Speech”

Zuckerberg defended his stance on the issue by saying that “You can’t impose tolerance top-down.” Zuckerberg referenced the growth of less liberal Chinese technology platforms as a warning that it is up to Facebook to preserve online free speech as different social media companies compete for global users.

He used America as a standard for free speech and free speech policy enactment in comparison to the global scene where the platform reaches.

Because it is a publicly traded company, Facebook has a responsibility to its shareholders to maximize profits and abide by the laws of all constituencies it is used in. However, Facebook’s moral mission is what separates it from most other corporations, as it pledges to build community through free expression. These two missions, the former being financial and the latter being moral, rationally should be at odds with one another and in competition for the majority share of Facebook’s attention. It is seemingly difficult to simultaneously not endanger profit margins by skipping over regulations while still acting in compliance with global governmental procedures.

However, Facebook has taken a major step to achieve a sort of middle ground in this challenge. A recently established Oversight Board allows the company to bolster its free expression commitment. It does so by requiring governments to justify their requests to take down certain media on the platform. All requests must stay in line with the policies outlined in the International Covenant on Civil and Political Rights (ICCPR). More specifically, Article 19 of this document lays out explicit conditions for when and how governments are permitted to restrict free speech. By enacting this document, Facebook has successfully followed its commitment to free speech, while at the same time placing the burden on international governments themselves to decide what is fair and what is not instead of the company itself.

While Facebook may have used the ICCPR as inspiration for their Oversight Board and content rules, inspiration is the key word in that these standards are not reliant on the Covenant, as the company sparingly cites the ICCPR in take-down requests.

Future Implication In The Technology Industry

Currently, the ICCPR (including Article 19) is universally applicable to international states. However, the debate remains on whether it is fair to apply it to technology companies in lieu of constantly shifting local laws and broad community standards. This debate follows the general trend towards people seeking multinational companies to abide by and prioritize international laws and treatises.

Facebook has made repeated references to its use of the ICCPR as a guideline for the development of community standards. Monica Bickert, the Vice President for Global Policy Management for the company, recently stated that Facebook “look(s) to international human rights standards” when drafting content rules. However, Facebook has yet to rely on the ICCPR to challenge any government take-down requests.

As the largest social media outlet in the globe, Facebook is well-positioned to be a leader in the protection of global free speech and compliance with international policy. The decisions made in its board rooms set a major precedent for global online usage, and it seems as though Facebook has a mandate to act accordingly. As a leader in the tech field, Zuckerberg and his team are seen as the face of not only social media policy, but global internet traffic policy. Their actions in terms of the unfolding ramifications of our growing web space hold great importance for the rest of the industry and the trajectory of the aforementioned internet traffic policies.

Jonathan Schachter is currently a freshman at Duke University from Orange, Connecticut. He is studying Public Policy.