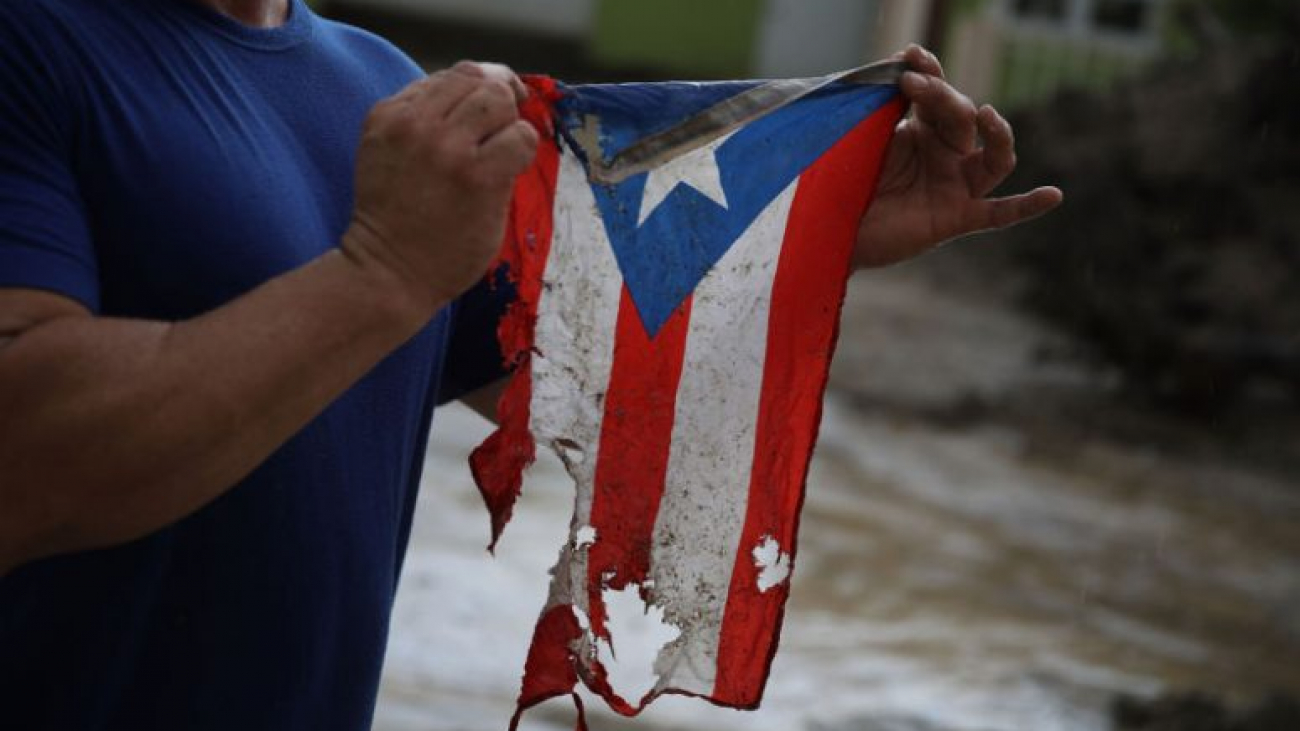 Summary: Puerto Rico currently faces the most alarming financial crisis in its modern history: a bankrupt state unable to pay the more than $75 billion it owes as national debt, accompanied by a downward economic spiral of migration, high unemployment, and a shrinking labor market. Puerto Rico’s unique relationship to the United States, its status as an ‘unincorporated territory’, has undermined the island’s sovereignty, especially in relation to its plans for economic restructuring. Under the tight control of US Congress, and particularly after the devastation caused by Hurricane María’s passing on Sept. 20, 2017, Puerto Rico’s chances of a quick and stable recovery certainly seem bleak.

On Sept. 20, 2017, media sources all around the world presented images and videos of Puerto Rico after Hurricane María, a category 5 storm which killed over 4,600 people, plowed through the island, and caused insurmountable devastation. As disastrous as it was, this event by itself is not what led the island to a state of crisis. Rather, Hurricane María exacerbated Puerto Rico’s social and economic challenges, which had already been unfolding many years before the storm hit.

Puerto Rico’s economic climate had been deteriorating for more than a decade before Sept. 2017. Between 2005 and 2016, Puerto Rico’s economy was shrinking at an annual real rate of 1 percent per year. Such contraction led to the government’s dependence on borrowing to finance its operations. Lara Merling, a Research Associate at the Center for Economic and Policy Research, writes, “After a lost decade in terms of growth [from 2006-2016], the island had lost about 10 percent of its population, had a poverty rate of 46 percent, and the government was effectively bankrupt.”

Despite the government’s previous attempts to reduce spending through the implementation of austerity measures, decades of debt-based government spending led Puerto Rico’s governor, in June of 2015, to declare the national debt to be unpayable. How, then, should the island deal with this bankruptcy? In answering this question, we find that Puerto Rico’s status as a commonwealth of the US, officially labeled a Free Associate State, tightly determines and complicated the island’s mechanisms for both debt repayment and economic restructuring.

Following the United States’ invasion of Puerto Rico, by then a Spanish colony, in 1898, the Spanish-American war took place. It quickly ended with the 1898 Treaty of Paris, under which Spain ceded its colony to the United States. The US incorporated Puerto Rico as a ‘territory’, a possibility offered by the US Constitution’s Art IV, § 6, cl 2., which grants Congress “Power to dispose of and make all needful Rules and Regulations respecting the Territory or other Property belonging to the United States”.

Under the Organic Act of 1900, also known as the Foraker Act, the US established an authoritarian form of government for Puerto Rico, where the US President had full control over local institutions. Later in 1917, The Jones-Shafroth Act was enacted, which superseded the Foraker Act and granted US citizenship to anyone born in Puerto Rico on or after April 25, 1898. It is important to note that Puerto Ricans with this status do not have access to all of the benefits that mainland US citizens do, evidenced in the fact that Puerto Ricans cannot vote in presidential elections and are not represented by any voting members of the US Congress.

As an unincorporated territory of the United States, Puerto Rico exists under the dollar’s monetary union. As such, the enactment the Jones-Shafroth Act also allowed Congress to decide that bonds issued in Puerto Rico would be ‘triple-tax-exempt’. This means that buyers did not have to pay local, state, or federal taxes on these bonds, making them a source of high interest for investors. Furthermore, the island is also considered a US port under The Merchant Marine Act of 1920, meaning that only domestic merchant ships can enter Puerto Rico’s ports, which significantly increases the costs of importing and exporting goods.

Soon after the end of the Second World War, the Truman administration was faced with the global pressure of the decolonization movement. The president then developed a political formula that would transfer limited authority to a local government in Puerto Rico. In 1952, the constitution of the Commonwealth of Puerto Rico was ratified, which granted a certain autonomy to the island with a local Governor as leader, but still ultimately responded to the President’s authority and the US Congress’ policy decisions.  The creation of this Free Associate State, the commonwealth status, allowed the US to have the United Nation’s General Assembly agree to remove Puerto Rico from the list of non-self-governing territories under the terms of UNGA Resolution 748(VIII) issued on Nov. 27, 1953.

The institutionalization of this Free Associate State in 1952 was popularly understood as a miraculous opportunity for Puerto Rico’s path towards decolonization. On the one hand, the island had gained a certain autonomy and sovereignty that respected its local culture and no longer had to confront the United States’ colonial efforts of ‘Americanizing’ its Caribbean territory. More importantly, Puerto Rico also maintained its political and economic alliance with the United States, a condition which facilitated the injection of capital into the island. Puerto Ricans also retained their US Citizenship under this new status, which meant that they could travel to and from the mainland US without any migration barriers.

Today, nonetheless, Puerto Rico’s commonwealth status, which has always been defined under the US Constitution’s ‘Territory clause’, has proven to be colonial in its essence, and Puerto Ricans are, without a doubt, second-class citizens of the United States. To this day, Puerto Ricans continue to have no voting representative in the US Congress, nor can they vote in the presidential election if they are not residing in the US mainland. In this sense, the supposedly ‘decolonial’ nature of the island’s transformation in 1952 can now be called a farce.

This colonial relationship, which the United States had supposedly eradicated in favor of the island’s democracy and self-determination over 60 years ago, has been poignantly critiqued all around the world, especially after the events of Hurricane María. The Jones Act of 1920, for example, made the transportation of goods and emergency supplies into the island an unnecessarily expensive and inefficient process. Recently, public protests and social media awareness against this Act, which essentially assures that the US government maximizes its revenue collected from the islands imports, forced President Trump to temporarily waive this Act for the sake of emergency reliefs. Indeed, the passing of Hurricane María left the island in a profoundly vulnerable state, a position that many fear will be taken advantage of rather than improved by US government and business representatives.

Debt Crisis and the Limits of Free Association

After the ratification of its 1952 constitution, Puerto Rico witnessed a massive process of industrialization and booming markets, a process almost entirely fueled by private investment. It was the island’s tax breaks, its constitutional guarantees of debt repayment, and its triple-tax-exempt bonds issued under US legal jurisdiction that made this territory so attractive to investors.

Twenty years later, in the mid-1970’s, an economic crisis hit Puerto Rico, and the postwar wave of expansion was shown to have dramatically reduced its trending growth. Increasing levels of public debt, increasing unemployment, and constant migration were all factors that evidenced a contracting economy, which concurrently reduced the government’s revenue. Nonetheless, the island’s relationship to the United States granted Puerto Rico easy access to credit. Macroeconomic conditions deteriorated for many decades, an unquestionably clear trend that was reported by multiple sources and credit rating agencies. And yet, Puerto Rico’s bond market continued serving seemingly confident investors, thus further intensifying the nation’s level of indebtedness.

By 2014, with the downgrade of Puerto Rico’s bonds, the arrival of hedge funds that started buying discounted bonds, and the inability of government to increase its revenue through its continued cuts in public spending, it became clear that a massive debt crisis was imminent. Notably, Puerto Rico’s status as an ‘unincorporated territory’ of the US did not grant the island access to Chapter 9, Title 11 of the United States Bankruptcy Code, a law that allows municipalities to declare bankruptcies and to restructure their debt.

Without access to this mechanism, which played a hugely significant role, for example, in the case of Detroit’s 2013 debt default crisis, the island attempted to address its crisis by passing the Public Corporation Debt and Enforcement and Recovery in June 2014. This Recovery Act attempted to create a restructuring process similar to Chapter 9 bankruptcy. Nonetheless, creditors claimed that Puerto Rico’s territorial status negated its authority to establish such a restructuring mechanism, a dispute that made it all the way to the US Supreme Court and ultimately ruled in favor of creditors. As such, by the end of 2015 the island’s government had defaulted on most debt payments. Unlike the case of Argentina in 2001 or Greece in 2010, Puerto Rico’s limited sovereignty did not grant access to international financial institutions like the IMF, and it was entirely up to the US Congress to decide what was to be done with Puerto Rico’s insolvency and its constitutional obligations to repay its national debt.

Instead of including Puerto Rico into Chapter 9 bankruptcy protections, in June of 2016 US Congress enacted the Puerto Rico Oversight, Management and Economic Stability Act (PROMESA). This law designed an entirely new framework to manage the islands financial issues, with the establishment of a Financial Oversight and Management Board (commonly referred to as ‘la Junta’ or ‘the Board’), comprised of a total of seven bipartisan members appointed by President Barack Obama, none of which were democratically elected by the people of Puerto Rico. With an authority that effectively supersedes that of the local government, the Board is in charge of managing the island’s finances and assuring the balance of the island’s budgets.

The Board’s actions and its public messages have been the source of much debate, which hinges both on Puerto Rico’s limited sovereignty and on the Board’s increasing insistence on implementing austerity measures so as to assure a repayment for creditors. Particularly after the passing of Hurricane María in 2017, both the island’s governor, Ricardo Roselló, and the Board must constantly choose between either addressing necessities of an increasingly impoverished population or prioritizing the implementation of severe economic reforms so as to increase public revenue and assure debt repayment. While Gov. Roselló has consistently expressed himself in favor of a privatization model for the island’s economy, in compliance with the Board’s insistence on reducing public spending, his authority is ultimately undermined by the federally appointed oversight board. In this sense, PROMESA has been read as yet another example of Puerto Rico’s colonial relationship to the United States, for the island’s local government is undemocratically overpowered by the US Congress’ decisions.

Puerto Rico’s debt crisis reflects the consequences of a unique relationship with the United States, a relationship that, for over 100 years, has primarily valued the island in terms of the profitability it represents for US investors. As such, it is not surprising that the US Congress has dealt with this crisis in a way that undermines local authority and the collective interests of Puerto Ricans, while assuring instead a legal framework that favors the concerns of private investors and hedge fund firms. Recognizing Puerto Rico’s unequal structure of legal power vis-à-vis the United States, a structure which effectively incentivized the creation of this debt, we should ask ourselves: How seriously do we want to take Congress’ claims of a full debt repayment, and why should we not reevaluate its constant siding with private investors when it comes to the case of Puerto Rico?

Author Bio: Juan J. Jiménez is a senior from San Juan, Puerto Rico. He majors in Global Cultural Studies, with a certificate in Politics, Philosophy and Economics.