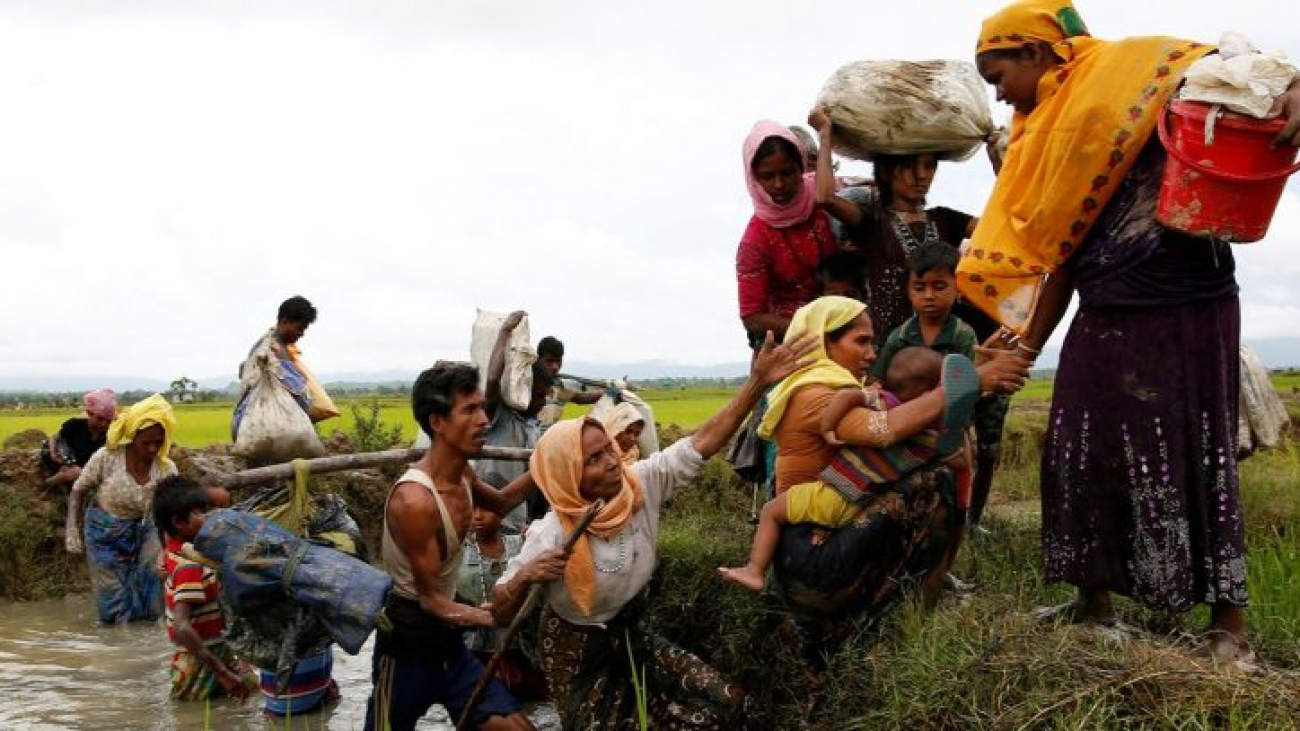 Summary: Hundreds of thousands of Rohingyas are fleeing from a persecution of the Myanmar Army. The international community is struggling to classify this persecution and take action correspondingly.

Hundreds of thousands of Rohingyas, a Muslim-majority ethnic minority group  in Myanmar, are fleeing across the border amid a mass persecution by the Myanmar Army.

As a humanitarian crisis, the persecution has drawn wide criticism. However, from a legal perspective, many questions remain to be addressed: what is the domestic legal basis for the persecution? Does it violate international law? If so, on what grounds should the international community take action?

The persecution started in October 2016 when several Rohingya militants attacked and killed nine police officers. The conflict soon triggered a military crackdown against Rohingya people, most of whom live in Rakhine State, a relatively remote region on the Western coast of Myanmar. The government, on the one hand, claims the persecution to be a legitimate counterinsurgency campaign, which only targets terrorists and insurgents. On the other hand, evidence suggests the large-scale violence has become indiscriminate and vicious, involving forced deportation, extrajudicial killings, gang rapes, arsons, and other atrocities.

Rohingya people, mostly Muslim, have lived in the predominantly-Buddhist Myanmar for generations but have largely remained stateless. Historically, Buddhist Rakhine and Muslim Rohingya in Rakhine state, formerly known as Arakan, have always been in conflict. During World War II, Japan invaded Myanmar when it was still under British colonial rule. The pro-Japanese Buddhists and pro-British Muslims fought a fierce proxy fight in 1942, in which tens of thousands of Rohingyas fled from the country to avoid massacre.

Many Rohingyas gradually returned, trying to resettle after Myanmar’s independence in 1948.  Myanmar issued a citizenship law in 1982, stating that only those whose families had lived in the country prior to 1948 and those who belonged to the eight majority ethnic groups could achieve full citizenship. Rohingya was not a recognized ethnic group and most Rohingya people were denied citizenship due to their unverifiable ties to Myanmar. Without a citizenship, Rohingyas have also been met with various restrictions pertaining to public education, government work, freedom of movement, marriage, and even voting.

Rohingya insurgent groups have prevailed under repression and discrimination. Most of them are nationalist, separatist, and Islamist, represented by the Arakan Rohingya Salvation Army, the Rohingya Liberation Party, and the Rohingya Patriotic Front. The Arakan Rohingya Salvation Army, for example, issued the attack against the Myanmar security forces in last October, which led to the government’s counterinsurgency campaign that continues until today.

Ethnic Cleansing and/or Crimes Against Humanity?

Major media outlets have referred to the persecution as ethnic cleansing or crimes against humanity. Both types of violence are distinct from conventional warfare in that they target non-combatants and usually enact violence beyond military necessity. The United Nations and the international community at large have recognized both to be unacceptable but there are few concrete international treaties that prohibit them.

Ethnic cleansing is not yet an independent crime under international law. Its current UN definition is based on an ad hoc investigation into the ethnic cleansing which occurred in 1992 in the territory of the former Yugoslavia. A United Nations Commission of Experts mandated to investigate this incident defined ethnic cleansing as “rendering an area ethnically homogeneous by using force or intimidation to remove persons of given groups from the area.” Potentially coercive practices include murder, torture, rape, etc. In other words, although perpetrators of ethnic cleansing often resort to violence during their attempt, their ultimate goal is not to exterminate a certain demographic group, but to displace them.

Top UN human rights official Zeid Ra’ad Al Hussein condemned the persecution against Rohingya people to be “a textbook example of ethnic cleansing” in an address to the UN human rights council in Geneva last month. By virtue of the sheer number of Rohingya people who have fled the country in the past year, the Rohingya crisis has met the definition of ethnic cleansing. However, there have been increasing signals that the persecution is more than just ethnic cleansing. The large-scale infanticide, extrajudicial executions, and gang rapes perpetrated by the Myanmar military have clearly exceeded the necessary standard to merely deport the people.

The UN Committee on the Elimination of Discrimination against Women (CEDAW) and the Committee on the Rights of the Child stated earlier this month that the Myanmar authorities’ violence against Rohingya women and children has mounted to crimes against humanity. In the past year, Rohingya women and children have suffered from mass sexual abuse, indiscriminate executions, and infanticides. They are also exposed to extreme poverty and malnutrition during their forced deportation. Human rights organizations usually attribute more attention to women, children, and the elderly. Nonetheless, an over-emphasis on individual human rights may have overshadowed the fact that the persecution has sorted out victims by their collective identity as an ethnic and religious group.

Genocide is a more severe crime than ethnic cleansing and crimes against humanity because it stems from more malignant intentions and involves more atrocities, and is a recognized crime under international law. Genocide is subject to universal jurisdiction: every state is obliged to prohibit genocide in foreign countries and to prosecute perpetrators. The 1948 Geneva Conventions codified genocide as an independent crime, largely in response to the Nazi Holocaust during World War II.

By its definition, genocide means any of the following acts committed with intent to destroy, in whole or in part, a national, ethnical, racial, or religious group: killing members of the group; causing serious bodily or mental harm to members of the group; deliberately inflicting on the group conditions of life calculated to bring about its physical destruction in whole or in part; imposing measures intended to prevent births within the group; forcibly transferring children of the group to another group. Common wisdom often assumes genocide to be a crime intended to exterminate every single member of a group. However, a persecution suffices to be genocide so long as it inflicts irreparable harm on a group.

Historically, genocide is rare because it is rather hard to conclusively identify that the real intention of the persecutors is to physically destroy a group. Regarding the Rohingya crisis, the Myanmar authorities have denied any accusations by insisting the persecution to be part of a legitimate counterinsurgency campaign. The assertion becomes more tenable when Rohingya insurgency groups vow to intensify their retaliation against the government. Nevertheless, how can we determine the retaliation to be a violent rebellion against the government’s rule or merely a self-defense? It is also hard to differentiate genocide from ethnic cleansing and crimes against humanity. After all, how can we determine if violence is merely the tool to drive the Rohingyas out of the country, not the goal itself? How can we determine the army is only targeting potential insurgents, rather than anyone who holds membership in the group? These are hard questions to which no satisfactory answer has been provided.

Neighboring Bangladesh has housed most of the Rohingya refugees who fled across border. The United Nations, United States and transnational organizations such as Organization of Islamic Cooperation have attributed the blame to the Myanmar government. The European Union and the United States have also provided humanitarian aid to the Rohingya refugees. International organizations such as Human Rights Watch (HRW) and Amnesty International continue to call for international donors to offer more humanitarian assistance as well as attention from the UN Security Council. However, no substantial intervention is on the horizon.

A persecution as such usually invites nothing more than routine condemnation against persecutors and humanitarian aid toward victims. Firstly, foreign states are reluctant to interfere with another state’s sovereignty, even when they are both allowed and obligated to. Secondly, external actors all have their own benefits at stake. A substantial intervention requires troops, military resources and financial support. Their diplomatic interests are also not to be ignored. Last but not least, it is hard to evaluate the extent of atrocities and classify them accurately, especially with regards to how and when they begin. Different types of violence needs different responses, but international law is traditionally vague and depend on ad hoc negotiations to reach a decision. It seems there is no exception even when hundreds of thousands of civilians are suffering.

Author Bio: Xinchen Li is a junior from Shanghai, China. She majors in political science and economics.