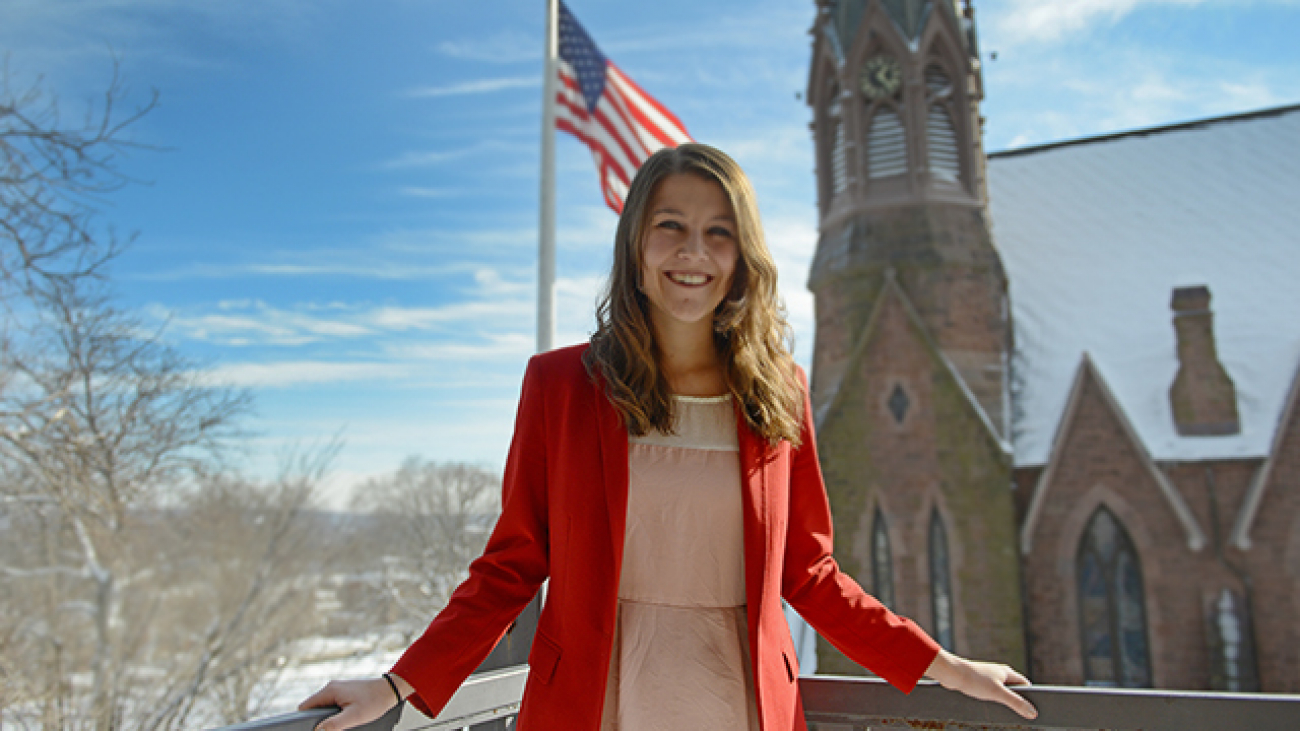 Summary: Shannon Welch is a third-year law student at Duke Law School. She has worked with the Coalition Against Gendered Violence, the Clemency Project, The Duke Journal of Gender Law and Policy, and the Duke Law Wrongful Convictions Clinic. Currently, Welch serves as Executive Director for the Innocence Project at Duke Law. Last week, Juris sat down with her to discuss that initiative.

Juris: Could you tell me a little bit about your educational background?

Welch: I’m from Washington, D.C. and I went to undergrad at Wesleyan University up in Middletown, Connecticut –The Wesleyan. I was an American History and American Government double major. We don’t really have a pre-law major at Wesleyan, so I took a few legal courses – Constitutional Law and Civil Rights – and that started piquing my interest in law. I interned at the US Attorney’s Office in DC in my sophomore year, and I worked as a victim advocate. That’s when I really got involved in criminal justice. I was working for a prosecutor’s office, but I was just seeing injustice, as a third party to it all, representing victims.

W: I really liked the small size. It’s only around 800 students, and I wanted to be a big fish in a small pond. I wanted there to be more opportunities than students.

J: Could you talk a little about the mission and work of the Innocence Project?

W: First, the Duke Innocence Project is different from the Wrongful Convictions Clinic. It’s a student organization of predominantly first and second-year law students. There are two sides to the initiative. There are active cases, which are what you think of when you think of the Innocence Project; we take on people who are claiming that they’re innocent, and we do an investigation to see if we think they are guilty or if there were any injustices – that can be a document review, or interviewing, or writing memos. Then we have the Special Teams side, which does events planning, reintegration work, some legislative and policy-making work, and responds to jail mail. Overall, we try to work at the beginning of the process – collecting evidence for claims of innocence – and then on the back end, helping reintegrate and educating the public. Then the Wrongful Convictions Clinic takes the cases, sometimes from us and sometimes from others and litigates them in court.

J: How did you get started with the Innocence Project? What has your role been along the way?

W: My first year, I was on an active team, and in my second year I led the reintegration team, so I was working with exonerees and throwing together the Thanksgiving we do every year for them, and now I’m the Executive Director. When I got to Law School, I had minimal understanding of the Innocence Project, but we have this speaker – the recently-deceased Darryl Hunt – who used to come to speak to the incoming class of law students during Lead Week. We watched his documentary, and he spoke about the injustices he faced, what he wants out of lawyers, and how to be a good lawyer. That really struck me; everyone cries during the documentary. He actually passed a year ago, but he inspired me to apply [to the Innocence Project], and, once I got in, I got hooked.

J: How successful do you feel the Innocence Project is here?

W: Well, we do not do DNA cases, which is an important distinction. In that way, our cases are, in my opinion, harder because there is no one piece of physical evidence that we can just take and test against something else. It also means, for ourselves, that it’s harder to actually know they’re innocent. I think we usually get someone out once a year in the Clinic. We’re not yet there for this year, but I’m hoping; I have faith that my client is next. I think we are very successful, in that we do take these harder cases. There’s an idea of innocence and an idea of wrongful conviction, but they’re different. Being innocent is like “I know you didn’t do this crime.” Being wrongfully convicted is more broadly that your conviction was not afforded the constitutional protections we think are required to have faith in a conviction. I think what we do is try to shed light on that second one. I can’t give you a bulletproof, 1-in-a-million “it’s not this guy,” but we always believe our clients are innocent – those are the cases we take. We’re showing holes in the system; we’re trying to unearth farther back in the process what’s wrong in investigative techniques, what’s wrong in prosecutors’ offices, what’s wrong with the way we treat people in the state. In that way, our work has had a large impact that isn’t necessarily measured in who we’ve gotten out or not.

J: Along those lines, what are some specific policies or laws that you think are particularly harmful on the investigative side?

W: One big issue is not taping confessions. Confessions are very damning in court, and the circumstances that surround them, and the crop of false confessions that have happened; I think a lot of that could be alleviated by taping confessions. That’s just one clear, concrete thing. And I think the electing of – I’m not saying there aren’t positive reasons why we elect judges and prosecutors, and have that accountability – but that political nature makes it so people are not only harder on what they see as ‘severe crime’ and really sympathetic with victims, but they’re less likely to re-examine [decisions] because that person might still be there, or they have close relationships with law enforcement. And you don’t want to be the one who’s undoing people’s work. Also, I think a lot of our reliance on what we see as “science” [is problematic]. There’s been a lot of debunking of fire science, or bite-mark science, and things that, in court, can seem so bulletproof, and then 10 years later we realize that those core patterns mean nothing. And just underfunding of public defenders’ offices. Through no fault of their own, they’ve become, in many ways, a plea-bargaining office because that’s what they have the resources to do. And indigent defendants can’t afford anything better. The last thing that we’re working on right now, which is on the exoneration side, is that we’re working to put together a bill for the state legislature to make compensation for wrongfully convicted individuals easier to obtain. Right now, if you’re exonerated in court, you still don’t automatically get compensation; you either have to get a pardon from the governor, which is highly political, or you have to go the Innocence Inquiry Commission and they examine your file and see if they can show you’re innocent. And that’s a lot of work, so they mostly only do DNA cases. We have 6 exonerees, and only 1 pardon—so 1 person has gotten compensation, and that’s unacceptable because a court of law has said that the other ones are wrongly convicted. You have 1 person who gets thousands and thousands of dollars, and other people who don’t even necessarily get their records expunged, so they can’t get the jobs they need, they can’t get housing, they can’t get a lot of things.

J: What has been your favorite part of working with the Innocence Project?

W: I really like the Thanksgiving every year. That’s when I decided I wanted to lead the Innocence Project. It’s getting to interact with the exonerees one-on-one and get involved in their lives, meet their significant others and their children, hear how they’re doing. And for me, it kind of summarizes a lot of what innocence work is about because you’re really excited to get someone out of prison, right? But on the other hand, it’s not a pure pop-champagne celebration because this person’s been in for years and years. So the Thanksgiving is just a really complex event where people are very thankful that they’re there, but also really having a hard time grappling with what they went through. And they form their own supportive community with each other and with students and get to share, which is a really important part of their healing process.

J: So what kind of people do you bring in to work on your end?

W: Most of our members are law students, and that’s because we have way too much interest for the roles. We do have a handful of undergrads – I know most of them are working as interns for the professors, and that’s how they got involved – and we had so many undergrads who wanted to get involved, and I unfortunately couldn’t take them on. Though it would be really interesting to see an undergrad organization pop up that could help with some of the lobbying work for legislative policies or events, I just don’t have the space to organize them. And then most of the attorneys are the professors, though for some of our cases we bring in outside attorneys, but most of them are the three professors, and law students.

J: Is there anything I didn’t ask that you wanted me to ask?
W: The question I get asked most is “Why do I want to be a prosecutor, and work for the Innocence Project?” I think a lot of people think that if you want to get involved in the Innocence Project, you have to want to do the defense side, and most of what I’ve found is that that’s not true. A lot of people who have been in leadership positions want to be prosecutors, and that’s because it’s holistically about a better justice system [more so] than about prosecutors are bad or police are bad. On a whole, no institution is, en masse, bad. But I think it’s just a general interest in procedural justice – that’s our big buzzword.

Jason Brovich is a sophomore majoring in Psychology with minors in Spanish and Computer Science. When he’s not interviewing for Juris, he is a tour guide for Duke, a resident assistant on East Campus, and a researcher for the Identity & Diversity Lab.